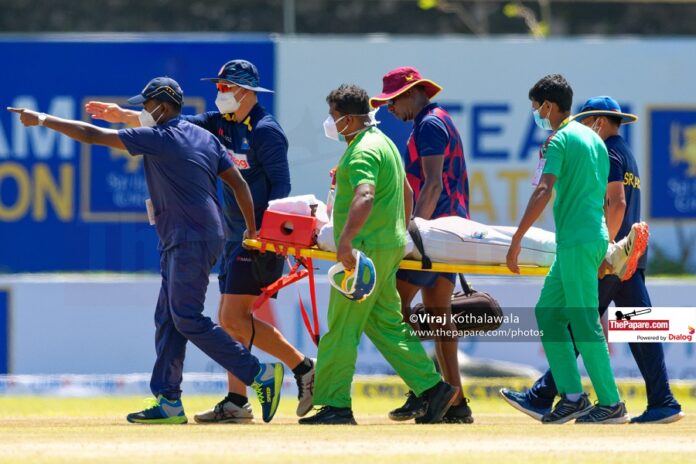 Jeremy Solozano, who made his debut in the 1st Test between Sri Lanka and West Indies, was forced off the field after being struck while fielding close to the bat.

Solozano, fielding at short leg, was struck with some force on the grille of his helmet when Dimuth Karunaratne played a pull shot and the ball flew directly at his face. He went down almost instantly, staying still on a ground for several minutes as medical staff attended to him.

He was conscious and seen talking to the officials before being stretchered off and into an ambulance before being driven to hospital for scans and observation.

According to West Indies Cricket, his ‘scans show no structural damage. He will be kept at the hospital overnight for observation.’

Further to this, sources say his participation in the rest of the game will be decided via concussion tests – if he is diagnosed with a concussion, he will play no further part in the game, in accordance with ICC’s Concussion Protocols.

The visitors will be allowed to make a like for like replacement for Solozano according to the ICC concussion substitute rule, if he is ruled out.