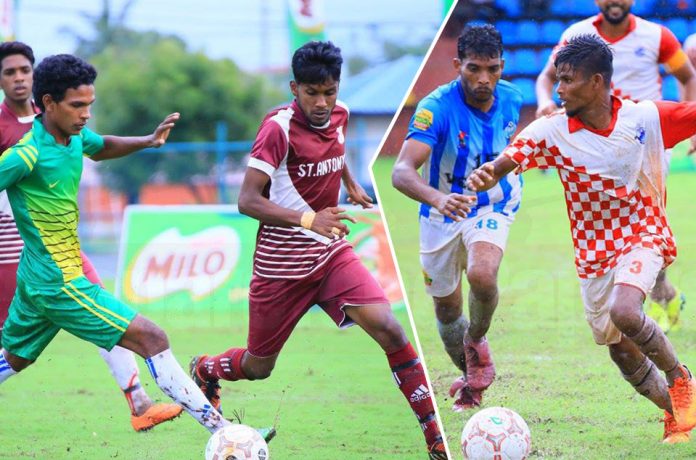 The 5th edition of the Milo Cup saw schools from the districts of Jaffna and Kilinochchi battling out in the U16 and U14 categories..

The tournament which spread over a month consisting of teams from Vadamarachchi, Point Pedro, Valikaamam, Jaffna, Islands and Maruthankeni regions saw numerous matches boiling down to the semi-final stages which was held at Duraiyappa Stadium on 1st November.

Jegameetpar SC defeated Iyanar SC 5-4 on penalties after it ended 2-2 at full time.

Jegameetpar defeated Kuppilaan Kurinjikumaran 2-1 and Thikkam Youth 2-0 before meeting Singing Fish SC in the quarter final. Jegameetpar created an upset beating the FA Cup pre-quarter finalists 4-2 on penalties after it too ended 2-2 at full time.

Subaraj gave Iyanar SC an early lead in the first minute itself in the semi-final. But Jegameetpar stuck to the basics and gained reward for their patience in the 15th minute through Suman.

Second half saw another two goals from both the sides. Kanisius scored the second goal for Jegameetpar in the 34th minute. Gogul Das equalized again for Iyanar SC in the 49th minute as the match proceeded to the penalties.

Jegameetpar held their nerve yet again in the penalties pipping out the opposition 5-4 to enter in to the finals.

St. Anthony’s defeated Rudrapuram SC 4-0 and Young Henricans SC, in the quarter final, 4-3 on penalties after the full-time score read 1-1.

Union SC defeated Lucky Star SC 4-2 and Young Kambans 3-0. In the quarter final, they cruised past Vinmeen SC – Palali to register a 3-0 win.

In the semi-final St. Anthony’s started off with two perfect chances in the opening minutes but failed to make it count. Both teams tried hard to find the net in the first half but couldn’t find the back of the net.

The match despite seeing many chances looked as if it will be decided in the penalties. However, Thanujan had other ideas as he slotted the rebound which came his way in the dying minutes to hand Union SC the lead and eventually the win.