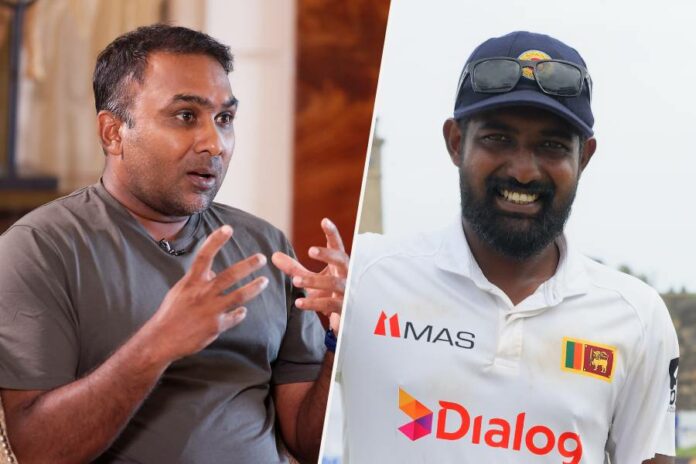 ICC Hall of Famer Mahela Jayawardena was impressed by Prabath Jayasuriya’s exceptional start in Test cricket and discussed the promise he holds for Sri Lanka’s future on ICC Review.

Jayasuriya made an impressive start to his Test career, taking three or more wickets in each innings of his Test career so far, and walked away with the ICC Men’s Player of the Month award for July 2022.

Jayasuriya, who debuted in the Galle Test against Australia last month, returned figures of 12/177, becoming the first spinner after Muttiah Muralitharan and Rangana Herath to take 12 or more wickets in a Test.

The 30-year-old continued his rich vein of form against Pakistan, taking 17 wickets in the series, including two five-wicket hauls.

With 29 wickets in three Tests so far, Jayasuriya has made a roaring start to his career in whites. Where was he all this time, though?

“He has been around for a while. He’s been playing a lot of first-class cricket, had a lot of experience under his belt,” Jayawardena said in the ICC Review.

“He just hasn’t had the opportunity. Obviously, Rangana Herath has been dominating for a decade or so. And after that, Sri Lanka did go in different routes, with a couple of young guys.

“[Lasith] Embuldeniya, on his debut as well did really, really well in that first few series. And Praveen Jayawickrama as well. So, he had to wait for his opportunity. Last few years, he has been really consistent, Prabath, and the selectors have put a lot of faith in him and he has delivered.”

Jayawardena believes that Sri Lanka will benefit from having him around for the next few years, even on away tours. “He can get better because he is a natural bowler, he has played a lot of cricket, understands the game”, Jayawardena said.

“Having seen him closely at SSC, where he plays his domestic cricket, he’s got a very good action, good rotation and he is very accurate, so even away from home, if he can control that length and line, with his height as well he will get bounce.

“So I’m pretty sure that he will do well for Sri Lanka going forward.”

Sri Lanka are at No.3 in the ICC World Test Championship after the Pakistan series, and in with a shot to make the Final next year. As promising as their position is, Jayawardena stressed that Sri Lanka wouldn’t have it easy.

“They (Sri Lanka) have been playing some really, really good cricket. Especially at home, they’ve been very consistent against Australia and Pakistan,” said Jayawardena.

“It is going to be an uphill task (to qualify for the WTC Final) because Sri Lanka don’t have many Test matches leading to the backend of the cycle, but a couple of important series.

“If they can win a few away from home, it will definitely give them an opportunity. Again, at the same time, few of the other results have to go in Sri Lanka’s favour as well.”