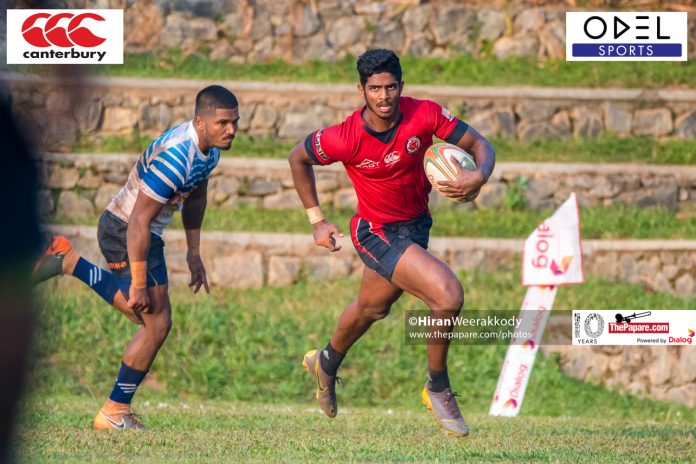 Janidu Dilshan lit up proceedings late in the piece as CR & FC completed their comeback with a 74th minute, trying to seal the game 23-19 and doing the double over Navy Sports Club, to kick off round two of the Dialog Rugby League at Welisara.

Host Navy made just a single change in the forwards as Chamath Madushanka replaced Nirosh Perera. Meanwhile the visitors made two changes with Dilshan Jayah and Harith Bandara coming into the run on XV to replace Risith Kaviyanjana and Rahul De Silva, with Supun Warnakulasooriya moving to the number 8 position from his usual hooker position.

It was all Navy from the onset as the hosts began the game with a sensational solo effort from former Josephian Chathura Senevirathne. The winger sprinted 60 meters, beating the last defender as he was at the end of an offload from his schoolmate Gihan Perera.

Isuru Kongahawatta made no mistake with the conversion as the Sailors took an early 7-point lead in the game. (Navy 07-00 CR)

With Riza Mubarak on the bench, Reeza Rafaideen cut the deficit with a penalty from in front as the Reds finally appeared to find their feet in the game. (Navy 07-03 CR)

Gihan Perera was sent to the bin for a high-shot. However, the visitors failed to apply the brakes on the hosts attack.

The hosts continued on their merry way, dominating CR & FC as the visitors were left in search of answers until Captain Omalka Gunarathne was subbed into play.

The eighth man made an immediate impact and was an instant hit with every carry he made. His injection of strength and vigour helped his side cut the deficit going into the lemons.

Omalka himself powered his way through leaving would-be tacklers in the dust to go over for the Reds first try of the game. Rafaideen failed with the conversion as the first half drew to a close.

Visitor CR & FC began the second half in similar fashion to the first, this time with a penalty off the boot of Murshid Zubair, as the former Wesley captain slotted home as Navy brought down a maul in illegal fashion. (Navy 14-11 CR)

Omalka’s energy got the better of him as he was sent to the bin for a shoulder charge.

Navy made use of the extra man as the home team bullied their way to the try line to extend the lead. Raveen De Silva as fresh legs grabbed the initiative back in favour of the Sailors as he crashed over from close range.

Kongahawatta failed with the extras as the game entered the final 15-minutes. (Navy 19-11 CR)

Nirosh Perera was the second Navy player to sit in the bin, as Gunarathne returned into the fold as Navy were left to play the next 10 minutes with 14 men.

The visitors made use of the advantage, spreading the ball wide off a line out and off 1st phase ball in the corner through Janidu Dilshan. The former Royalist showed his capabilities and why he sits on top of the try scorer list as he beat the final defender in the far corner to score.

Returning Riza Mubarak made no mistake with the extras from under the post as the two teams were separated by a point, going into the final 10-minutes of the game. (Navy 19-18 CR)

This moment of brilliance spurred on the visitors as they smelt blood in the dying embers of the game. The lads from Longdon Place played like possessed men and the Navy were blown off their feet in the final few minutes.

Scorer Dilshan sparked yet another smooth move for CR, offloading to set up Wajid Fawmy as the flanker dived over in the corner to hand the Reds the lead for the first time in the game, even though Mubarak failed to add the extras. (Navy 19-23 CR)

The home team fought hard in the final 6 minutes after conceding the lead; however, the Sailors failed to breach the CR defensive line. The game ended with a losing bonus point, handing CR the win – a winning start to the second round and the double over Navy in the Dialog Rugby League Season.