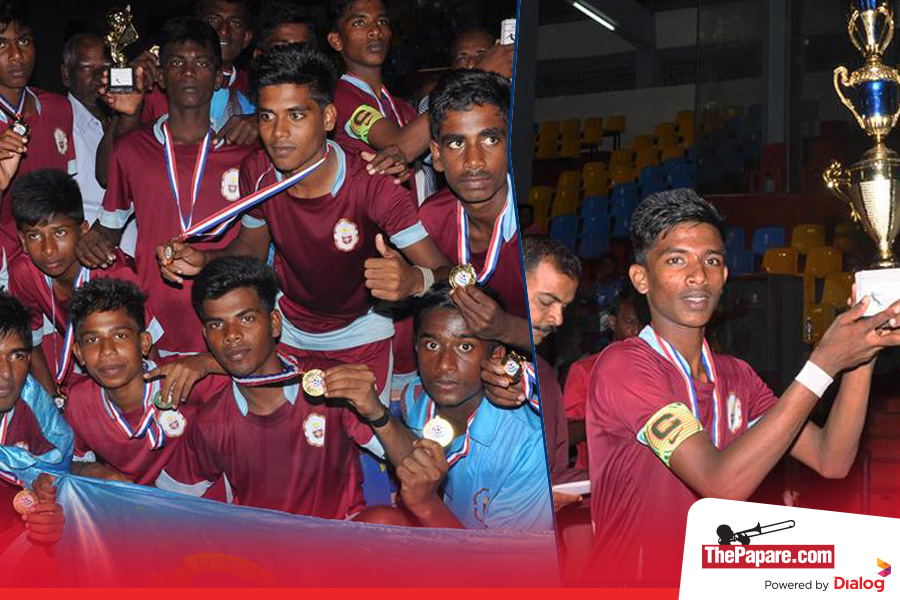 Despite missing their star players Jude Suman and Anojan, St. Henry’s started as favourites. After dominating the early exchange, St. Henry’s missed a golden opportunity to go 1-0 up in the third minute.

Despite continuing their dominance, the weak finish deprived them from grabbing an equalizer.

St. Henry’s Madhushtan leveled things up in the 16th minute to give St. Henry’s a chance to come back into the game.

Jaffna Central managed to go up for the second time in the game when Remsan scored a goal out of nowhere to hand the lead back to the Jaffna Central lads.

The match started to heat up as both teams displayed a brilliant show of end to end football. St. Henry’s managed to get the better chances but was kept waiting by Jaffna Central’s goalkeeper who made some eye popping saves.

St. Henry’s were expected to run away with the game in the second half but Jaffna Central showed great composure and resistance to stay in the game with some organized defending.

All efforts for an equalizer from St. Henry’s College were stopped smartly.

Match gained fierceness as some rash tackles took over the stay disrupting the flow of the game. Referee had to take out the yellow card more than once to keep things under control.

Antony Raj of St. Henry’s missed some header opportunities as time started to tick away.

In the 84th minute, Belin scored a counter attacking goal for Jaffna Central to put the match to bed.

In the end,  the match ended  as Jaffna Central College completed a memorable victory against St. Henry’s College.

St. Patrick’s routed Mahajana College in the third place playoff to win the bronze with the score line of 9-1.

Subash opened the scoring by successfully converting a penalty into a goal. Shanthan continued it with a header in the twentieth minute to double the lead.

Three more goals followed in the 29th, 32nd and 56th minutes to make it five goals before the hour mark, one from Shanthan and two from Gaings.

Mahajana somehow managed to pull things back with a counter attacking goal in the 60th minute through Mathan Raj.

Gaings completed his hat-trick in the 65th minute.

St. Patrick’s continued on their merry way as Shanthan scored another goal for the Patricks boys to complete his hat-trick.

Two late goals in the 84thand 86th minute meant that St. Patrick’s completed a 9-1 victory and claimed the bronze in style.

Mahajana College Girls team emerged winners against Pandatharippu Girls College 1-0 in a friendly exhibition with Sanaa scoring the only goal of the match.