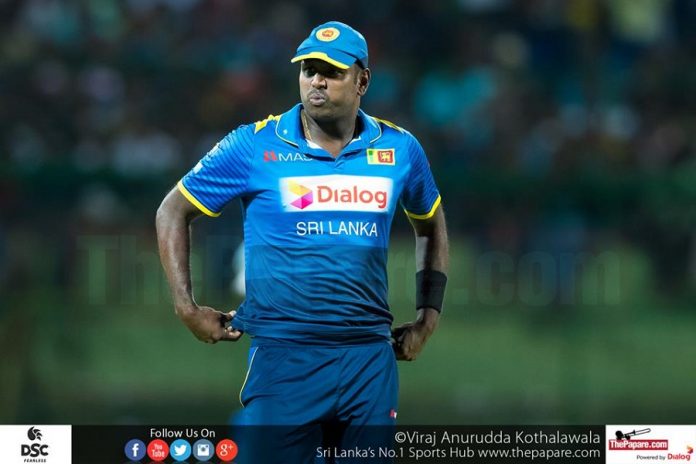 Soon after Sri Lanka were ousted from the tournament – following defeats against Bangladesh and Afghanistan, Mathews was sacked as captain and Test skipper Dinesh Chandimal was handed the responsibility of leading the charge with only a limited number of games to go before the 2019 World Cup.

The national selectors have appointed Dinesh Chandimal as the Captain of the Sri Lanka ODI cricket team, replacing Angelo…….

After a meeting with the national selectors and head coach last Friday, Mathews wrote to the SLC CEO Ashley de Silva stating that he alone cannot be held responsible for Sri Lanka’s poor performance. “Though I was initially surprised, it was immediately felt that I have been made the scapegoat in this entire saga of Sri Lanka’s dismal performances against Bangladesh and Afghanistan in the Asia Cup, I’m willing to take part of the blame but at the same time, feel betrayed and let down if the blame is solely put on me. As you know all decisions are taken through a mutual understanding with the Selectors and the Head Coach. And though I do not agree with the reasoning that the losses should be accrued single handed to the captaincy, I however eagerly and wholeheartedly respect the request of the selection committee and the head coach in asking me to step down and do so with immediate effect.” Mathews wrote in his resignation letter obtained by ThePapare.com.

Sri Lanka crashed out of the 2018 Asia Cup after being handed a thrashing by Afghanistan, to whom they lost for……

He further added that he had given up captaincy with a view of letting a younger player grow in that role, but returned to the role in the larger interest of the side on being persuaded by the head coach. “You would recall that I relinquished my captaincy in all formats in July 2017, pursuant to captaining Sri Lanka continuously for a period of 5 years in all formats. During this tenure, under my captaincy, series wins were recorded against England, we whitewashed Australia 3-0 and winning the Asia Cup in 2014 were some memorable occasions. However in the team’s best interest having felt that the time had come for new leadership I voluntarily resigned as Captain from all formats of the game in July 2017. Thereafter, pursuant to Sri Lanka suffering heavy defeats in all formats and having several appointed Captains, namely Upul Tharanga, Thisara Perera, Chamara Kapugedara, Lasith Malinga and Dinesh Chandimal during the tenure between July 2017 and December 2017 in the ODI and T20 formats, Mr Chandika Hathurusinghe immediately having been appointed as Head coach met with me in person, requested me to reconsider taking up the Captaincy until the World Cup in 2019. Though myself, my family and close friends discouraged me in taking up the mantle, being confident in Hathurusinghe and his plans to elevate the performances of the Sri Lankan team and in the best interest of my country I agreed to do so until the World Cup.”

Despite expressing his dejection, Mathews added that he would continue to play for Sri Lanka for as long as the selectors feel he is worthy. “I also believe that if the selectors and coach are of the view that I am unfit to play ODI and T20 cricket and thus not entitled for my place in the team, I would also consider retiring from the ODI and T20 formats as I never want to be a burden to the team,” he wrote.