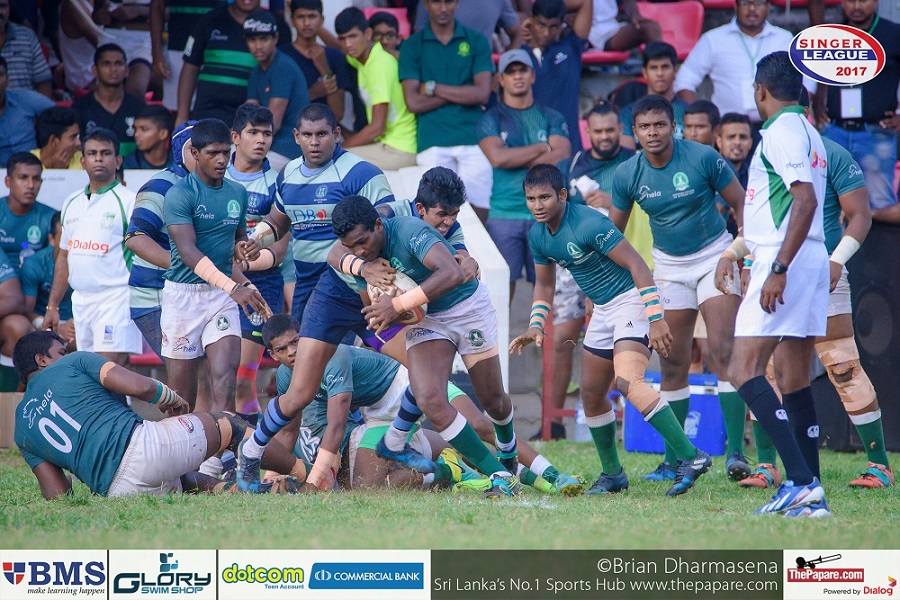 A week after their loss against Trinity College, Isipathana College came up with a solid defensive performance to end their season on a winning note defeating Wesley College 28 points to nil in their final league game worked off at Havelock Park. Isipathana collected their points from 5 tries and a penalty that also got them a valuable bonus point and help them finish the league as runners up for 2017.

Referee Irshad Cader got things underway and initially it was Wesley College who dominated possession but just could not find a loophole in the opposition defence. Isipathana had only a handful of moments where they had possession and even then could not make any headway due to some stout defending by the visitors as well. Wesley’s scrum half Avishka Lee had the opportunity of breaking the deadlock in the 20thminute but his 35 meter penalty attempt was off target. Isipathana’s leading try scorer, who did not make the starting line-up due to illness, was introduced in the 30th minute and five minutes later got the scoreboard ticking putting over a straight forward penalty. (IC 03 – WC 00)

Wesley who dominated major parts of the 2nd half knew they had to be sharper to convert that pressure into points but Chamodh Fernando had other ideas. The Isipathana forwards and their deadly backs worked in tandem and after a few sweeping phases from left to right Chamodh Fernando cut through the Wesley defence to score in as early as the 42nd minute. Center Manlika Rubeyru who took over the kicking duties failed miserably but his team was in the lead by 13 points. (IC 13 – WC 00)

Avishka Lee opted to have a go at the uprights with a difficult 40 meter penalty kick but just as his first attempt it was never on target. Isipathana went on to extend their lead by another five points in through another Chamodh Fernando try. Scrum half Harith Bandara set his backs in motion off a five meter scrum and Chamodh Fernando had too much quality cutting inside and touching down for the 2nd time in the game. (IC 18 – WC 00)

Things only got worse for the visitors as they conceded another try five minutes later. Winger Nadeesh Chamdinda was quick to react during a breakdown scooping up the ball from a ruck and scrambling to the try line. Chamodh Fernando who took up the kicking duties once again however could not improve Isipathana’s luck with the boot. (IC 23 – WC 00)

Isipathana were reduced to 14 men when prop Vikash Wimadawa was sent to the sinbin for repeated infringements at the breakdown but despite the numerical disadvantage it was the “Green Machine” that scored yet again through 2nd rower Sudeera Gayanath who dived over for a corner flag try. The try proved to be the final nail in the Wesley coffin as the “double blues” gave up the fight during the last moments of the game as Pathana controlled the game during the last ten minutes to walk out easy victors in the end.