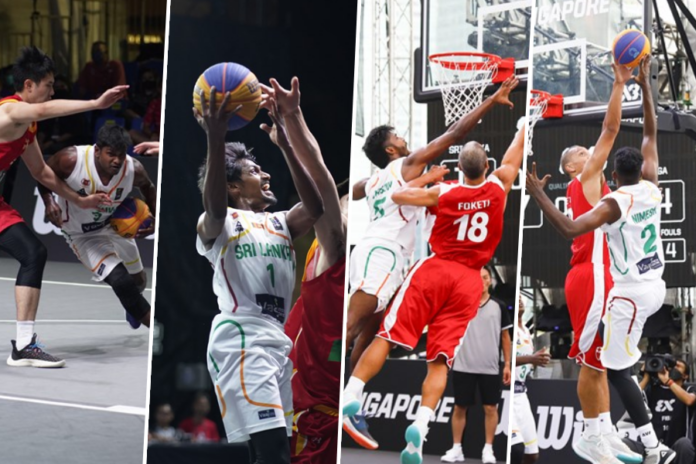 The Sri Lanka Men’s 3×3 team recently took part in two international competitions, with disappointing returns. Here is a look at their numbers and what went wrong for them.

It was a tough draw for the Lankans in the World Cup qualifiers. Their matches were against Malaysia and Iran, and the final scores read 21-17, 21-10 respectively, all in favor of the opposition.

The World Cup qualifier was a winless outing for the Islanders, as they were knocked out after the first two matches they played, with two defeats under their belts. However, Gamage and Athapaththu fought bravely on the court from the first minute itself, with dashing 2s and high-quality jumpers. Gamage was particularly explosive on the court, while Athapaththu played his usual game with his intense defense, smothering the opposition.

Unfortunately, the support they received from the two Fernandos, Chanuka and Nimesh was just not satisfactory. The pair are definitely talented and amongst the best 3×3 players in the country, but did not bring their A game to the qualifiers and therefore could not really make a mark.

Sri Lanka took a tight victory against Tonga, 21-19, but were blown away by China 21-08 and thereby did not have enough to move through to the next round. A disappointing result, all things considered.

Individual Scores as the players’ ranking

In truth, Sri Lanka were more or less a one man show in Singapore as they took on Asia’s top teams. Once again Gamage was the star of the show for Sri Lanka, playing some explosive, aggressive and eye-catching Basketball. Dasun Nilantha was also decent in the game against Tonga.

However, the performance against China was a massive disappointment. A double-digit defeat [ 21-8] for Sri Lanka, even against a powerhouse like China, is not what they would have wanted going into that game, especially after their performance against Tonga.

Sri Lanka has faced many tougher teams, and with the experience on the side, they would have expected a narrower margin of defeat to at least get their score into double figures. The side is in desperate need of someone who can make buckets for them consistently. A strong offensive player would definitely give Sri Lanka the opportunity to compete at a highest level with teams like China, who are big.

Over the past few years, Sri Lanka Basketball has turned their attention towards 3×3 Basketball. In a bid to grow the zippier format of Basketball in the country, the Sri Lanka Basketball Federation took the initiative in organizing Open Pick-Up games, a tourney which helped players participate in competitive 3×3 games and also advance their skills and rankings.

Sri Lanka did get into two major competitions this year, but if they are to improve, they are going to need a lot more competitive games at the highest level. Not only does this help players develop their skill set, it also helps teams gel and get into the groove of playing together, instead of coming together just before an important competition like the above two.

What’s the next international assignment for the Lankans?

3×3 Basketball will be making its first appearance at the Commonwealth Games in Birmingham, and team Sri Lanka will be there to soak it all up.

The basic concept of having tournaments like the Asia Cup is for the teams to gain some experience in the international arena before they go into global competitions like the World Cup and the Commonwealth Games. So, as you would imagine, most teams feature their strongest sides at these major competitions. However, Sri Lanka have decided to go in a different direction.

Sri Lanka’ Commonwealth Games squad led by Rukshan Athapaththu, features Janith Gamage, Simron Yoganathan, Arnold Brent, Shehan Fernando, Chenura De Alwis, Aaron Keegan and Abdul Rahman, with the decision by SLBF to go with an Under 23 side for the competition.

This is an interesting choice, as not only are they not featuring their most experienced side, they are also opting for new combos in the side who have not really played much together at the highest level.

Athapaththu is an elite performer who does his job in both defense and offense, and did so in the last encounter [World Cup Qualifiers] as well, while Brent is a youngster who has led the country – they are the only two with international experience at this level.

An Under 23 team representing Sri Lanka in an Open tournament at CWG will probably nip any hopes of medaling at the event, in the bud – one could argue that with a medal out of their grasp anyway, sending a young side could benefit the players who are sure to gain important experience at the games. This is one positive way to look at what is to come for the side, who will no doubt be determined to give it their all in Birmingham as well.

Stay tuned for the women’s evaluation.