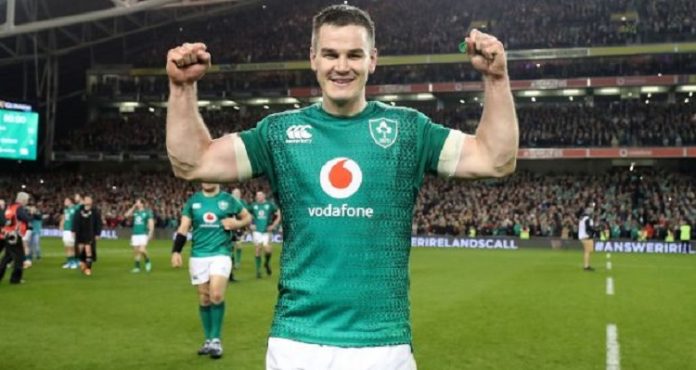 Ireland have capped off a successful year by sweeping the board at the World Rugby awards in Monaco.

The world number two side won 11 of their 12 tests in 2018, including winning the Grand Slam by going undefeated in the Six Nations and beating the All Blacks for the first time on home soil.

Coach Joe Schmidt, who is set to confirm on Tuesday he’ll step down after the World Cup, won Coach of the Year while the World Rugby Team of the Year also went to Ireland.

They capped off the night with first-five Johnny Sexton beating out All Blacks duo Beauden and Rieko Ioane, along with South African pair Faf de Klerk, and Malcolm Marx for the award.

Sexton is the first Irishman since Keith Wood in 2001, and the first northern hemisphere player since France’s Thierry Dusautoir in 2011to win the award.

As Sexton has lost his voice due to a throat infection, captain Rory Best read a speech on behalf of the first five.

“It’s been an incredible year for Irish rugby, to win everything we could, really.

“It’s been very special, and a few of us have ended up here tonight. There are areas we’ve definitely highlighted to improve, which will be important in World Cup year.

“Teams try to peak for World Cup years. People ask have we peaked too soon? Well, we haven’t peaked, so we’re just getting better and hopefully, we can continue to do that.

“You have to improve ahead of the general curve. We know everyone else is going to get better.

“We’ll be going into a lot of games now as favourites after what’s happened this year, so that will be a challenge for us.

“We’ve got to deal with being favourites, and I’m sure we can do that.

“If a number 10 wins an award like this it is due to the team around him.

“We have some of the best coaches in the world and are led superbly.”

Brodie Retallick was the only All Black to win an award after claiming the Try of the Year award for his beauty in the opening Bledisloe Cup test in Sydney.

“Its been an incredible year and I want to say a massive congrats to all nominees … I want to say congrats to Sarah Goss who I’ve looked up to for many years, she is a player I strive to be like so this is for you sis,” Blyde said after receiving the trophy.

Jamie Armstrong of charity The Clan was handed the Spirit of Rugby Award, while Stephen Moore and DJ Forbes both picked up the International Rugby Players (IRP) Special Merit Award.

Meanwhile, former Scotland lock Doddie Weir won the Award for Character in rugby. The 48-year has been raising money for motor neurone disease after he was diagnosed with the deadly disease nearly two years ago.

Samuel Maduwantha – Nothing has CHANGED!