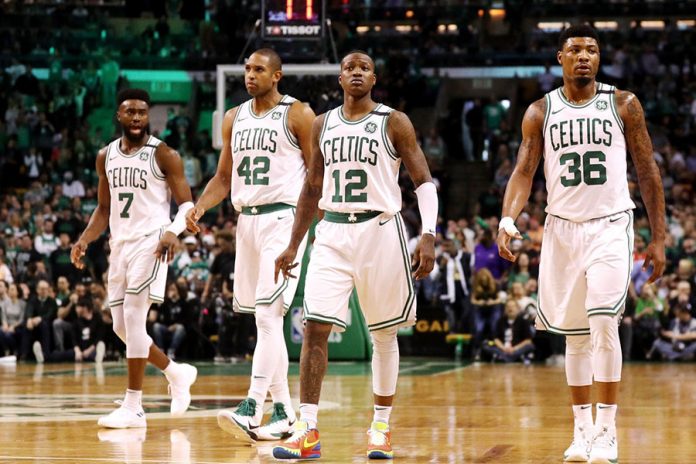 For several franchises in the league this year, progressing through the season wasn’t simple and it was the same for the Boston Celtics. Despite losing Gordon Hayward at the beginning of the season and Kyrie Irving before the playoffs, Celtics have surprised the NBA fandom as they seemed undermanned since last October. To be precise, it’s not a matter of being undermanned but a matter of stepping up along with the ‘next man up’ attitude. The impressive accomplishment was that the young ballers lived up to expectations.

Can we stop calling the Celtics undermanned? Clearly – they’re manned: their starting lineup is largely elite-level draft picks who’ve gotten some hard-fought seasoning in these playoffs. Why we should look at this team through the lens of who they are, not who they’ve lost. pic.twitter.com/lNpWgVmgNi

To put the Celtics in the position that they are now which is to be competing for the conference finals, immense contributions that came in the form of a rookie and a sophomore named Jayson Tatum and Jaylen Brown respectively were needed. The expectation from them was to fill the shoes of two All Star caliber players throughout the regular season as well as in the playoffs which is a herculean task but it’s safe to say that Tatum and Brown have done a satisfactory job.

Can the Celtics take down the Sixers in this series? ?☘️ #NBA #NBAPlayoffs #Celtics #Sixers #KyrieIrving

Before the game 1 in the Eastern Conference finals, Coach Stevens made a statement to the team that encapsulates the driving force behind the eye-popping season the Boston ballers have had.

“Don’t let your youth be an excuse”

Most players in the Celtics squad are in their early 20s and Al Horford being the oldest is 32. As far as maturity and experience is concerned, Celtics still have a long way to go. Nevertheless, the determination to prove the world wrong as they count them out is still keeping the team going.

That young Celtics team ain’t nothin to mess with ?

The Cleveland Cavaliers understand what the Celtics are capable of and it’s not hyperbolic to mention that the Celtics have a legitimate chance of overpowering the defending Eastern Conference champions.

Here’s what the Celtics have been exceptionally good at so far during the season as well as the playoffs.

You can never survive this far in the league with no offense and there’s no denial in the fact that the C’s have a healthy offensive unit. But, what separates them from the rest and elevates them to the level that they are now is their energetic defense.

Throughout the regular season, the Celtics exercised their dominance at the defensive end and topped the defensive ratings list and so far in the playoffs they have managed to secure the fourth spot in the same category. To be able to deny the Cavs their fourth consecutive trip to finals, C’s will have to continue what they have been doing all season long.

It’s only logical to choose great offense over defense but Cleveland Cavaliers are currently having alarming shooting woes which subsides the offensive threat that they have the potential to be. Hence the upper hand of the matchup is undoubtedly up for grabs and Celtics enjoyed the perk and it was emblazoned on the final score of game 1 as it read 108-83.

How the Celtics defense effortlessly paved the path for a 25-point differential in game 1 was mainly through clogging the paint which takes out one of the primary offensive threats in Cavs offense.

LeBron James shot 75.9% from the restricted area so far during the playoffs and surprisingly he wasn’t the top in the category in the Cavs squad. Larry Nance Jr. maintained a whopping 88.9% under the basket while Ante Zizic showed his capability with a 82.2% during the regular season.

When the game 1 statistics are considered, out of the 86 shot attempts the Cavs made, only 9 were taken in the paint (restricted area excluded).

Nullifying the opportunities to execute in the paint will have to continue if the Celtics are to win this series.

Not only the paint, the perimeter defense made a drastic change as Cavs shot a meager 15.4% out of 26 shot attempts from the 3 point territory. Credits for the aforementioned attainment goes to the gifted lengthy reach and the unique athleticism that the Celtics possess. Almost all the 3 point attempts were contested as J.R Smith, Jeff Green, Cedi Osman, Jose Calderon, LeBron James and Rodney Hood couldn’t net a single 3 out of 13 combined attempts. The veteran 3 point machine, Kyle Korver only managed to splash one 3 pointer out of 5 attempts. Any one who has seen Korver on the floor knows how much he runs through screens to take a good look at the hoop and even his quick trigger wasn’t given any space by the Cs.

If the hustling defense from the Bean City ballers continue, Coach Ty Lue will have a tough time producing offense for Cavs.

A lot has changed for the #celtics from last year’s Eastern Conference Final against the #Cavs.

Danny Ainge rebuilt the roster to be longer and more athletic.

Surviving only on offense against Cavs will never be an option. The coexistence of proper defense was depicted in the Cavs Vs Pacers first round series as the inexperienced Pacers managed to stretch the series to 7 games while many underestimated them. Boston Celtics have the resources to do the same so it’s bound to be an exciting series.

Despite losing game 1, LeBron James had zero concerns on the outcome and if history is any indication, counting out James is never a wise move. When Coach Stevens was asked if he anticipates LeBron James to bounce back, he mentioned “You could go through the careers of every great player ever. They always respond”. So, within the upcoming week we’ll be able to witness unparalleled hooping skills and also who earns the honors to battle the champion from the West at NBA finals.

So that’s a wrap for this week on NBA playoffs via ThePapare.com and until next week, keep balling!