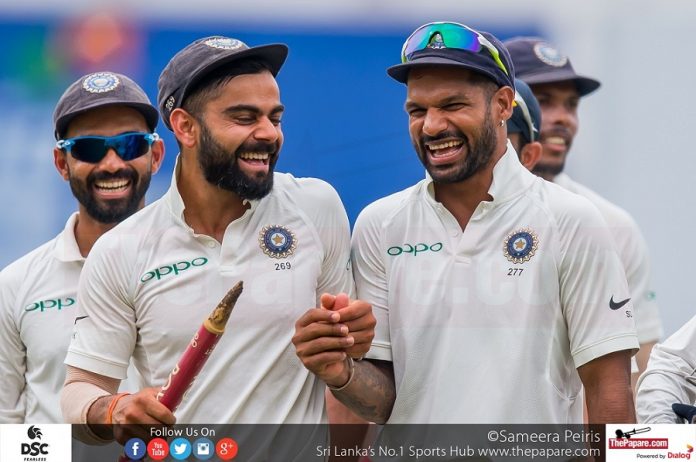 Murali Vijay makes a comeback to the India Test squad at the expense of Abhinav Mukund, while the MSK Prasad-led selection panel on Monday (October 23) also included Ishant Sharma in the 16-member squad for the first two Tests of the three-match series against Sri Lanka.

Vijay, who was originally part of the squad for the Sri Lanka tour, was ruled out ahead of the series due to a wrist injury and was replaced by Shikhar Dhawan. He had played with a fractured wrist during the Australia Test series earlier this year and subsequently travelled to the UK for surgery which forced him to miss the tenth edition of the IPL. He later complained of pain in his right wrist during a preparatory match and had to undergo further rehabilitation, which resulted in an extended break from international cricket

Vijay recently had to retired hurt after twisting his ankle during the second innings of Tamil Nadu’s Ranji Trophy opener against Andhra and the right-handed opener had to miss the next game against Tripura. With the Test series against Sri Lanka scheduled to get underway from November 16, more than three weeks from today, Vijay has adequate time to get match fit.

Mukund, who was part of the India squad as a replacement for Vijay during the Australia series as well as the Sri Lanka tour, last featured in the Galle Test in which he scored 81 in the second innings. However, he had to make way for KL Rahul for the next two Tests, with the Indian team management preferring the pair of Rahul and Dhawan to handle the opening duties. The left-hander recently scored two half-centuries in three Ranji innings but the selectors have overlooked him in favour of his Tamil Nadu team-mate.

Ravindra Jadeja and R Ashwin, who have missed the string of limited-overs assignments over the past few months, return to the Test squad which also has Kuldeep Yadav as the third spinner. The selectors, meanwhile, have left out Axar Patel, who was flown in as a replacement for Ravindra Jadeja for the final Test in Pallekele.

The Board of Control for Cricket in India (BCCI) has announced the schedule….

Umesh Yadav and Mohammed Shami, who have also received limited opportunities of late, will spearhead the pace attack which also has Bhuvneshwar Kumar and Hardik Pandya as the other options along with Ishant. The Delhi pacer last featured in the third Test against Australia in Ranchi in March 2017 and wasn’t part of the touring party for the Sri Lanka Tests.

Rohit Sharma, India’s limited-overs vice captain, retains his place in the Test squad despite not being part of the playing eleven for any of the Tests during the Sri Lanka tour.