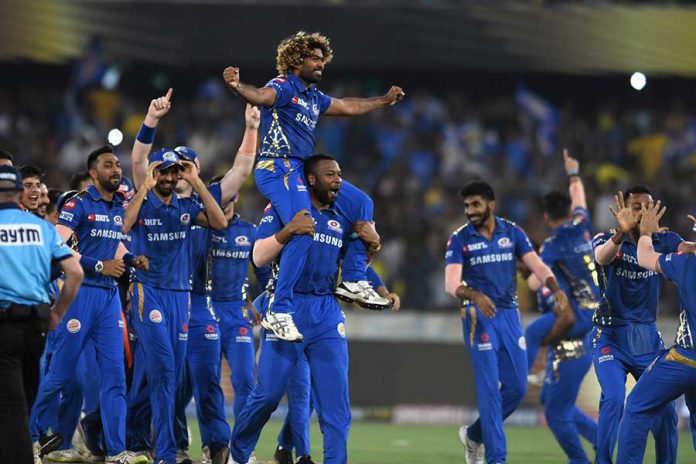 Lasith Malinga bowled a dream final over, defending nine runs, including getting Shardul Thakur out LBW when two were needed off the last ball, to help Mumbai Indians defeat Chennai Super Kings by a solitary run and claim their fourth IPL title.

It was a match deserving of a final, with fortunes swinging wildly between two teams who know how to get to finals and how to win them, too. Batting first, Mumbai Indians were buoyed by a late flourish from Kieron Pollard and managed 149 on the board. In reply, CSK looked to be in control, with Watson, riding a wave of good fortune, taking his side close. However, Malinga turned up to bowl a stunning last over and leave Mumbai Indians exalted.

From zero to hero

Malinga had profusely leaked runs and boundaries off the 16th over – his third. Giving away 20 runs, Malinga’s profligacy had helped CSK overcome the shock dismissal of MS Dhoni cheaply earlier in the innings.

Coming into the final over, CSK looked favourites. They needed just 9 runs and had Shane Watson and Ravindra Jadeja at the crease.

Malinga channeled his older, younger self, when he was almost impossible to put away, as he bowled his final over. Ball one was a near-perfect yorker which was squeezed away for one. Ball two bore the same result too. The third ball was another yorker, which resulted in a couple, while the fourth ball resulted in the run-out of Shane Watson for 80 off 59 balls.

Two runs off the penultimate delivery left CSK needing two off the final delivery. But Malinga had one last trick up his sleeve. A slower full delivery completely deceived Shardul Thakur, and had the batsman plumb in front. Malinga was villain not too long ago, now he was propped up on the shoulders of Kieron Pollard as a champion.

Another hero for Mumbai was Jasprit Bumrah, who further underlined his status as one of the best current bowlers, with a brilliant display. Bumrah gave away just 14 runs in his four overs for two wickets, but his biggest impact was the last two overs of the match in which he gave away just nine runs to keep Mumbai in the game.

Match on the line. Tournament on the line. 2 runs off 1 ball. One of the greatest T20 bowlers… sends in a slower ball. Work of art. Put it in one museum.

It went on for an eternity, just as if the heavens had decided that a moment of such importance needed that much drama. MS Dhoni had decided to run off an overthrow that had gone straight to the long off fielder – Ishan Kishan. He wasted a couple of seconds trying to gesture to Shane Watson to rush to the other end. That mini-second cost him. Just as Dhoni was about to make his crease at the other end, Kishan hit the stumps direct. There were no big celebrations from Mumbai Indians. They were unsure. But the replays showed it was a mighty close affair. One angle showed Dhoni just about in. Another showed that he was just about out. Third umpire Nigel Llong took an eternity to make up his mind, and finally the screen flashed red. CSK had been dealt their biggest blow. MI had risen from the dead and were favourites now. CSK were by no means out, they needed 68 off 42, but with the finisher back in the hut.

Chasing a tricky 150 to win, CSK looked to have made a great start when Faf du Plessis got into his groove early. He was 12 off 7 when he faced Krunal Pandya’s second over. He went after the left-armer, hitting him for two fours and a six. He fell soon after, trying to give Krunal the charge and being out stumped in the process. But Watson took over. In the final over of the powerplay, he went after Malinga. Two fours and a six later, CSK had finished with 53 in their powerplay.

Watson knows how to win finals. His blistering hundred against SRH last year had delivered CK a fairy-tale triumph. He had a chance again this time. With du Plessis Dhoni, Raina and Rayudu all failing, Watson was once again was looked at as the guy who could get CSK home.

But unlike last time, this time he was helped by some horrid fielding. Malinga was the first culprit. After Mitchell McCleneghan had induced a miscue from Watson, the Sri Lankan pacer put down a straight forward chance with Watson on 31. Rahul Chahar was next, putting down a tough return chance when Watson was on 42. The third drop was again from Chahar, who put down a dolly after Jasprit Bumrah had Watson mistiming a pull when on 55.

Watson led a charmed life, capitalising on his drops by going after Malinga and smashing him for three fours in the 16th over, lofting Krunal for three back-to-back sixes in the 18th. That left them needing 19 runs in 14 balls, and with a well set Watson at the crease, it looked to be in CSK’s bag. But as it turned out, Malinga trumped Watson in the battle of veterans.

Malinga speeds (in KPH) in that final IPL over:

The courage to deliver that slower ball with a tournament on the line. Incredible.

CSK claw back after MI tee off early

Quinton de Kock signalled his intentions early in the game. Mumbai Indians had won the toss and elected to bat on what seemed a good batting pitch and knew they had to pitch in in the powerplay. De Kock gave them a quick start by smashing three sixes in the third over, off Deepak Chahar. He added one more off Shardul Thakur soon after as Mumbai Indians looked set to cash in big in the first six overs.

That’s around when Dhoni’s tactical nous came into play. He had asked Thakur to switch ends after the first over, and the right-armer repaid the faith by getting rid of de Kock in that over. After de Kock fell, Dhoni immediately brought back Deepak Chahar into the attack and saw him send back Rohit Sharma with an away swinger. CSK applied the breaks superbly thereafter. Mumbai Indians had raced to 37/0 in the first four overs, but could only muster 16/2 in the next four as Dhoni and Co. assumed control.

Mumbai Indians had lost their momentum after a fast start and much revolved around how Hardik Pandya and Kieron Pollard do in the death overs. Hardik Pandya was mostly greeted with short of length deliveries aimed at the body, while for Pollard, Dhoni had a man stationed at very straight long on and another one wide. For Pollard, not the kind of batsman to play the scoop or the glide, it was a well laid out move. Pollard’s hard hits down the ground found the fielder often, ensuring Mumbai Indians did not gallop towards a big score.

The West Indian, however, did get his own back. He smashed Thakur and Tahir for sixes before finishing with back-to-back fours in the innings to give Bumrah, Malinga and Co something to bowl at. Pollard finished with 41 off 25 balls, giving MI a late boost as they ended with 149.