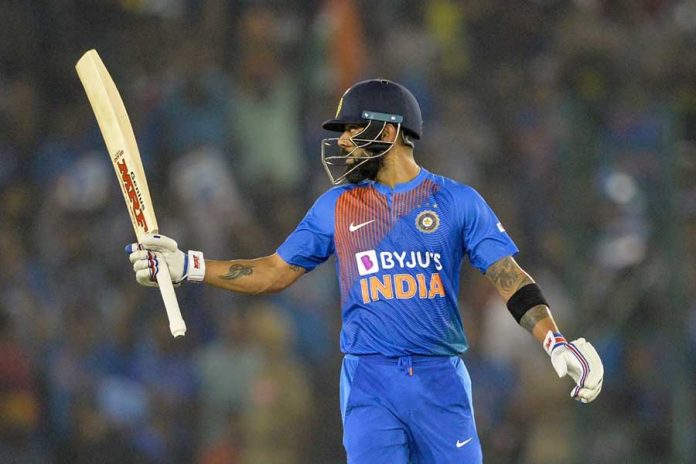 A Virat Kohli masterclass ensured India cruised to victory over South Africa, taking a 1-0 lead in the T20I series in the process.

He finished 72 not out, and in the course of his innings overtook compatriot Rohit Sharma as the leading run-scorer in T20Is. His 22 fifty-plus scores in the format is also a record.

Rohit himself made just 12 before being pinned lbw by Andile Phehlukwayo in the fourth over, but Kohli received strong support from Shikhar Dhawan, who made 40 as the pair added 61. Both Dhawan and Rishabh Pant fell in the space of three overs and 10 runs to give South Africa a glimmer, but the game always hinged on Kohli, and he once again showed off his chasing prowess, taking his team home with an over and seven wickets to spare.

He took his average in T20Is above 50 once more, making him the only player to average 50 in all three international formats. His average when chasing sits at a stratospheric 81.

Kohli honoured with a stand in his name at Delhi stadium

While there is little accounting for Kohli’s magic, the Proteas might have felt they could have stretched out slightly further when batting. After losing Reeza Hendricks for single figures, Quinton de Kock, playing his first game as captain, added 57 in partnership with Temba Bavuma to establish a strong position, sitting on 87/1 after 11 overs. However, the last nine overs brought just 62 runs as India restricted their opponents well.

Deepak Chahar claimed the pick of the figures, with the scalps of Bavuma and Hendricks making up his 2/22, but India’s was a combined effort – only Navdeep Saini went at over eight runs an over.

Still, if the bowling was about the collective, the batting was about one individual, and the individual whom it is so often about. India lead 1-0 in the series with one game to play and if South Africa are to level the series, they will have to find a way past perhaps the greatest limited-overs batsman of them all.

Gunaratne set to feature for Sri Lanka ‘A’ against Bangladesh ‘A’