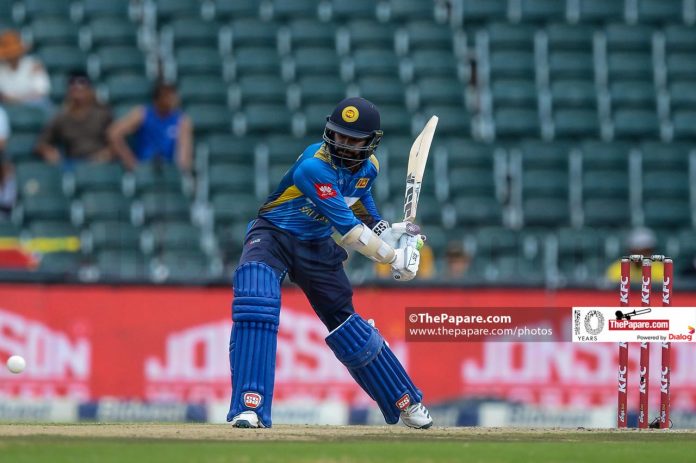 Sri Lanka A registered a comprehensive 7-wicket victory over the hosts India A in the fifth and final unofficial ODI between the two sides which concluded today at Hubli Cricket Stadium in India. The left-handed Niroshan Dickwella’s magnificent century with the bat helped the visitors square the 5-match unofficial ODI series 2-2.

Sri Lanka A skipper Ashan Priyanjan won the toss and invited the hosts to take the first lease of the wicket. Ruturaj Gaikwad and Prashant Chopra opened the innings for India A but added only 25 runs for the 2st wicket as the latter was dismissed by the in-form pace bowler Chamika Karunarathne in the 5th over.

Gaikwad built two 50 plus partnerships with Anmolpreet Singh and Ricky Bhui for the 2nd and 3rd wickets respectively and top scored for the hosts with a knock of 74 runs off 73 balls. His innings included 8 fours and came at a strike rate of 101.37.

Ricky Bhui (38) and Deepak Hooda (37) chipped in with useful contributions with the bat as India A was bowled out for 259 runs in the allotted 50 overs. Off spinner Akila Dananjaya picked up 3 wickets for 51 runs while the skipper Ashan Priyanjan grabbed 2 scalps for 23 runs for the visitors.

After being 165 for no wicket, the visitors lost 3 quick wickets for just 20 runs but the in-form batsman Shehan Jayasuriya and skipper Ashan Priyanjan guided them to the victory without any further hiccups. They built an unbeaten 75-run partnership for the 4th wicket as Jayasuriya made 45 runs off 55 balls with a four and a six while Priyanjan made 33 runs off 51 balls including 3 fours.

The leg spinner Shreyas Gopal was the pick of the bowlers for India A as he picked up all three wickets to fall in the Sri Lankan innings.

Stay logged onto ThePapare.com to get the latest updates, scores, reports and photos on all school, domestic and international cricket.