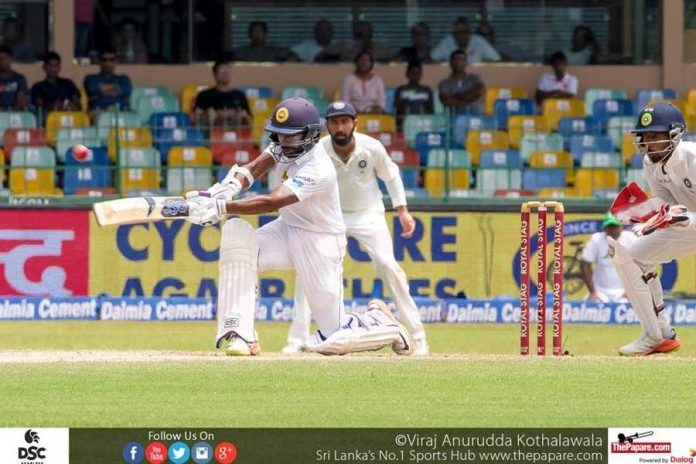 India A registered a comprehensive innings victory over touring Sri Lanka A in the 1st test match between the two sides which concluded today at Belgaum Cricket Stadium in India. Left handed batsman Niroshan Dickwella’s magnificent century with the bat and leg spinner Rahul Chahar’s match bag of 8 wickets with the ball were the key highlights of the day.

Sri Lanka A was 83 runs for 4 wickets in 28 overs at the close of play on day two. The overnight batsmen Ashan Priyanjan and Niroshan Dickwella resumed the innings for day three and added another 78 runs before the former was dismissed for 49 runs as the 5th wicket.

Sri Lanka ‘A’ batsmen stutter after India ‘A’ made 622

Priyanjan’s knock came off 87 balls at a strike rate of 56.32 with 8 fours and 1 six. The all-rounder Chamika Karunarathne was trapped in front by leg spinner Rahul Chahar for just 1 run. Sri Lanka continued to lose wickets at regular intervals and eventually was bowled out for 232 runs in 63.4 overs.

National cap, Dickwella fought alone at one end and managed to stroke a magnificent century. His knock of 103 runs off 113 balls came at an impressive strike rate of 91.15 including 15 fours. Leg spinner Rahul Chahar was the pick of the bowlers for India A team as he grabbed 4 scalps for 78 runs in 17.4 overs.

After been asked to follow on, Sri Lanka A did not get a good start again in the second innings as they lost 3 wickets for just 4 runs in 4.1 overs. The skipper Ashan Priyanjan again tried to rescue the Sri Lankan innings this time with Sadeera Samarawickrama building a 88-run partnership for the 4th wicket.

Mahela says ‘no’ to SLC

Samarawickrama made 48 runs off 92 balls including 6 fours while the skipper Priyanjan stroked 39 runs off 69 balls with 7 fours. After their dismissals, Sri Lankans could not build any significant partnerships in the middle as they were bundled out for 185 runs in 52.3 overs.

Niroshan Dickwella, the centurion in the first innings made 27 runs off 39 balls at a strike rate of 69.23 with 4 fours while the all-rounder Chamika Karunarathne made 20 runs off 20 balls with 3 fours. Leg spinner Rahul Chahar who starred with the ball in the first innings, picked up another 4-wicket haul in the second innings for 45 runs in 13.3 overs.

In addition right arm seamers Sandeep Warrier, Ankit Rajpoot and off spinner Jayant Yadav picked up 2 wickets each for India A team.

With this win, India A leads the 2 match test series 1-0 and will play the second match against Sri Lanka A on May 31 at Hubli Cricket Stadium. Stay logged onto ThePapare.com to get the latest updates, scores, reports and photos on all the matches of Sri Lanka A tour of India.

India A Team won by an innings and 205 runs