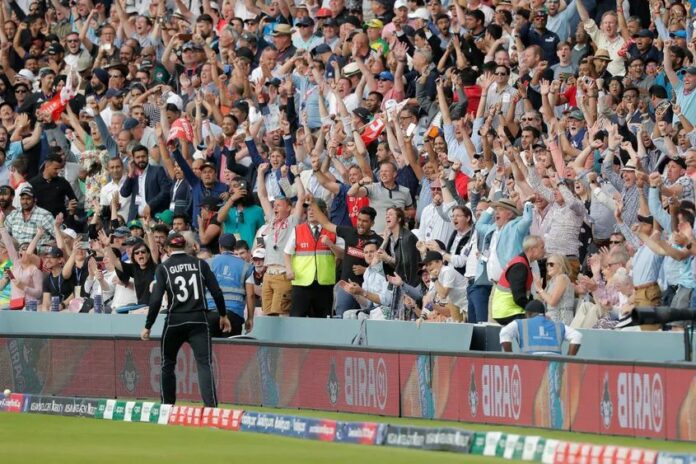 Cricket and sports fans across the world will be able to enjoy unparalleled coverage of the ICC Men’s T20 World Cup 2021, when the tournament returns after five years on Sunday, 17 October.

Nearly 10,000 live hours of coverage – more than ever before – offered across TV and digital platforms in 200 countries

Cricket and sports fans across the world will be able to enjoy unparalleled coverage of the ICC Men’s T20 World Cup 2021, when the tournament returns after five years on Sunday, 17 October.

The pinnacle of the shortest format of cricket offers explosive cricket and entertainment for everyone and features cricket’s biggest names and best teams.  The event, the biggest ever to be staged in the UAE and Oman, begins Sunday in Muscat and finishes with the final in Dubai on 14 November.

ICC TV will produce live coverage of all the matches in the ICC Men’s T20 World Cup 2021, and a full world feed service for licensees including a pre-match show, an innings interval fill and a post-match wrap-up.

Commenting on the game and how it has evolved, former defending captain Darren Sammy said: “Twenty20 cricket provides maximum thrills to fans and it’s no wonder that it is considered to be the vehicle for the growth of the game worldwide. Believe me, there are no easy games in this tournament and it has been nothing less than a dream for me to lift the trophy twice for my team. I still back the West Indies to defend their title but I really wish all the teams the very best. It will be a great pleasure being in the commentary box this time.”

Dale Steyn added: “It’s an honour to be part of the commentary team at the ICC Men’s T20 World Cup and a pleasure to be watching all the action from close quarters. The game has changed a lot in recent times and there is some really exciting talent out there waiting to make its mark. I am sure there are lots of explosive performances and close finishes in store. I can’t really pick a team to win it yet, and that is what makes the tournament all that more exciting – all the unpredictability, along with the anticipation.”

Speaking ahead of the tournament, Nasser Hussain said: “This is going to be a massive tournament with the world’s top players in action in the fastest evolving format of the international game. Not only do we get to see the leading teams, but we also get a chance to see the emerging teams fancying their chances in the T20 format. I can’t wait for the tournament to begin and I’ll enjoy working on these mouth-watering contests.”

Ian Bishop added: “It seems unfathomable that five and a half years have passed since the last edition in 2016. In that time, the format has developed, and grown exponentially. The power hitting of modern the batter, the mystique and skills of the spinners, the pace and variations of some of the fastest and best fast bowlers in addition to the dynamic athleticism of fielders, promise to make this the most exciting and entertaining edition of the Men’s T20 World Cup yet. Each competing nation has invested heavily in enhancing their team’s resources in preparation for their attempt to be crowned “world champions”. I am thrilled and honored to be a part of a diverse and dynamic commentary team covering and conveying the many narratives of this auspicious global event. We all remain mindful of the damage wrought in the ongoing fight against the global pandemic. As such, we endeavor to communicate to you all the joy, beauty and healing that cricket can deliver to every nation.”

The ICC TV production will see a minimum of 35 cameras at all venues. Viewers will be treated to state-of-the-art coverage which will include live player tracking and a dynamic field plot provided by Quidich Tracker.

Read More – Muralidaran: Delighted to see how spinners have prospered in T20 cricket

For the first time in cricket, we’ll also see tracking off the bat, which will be provided by Hawk-Eye in select matches, in addition to their ball tracking and edge detection services. Stunning multi-angle “spin around” replay sequences from 4DReplay, facilitated in partnership with Star Sports, will also be available for select matches in the Super 12 phase. Cable-suspended camera system Spidercam and cricket analytics service CricViz will also be integral elements of the ICC TV coverage.

Cricket fans all over the world have the opportunity to follow the biggest matches and biggest moments across a suite of platforms.  The coverage is the most extensive ever for a men’s T20 World Cup and includes:

Live: Nearly 10,000 hours of live coverage across linear and OTT channels from the ICC’s broadcast partners to fans in over 200 countries.

Radio: Live match coverage across key radio platforms througout the world, including AIR in India, BBC across the UK and ABC in Australia.

Support Programming: Live shows on ICC’s Facebook before and after every game, with expert analysis and interviews. Separate shows will be offered in Hindi, Urdu and Bengali for relevant matches.

The coverage has been designed to excite and engage new and existing fans across a host of content channels to ensure fans can ‘Live The Game’ wherever they are and whenever it suits them.

For the full schedule of the tournament refer here.

As part of the ICC’s partnership with Facebook, a dedicated team will be creating content exclusive for Instagram Reels and working with creators to reach new audiences. A suite of “challenge” videos will inspire fans young and old to get off the couch and beat their friends with a range of cricket skills. In addition to the Facebook deal, in the UK and New Zealand, fans can also view short format clips of the tournament on BBC and Spark, whilst in the US these can be viewed on ESPNCricinfo.com, ESPN.com and ESPN+.

The official tournament website and app is the home for all the tournament scores, stats, news and video, with highlights dropping throughout the match and a complete recap and all wicket replays available at the end of the game. Key features include a new notification engine that allows users to better personalize their app experience to ensure they don’t miss a moment during the event.

The official tournament app and website are closely integrated than ever with the official fantasy game, Dream11. Users will be able to see which players are scoring higher and who other users are selecting most in each game.

Also, through the tournament fans can test their cricket knowledge with the MRF Tyres Quizzes, vote on the Nissan Play of the Day, enjoy curated highlights packages thanks to OPPO, Booking.com and other partners alongside great behind the scenes content with players.

For all fans wanting to engage with the tournament on social media, the official hashtag for the ICC Men’s T20 World Cup 2021 is #T20worldcup.