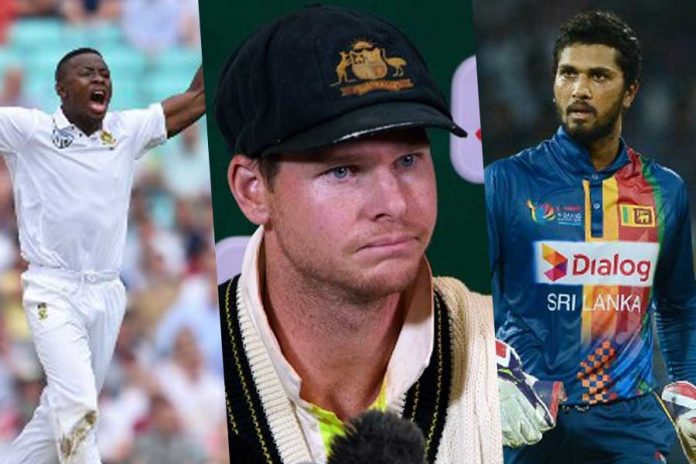 The fallout has continued from the ball tampering scandal that rocked Australian cricket last week as Cricket Australia stepped up their investigations on the events that have earned Steve Smith a one match ban and a 100% fine on his match fee as well as a 75% fine for Cameron Bancroft, from the ICC.

Many pundits and former players believe that Steve Smith’s position as skipper of the Australian team is untenable while also warning that the stain of events will probably stay with the batsman for the rest of his career. He and Bancroft along with deputy David Warner have been deemed as the men responsible for the scandal by Cricket Australian and will play no further part in the Test series.

Added to this, reports are now emerging that ICC’s no.1 ranked Test batsman, Smith may be handed an extended ban from the nation’s governing body.

In the presser held after the 3rd day of play in the 3rd Test Smith admitted that the team or ‘leadership group’ had come up with a plan to rough up the ball, with Cameron Bancroft, the least experienced member of the team been entrusted with the responsibility of carrying out the deed.

The events in Cape Town have meant that now, every action of the Australians leading up to the game is being scrutinized, with their bowling performances in particular, being called into question. Smith’s statement that the ball tampering was a one-off mistake has been challenged by many, claiming it happened earlier in the series.

Smith, Warner, Bancroft to be sent back, Lehmann remains coach

During the past couple of days, it has come to light that the broadcast company handling the South Africa vs Australia series were in fact tipped off that something suspicious was going on and had made it a point to track the ball in the Aussies’ hands which in turn led them to capturing Bancroft in the act of using a piece of tape to scuff up the ball.

England quick Stuart Broad has also weighed in on the situation indicating that there would be no reason for Australia to change their tactics with regards to how they handled the ball, as it had been working so well for them.

Speaking after the fourth day of the first Test against New Zealand in Auckland, Broad said: “I saw Steve Smith in his press conference say it’s the first time they’ve tried it, which to me seems really surprising they’ve changed a method that’s been working. Look at the Ashes series we’ve just played, look through all of those Test matches and they reverse swing the ball sometimes in conditions you wouldn’t expect the ball to reverse. So, I don’t understand why they’ve changed their method for this one game?”

Other cases of ball tampering

Smith and Bancroft are hardly the first players to have been charged with attempting to alter the condition of the ball but it is perhaps the means in which the whole incident played out that has gotten the team as much backlash as it has. The fact that this plan was hatched by the so-called “leadership group” at a break of play and is something the captain and most likely the coach knew about added the fact that Australia is not a very well-liked team has blown the whole incident up, perhaps out of proportion.

It is worth noting that in the past, with the exception of Shahid Afridi, all the other players pulled up for the same offense faced less severe reprimands from the ICC.

Comparison with other unrelated charges

In the aftermath of the events, the sport’s governing body fined Smith 100% of his match fee and Bancroft 75% of his, while Smith was also handed a 1 Test ban. Many have seen this as the pair getting off very lightly, comparing it to two of the most recent punishments handed out by the ICC – Dinesh Chandimal’s 2 T20I ban and Kagiso Rabada’s 2 match ban (reduced to 25% fine and 1 demerit point on appeal)

Smith steps down as RR captain, Rahane to lead

Steven Smith, Australian skipper, has stepped down as captain..

Sri Lankan skipper Dinesh Chandimal was banned for two games during the recently concluded Nidahas Trophy after his team failed to complete their allotted overs during the prescribed period of time. Match referee Chris Broad imposed the suspension on Sri Lanka’s captain, after ruling that the home side fell four overs short of their target during their match against Bangladesh early in the tournament. According to the ICC’s code of conduct, a team falling short by up to two overs is said to have committed a “minor over rate offence”, and a “serious over rate offence” if it is short by more than two overs; the result of which sees the team’s captain receiving two suspension points for a serious over rate offence, which equates to a ban from one Test, two ODIs or two T20Is, whichever comes first.

In the 2nd Test between South Africa and Australia, Kagiso Rabada was charged with “making inappropriate and deliberate physical contact” with the Australia captain, Steve Smith. He received 3 demerit points which took his total to 9 – triggering an automatic two-match suspension.

The 22-year-old’s ban was overturned on appeal and was instead charged with “conduct that is contrary to the spirit of the game”, fined 25% of his match fee and received one demerit point.

These incidents have brought into question the ICC’s Code of Conduct, how is it that Chandimal’s and Rabada’s offenses fall under the same category (a level 2 offense) as blatant cheating – which Steve Smith admitted to.

The simple answer is that ball tampering in truth is not seen as a major offense by most, particularly with many past players insinuating that ‘everyone does it’, whether it be by roughing the ball up by getting it to the keeper on the bounce or using various sweets to help shine the ball.

So, has ICC gone easy on the Aussies? According to the prescribed Code of Conduct, they have not. They have done what they could with the existing rules.

The worst punishment for Smith, Warner and Bancroft are likely to come from Cricket Australia itself with reports suggesting a 12 month ban being the likeliest outcome.

ICC going easy on the Aussies?