Home Cricket National Cricket I have no regrets – Rangana Herath 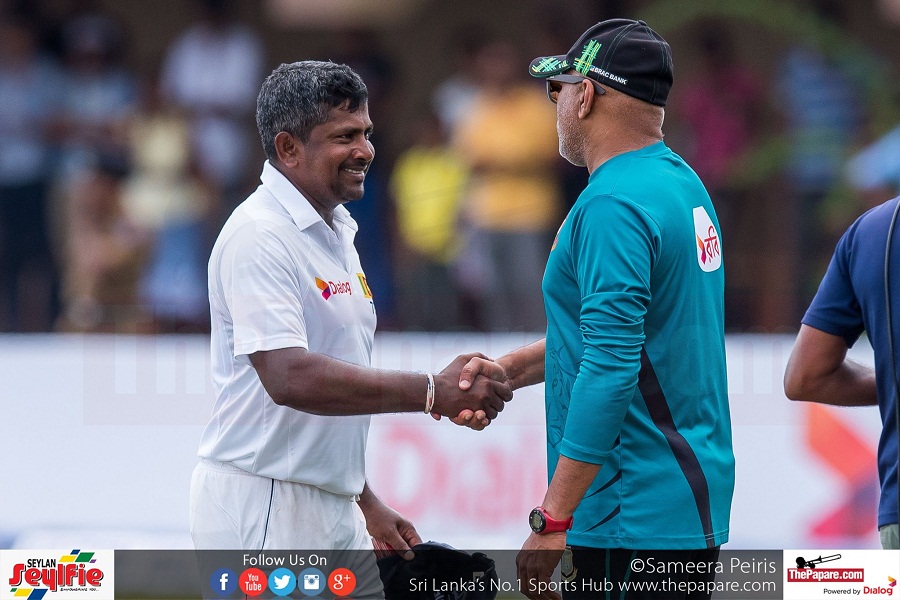 With Bangladesh staring down the barrel, wicketkeeper batsman Liton Das went for a big slog over the leg side but only managed to top edge the ball to the man at cover, giving Rangana Herath his 363rd Test wicket. With it Herath went past New Zealander Daniel Vettori’s 362 wickets, becoming the most successful left arm spinner in the history of Test Cricket.

It was a historic moment and one that was duly recognized as such by all those present at the Galle International Stadium on the 5th and final day of the 1st Test between Sri Lanka and Bangladesh. Herath was mobbed by his teammates and the skipper held the ball up in acknowledgement of the crowd’s cheers.

At an age when teams play up to 20 Tests a year, 39 year old Herath has only played 79 games and we all know why. Much has been said, and written, about him living in the shadows of legend Muttiah Muralitharan – mostly implying that Herath is unfortunate to have started off when he did. Since Murali’s retirement in 2010, Herath has managed 296 wickets at 25.91, just a shade better than his career average which stands at 27.97. Herath, however, is satisfied with how things have panned out.

“I have no regrets. I have already played 79 Tests. I am very happy with the way I’ve played and with what I’ve achieved.”

As it stands, it is hard to imagine that the old warhorse will go on for much longer and the question of retirement is never far off. The good news for Sri Lankan fans is that it appears that Herath still has his sights set on the 400 wicket mark.

The captaincy is also something that Herath has shouldered during the absence of Angelo Mathews and despite it not being something that seems like a long term option for the Sri Lankans, he has not written off the possibility of captaining for a more extended period of time.

“I’ve captained only 3 games. I don’t know about Angelo’s injury and all but we will need to have a proper chat and make a decision.”

Despite some criticism of Sri Lanka’s delayed declaration last evening, the skipper expressed that the Sri Lankan dressing room was definitely onfident of being able to dismiss the Bangladeshi batsman in the final day. And likewise, Herath delivered alongside Dilruwan Perera.

“They were batting 4th on the 5th day at Galle. So I think the pressure was always on them to survive. I had a lot of belief in our bowlers, especially Dilruwan and Sandakan. It’s never easy on the last day chasing 460, so we believed we could win.”

Herath went on to take three more wickets after the wicket of Das on his way to figures on 6/59, his 10th 4th innings 5 wicket haul and 29th overall.