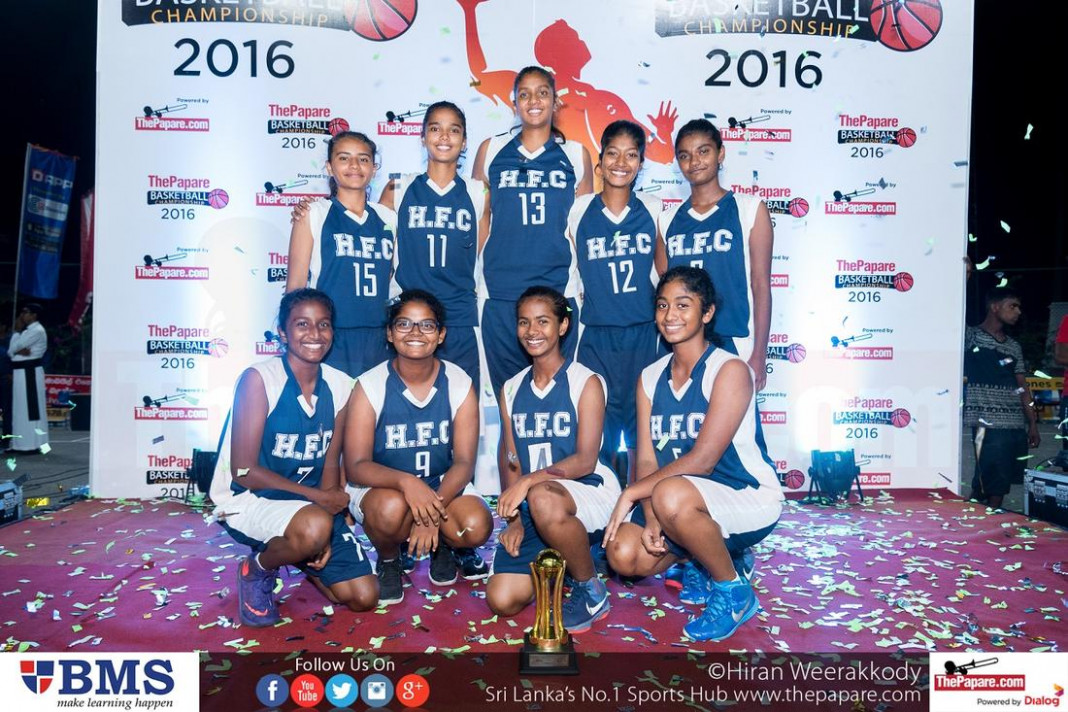 Holy Family Convent Bambalapitiya and Presbyterian Girls’ School Dehiwela went head to head last evening at the Henry Pedris Basketball Complex for the 3rd place playoff of the ThePapare.com U-19 Girls’ Basketball Championship 2016. HFC walked away as winners beating their counterparts, 49-34 at the final whistle.

Holy Family Convent got the scoreboard ticking with skipper Dilumi Gunawardene posting a quick layup; driving on the fast break. The Presbyterian girls replied with a 6-0 run on the next couple of plays. HFC stuck to a man to man defense in the first quarter; but their opponents managed to penetrate well and pass into the paint. PGS, playing aggressively, did not allow the Familians to settle down in the initial minutes of the game. The Presbyterian skipper, Dilakshi Nawodya, drove the lanes really well, taking charge of her team’s offensive unit. PGS led the first quarter, 9-13.

The initial minutes of the second period, saw both teams make a few attempts at the basket. Possession was frequently switched between the schools, with both teams eventually losing the ball before they could settle down on their offense. The HFC defense improved over this period, forcing their opponents to make two shot clock violations in quick succession. Presbyterian Girls’ School had a hard time working the ball around as Dilakshi Nawodya and Nipuni Nawodya were the only two players stepping up to it. The duo clearly lacked support from their teammates. However, PGS managed to secure a slim 17-20 advantage over HFC at halftime.

The girls from Dehiwela were put under tremendous pressure in the second half. HFC improved their overall game in terms of both their defense and offense. They put up a 9-0 run for 7:30 of the third quarter. PGS suffered a massive cut in their scoring, managing to score only two points for the progression of the quarter. HFC managed a mammoth 17 points in contrast, with skipper Dilumi putting up 12 points that included two brilliant three pointers. It was in this quarter, that the girls from Bambalapitiya finally made full use of their height advantage. As the tables turned, HFC walked out of the third period, leading 34-22.

The Presbyterian Girls were in mere desperation to narrow the deficit in the final quarter of the game. They resorted to a full court press on the defense. Their attempts at the basket failed, as they fell short on many occasions. There was no stopping the Familians in this quarter as they matched their fast breaks with adequate steals and blocks on the defense. It was a clear lack of support play on the Presbyterian side of the game, with a couple of players stepping up from time to time. The lack of cohesiveness led to their losing of the upper hand maintained throughout the first half. Holy Family Convent Bambalapitiya emerged victorious at the final whistle, securing the 2nd Runners up title in the Girls’ segment of this tournament. The final score was 49-34, in favour of the Familians.