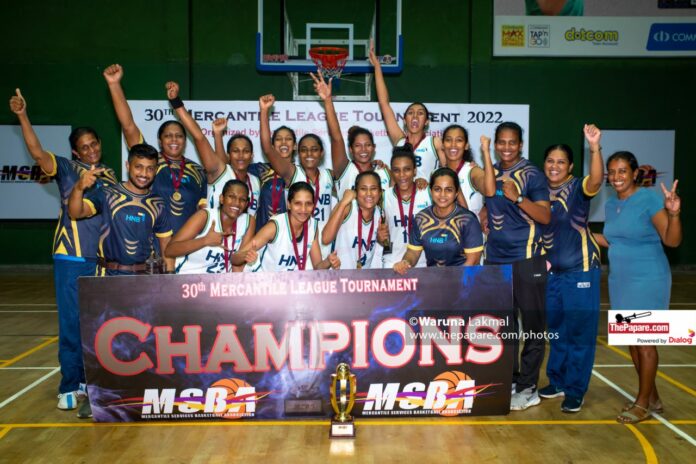 Royal College Sports Complex was the host for the Mercantile Basketball Women’s finals played last evening. (26th October) HNB faced off against Commercial Credit and emerged the victorious in a thrilling encounter, finals scores stood at 50:46.

HNB had the first possession of the ball and was unable to convert it to a point. Till the 3rd minute of the first quarter both the teams were struggling to open their accounts. Pawani Ranepura started the scoring for Commercial credit with an under the basket shot while Taniya Perera opened the scoring for HNB.

Knowing each other’s strengths, both the teams deployed an intensive 1-2-2 defense in the first half, although Commercial Credit changed it to a man-to-man defense and a full court press in the second half. It didn’t really work out as planned however.

Coming into the third quarter, HNB kept on scoring and getting those rebounds. HNB’s experience kicked in by the 4th minute of the 3rd quarter as Anjalee Ekanayake and Malmi Hettiarachchi led the court. Commercial Credit was having a nightmare in the third quarter, all the shorts they made were too short, and their defense was not up to the level of the HNB offense.

Third quarter ended with a score line of 41-28 in favor of HNB ladies.

4th quarter was nothing but a jaw dropping performance by the two rivals. Commercial Credit made sure to convert most of the buckets they attempted. By the 8 minute of the last quarter Commercial Credit found their momentum, but it was too late as HNB kept on scoring to be on the lead.

HNB made sure that commercial credit girls were restricted from scoring by tightening their defense. Although Lubna Morseth and Imesha Thathsarani manage to close the gap capitalizing on penatrations. Even though they dominated the 4th quarter it was a little too late since they were trailing by 13 points and they ran out of time.