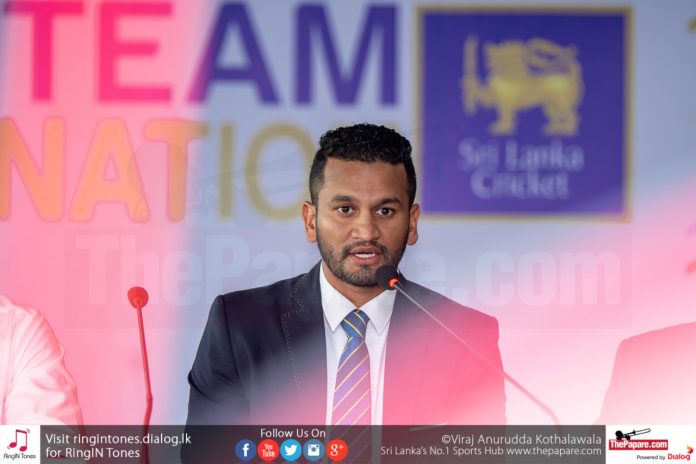 Sri Lanka stand in Test captain Dimuth Karunaratne and the players of the Test squad who will not be participating in the upcoming ODI series vs South Africa, have been welcomed in a special press conference today, at the Sri Lanka Cricket HQ with the participation of SLC President Shammi Silva, Secretary Mohan de Silva and COO Jerome Jayaratne.

>>A series made in heaven – Cricket’s David vs Goliath story<<

Mohan de Silva welcomed the team mentioning the special performances of Kusal Perera, Kusal Mendis and Vishwa Fernando and thanked the head coach and the support staff for the incredible work they have done behind the scenes.

The first visiting Asian Test captain to lead a team to beat South Africa in a series, Dimuth Karunaratne addressed the media for the first time after landing in Sri Lanka. “This win is mainly because of the collective effort from our team. New comers like Oshada, Lasith and Vishwa have done exceptionally well, our bowlers’ performances shouldn’t be forgotten. They have set us low targets to chase in both of the matches.”

Answering a question on what they have done differently in this series, Karunaratne said, “Vice- captain Dikwella and myself talked with the coaches and supporting staff on what needed to be changed. We wanted to forget about past losses and face this series with a fresh attitude. We believed in each other and we chased one goal as a team”

“I think that video shouldn’t have gone out of the dressing room, I am disappointed about that”, he added regarding the video that went viral on social media.

Further explaining on the team culture, “we wanted to reduce the restrictions which the players had to follow. They have been given the freedom to enjoy themselves and gradually, that sparked a sense of stronger team spirit in the players.”

“I don’t have big expectations, if the selection committee decides I’m a worthy contender for the captaincy, I’ll gladly accept that”, he answered a question on accepting the permanent captaincy of the Test team.

>>They went, they fought, they conquered!<<

“It’s a myth that our domestic setup is not up to standards. If these players who have been performing well in club level, have the dedication and temperament, they can succeed in international stage”, Silva added.

He wished good luck to the Lasith Malinga led ODI team for the upcoming challenge against South Africa.