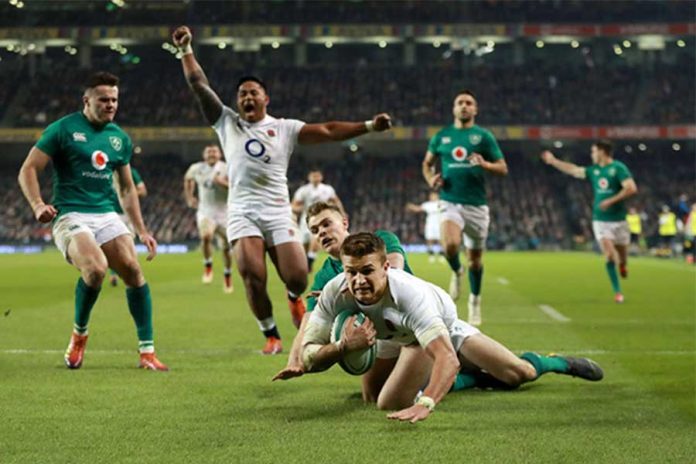 The defending champions were the favourites for this first-round match in Dublin, but England put the hosts under pressure with their kicking game and were clinical when creating scoring opportunities in the second half.

The crucial score game in the 67th minute. From a scrum in the middle of the pitch, England opted to attack the blindside with Ben Youngs passing to Slade and the centre sending the ball out to Jonny May on the touchline.

With Ireland’s defenders drawn to the threat of May’s pace, the winger kicked downfield and Slade had green grass in front of him to touch down.

Referee Jerome Garces called in the TMO to check that Slade hadn’t been in front of May when the kick was made – it was tight but he wasn’t in front.

Ten minutes later, Slade then added gloss to the victory by intercepting a Johnny Sexton pass in the Ireland 22. He fell over but retained possession, got up and stretched over the line.

May had got England off to a brilliant start by scoring a try within two minutes of the whistle blowing. Owen Farrell sent a miss-pass to Elliot Daly and, with a two-on-one advantage, the full-back sent May sprinting away for the corner.

England’s other try, much like in Paris the night before, came from an error by the hosts.

Daly put through a kick and as Jacob Stockdale tried to gather the ball when retreating, he lost possession as he was tackled by Jack Nowell over the line and Daly touched it down for a try.

England welcome France to Twickenham on Sunday with last year’s dismal Six Nations campaign a distant memory, while Ireland head to Scotland with hopes of a back-to-back Grand Slam extinguished.