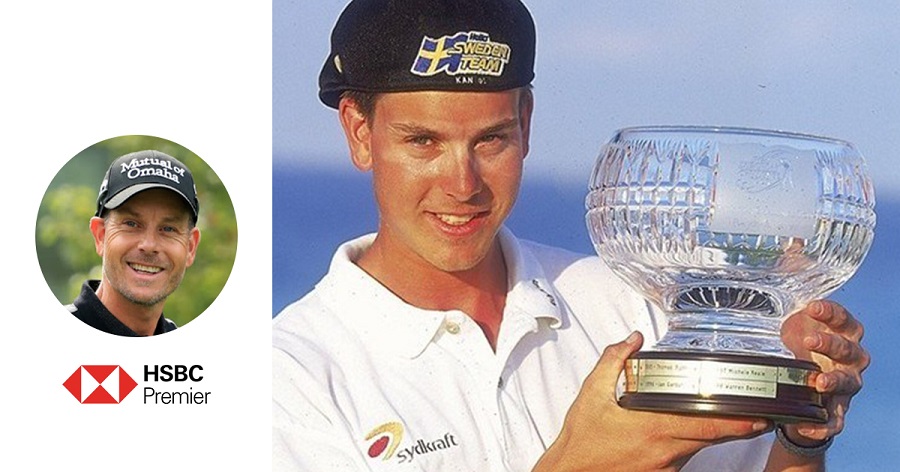 Henrik Stenson, Swedish Golfing Champion, speaking at the HSBC Premier Lifestyle Webinar Series to host Andrew Cotter, renowned BBC Sports Commentator, spoke of his early beginnings in the sport and the role it has played in his life.

Stenson, who is a two-time European Tour Golfer of the Year (2013 and 2016), has spent over 100 weeks ranked in the top ten of the Official World Golf Rankings between 2007 and 2010. His career high world ranking of second is the best by any male Swedish golfer. Stenson’s beginnings in the sport were quite unusual for someone who has achieved so much over the past two decades, as he conveyed to Cotter, “My background and way into the game was a little different. My family didn’t play golf and I didn’t really know too many people who did. When I was 11 one of friend’s families played golf and just asked me if I’d want to join them and try it out and I did. I hit a few five irons out of the middle and showed some signs. I thought it was a fun game. I got stated a bit late, at 11-12.”

Despite starting at what was considered ‘late’ Stenson seemingly took to the sport like a duck to water and 3 years after his first golf lesson with local pro Richard Bayliss at Gullbringa Golf & Country Club, he was hooked, hooked enough to give up Sweden’s most loved sport, Football. “When I was about 15, I really felt that this was what I wanted to pursue and I gave up some other sports that I played, football for an instance. I called the coach up and said, ‘I’m not going to leave the golf course to show up at practices anymore so I might as well quit playing football’. That’s when I put all my effort into the sport. At 16-17 I had really set my sights on trying to become a professional one day.”

With 6 PGA Tour Championships and 11 European Tour Championships under his belt and a number of Ryder Cup appearances, Stenson has seen his fair share of highs as well as lows. But through it all, he has steadily progressed through to remain one of the top players in the world. He noted to Cotter how it was the tough times that he encountered that made him who he is as an individual and as a golfer. “It’s certainly been a rollercoaster career on my own end, with two major slumps that are well recorded and well known. When times are tough and things aren’t going your way, you will be tested and I think those are the times when you learn the most about yourself.”

As it is with anything in life, success does not come easy, even for the most talented individuals and as such, the value of hard work is immeasurable. With thousands vying to book a place on tour, Golf is an extremely competitive sport. So, Stenson’s message to those watching the Webinar, particularly the younger audience was on the value of hard work, particularly in a sport that is tough to find success in, more so in nations like Sri Lanka. “It is a tough sport to succeed in but that goes for everything. If you want to be out there and playing and competing with the best then no matter what you do, it’s going to take a lot of hard work and dedication. It’s a lot of players who want to be out there but only a few who can make it. But, like with anything, if you have a dream, if you’re willing to work hard, you can certainly succeed.”

Though in his words, not the ‘most talented junior golfer’ hard work and the right attitude through the years has seen Stenson progress steadily and stay competitive even 21 years since turning pro.