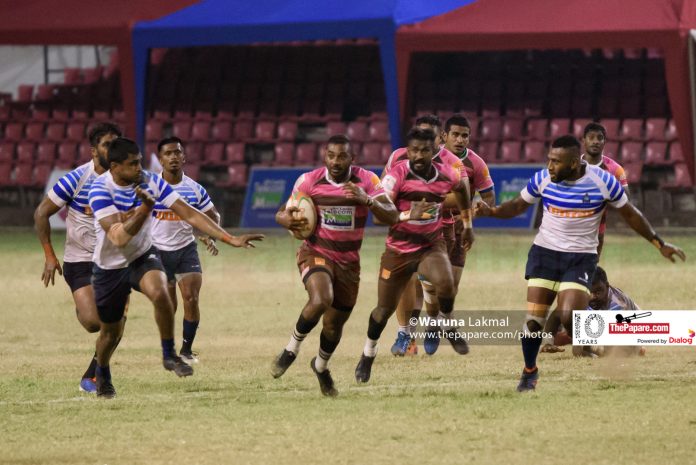 Havelock Sports Club narrowly got over the line against Navy Sports Club as the hosts had to grind out a tough 25-18 win in the Dialog Rugby League game played at the Park.

Havelocks’ were forced into two changes as Charana Chamikara and Sandesh Jayawickrama missed out due to injuries. Faiz Abdulla and Ashan Bandara made the cut in the run-on XV.

Meanwhile, Navy made six changes, notably Gihan Perera returning to the starting line-up as Mushin Faleel assumed the captains’ duties in the absence of Richie Dharmapala.

Visitors Navy got off to a reasonable start as Isuru Kongahawatta nudged home on two occasions as early pressure from the visitors paid dividends. (Havies 00-06 Navy)

Navy failed to turn their swift start into further points as the home team turned up, tightening the screws in their defence to hold their opponent at bay.

This aided the hosts to turn defence into attack and get their first points of the day through a trademark forwards try.

Umesha Madushan was the beneficiary as the big second-rower found himself crashing over the white-wash to score. Santhush Algama failed with the extras as Havelocks reduced the error to a single point. (Havies 05-06 Navy)

The home team assumed control of proceedings as Navy’s grip on the game loosened, leaving room for Havelocks’ to grind their way back into the encounter.

The Pinks scored their second of the game, in a similar fashion to their first as the Havelocks’ forwards upped the ante.

Shawketh Lahir was the man at the tail of the maul this time around as the visiting forwards were no match to the characteristic ‘Sanath Martis’ rolling maul. Algama failed with his second kick at goal as the lead changed hands. (Havies 10-06 Navy)

Kongahawatta missed an opportunity to cut the deficit further as the five-eighth missed in uncharacteristic fashion from in front, however, Maleesha Madumewan’s yellow card in the 35th minute meant Navy smelt blood with half-time fast arriving.

Navy capitalized on the advantage as flanker Radeesha Senevirathne drove his way from close range to crash over to take Navy into the break with a slender 1-point lead as Kongahawatta failed to add the extras.

Both teams came out for the second half following words of wisdom from each coach, with everything on the line.

Words from coach Sanath Martis rang the loudest; Havelocks were the first to get on the scoresheet as Lahir doubled his try tally. The former Royal flanker broke off a rolling maul, finding himself diving over untouched from 2-meters out.

Algama seemed to forget his kicking boots as he failed with his third consecutive kick at goal, however, the lead shifted hands yet again. (Havies 15-11 Navy)

From then on, both defensive outfits came to the show as a 100-mile an hour game at the Park failed to yield points for nearly 20-minutes.

The visitors were the first to strike as the home defence seemed to look weary. After spreading the ball from side-to-side, the Sailors found themselves casually working an over-lap on the near side as fullback Gayan Wickramarathne finished amidst a high-shot from Randy Silva.

Havelocks’ were struck with a double whammy as Silva was sent to the bin as Wickramarathne’s try was converted by Kongahawatta from the touchline. (Havies 15-18 Navy)

The home team struck back not once but twice as try-scorer Wickramarathne himself saw yellow for a deliberate knock-on.

First, Azmir Fajudeen scored the bonus point try for the home team as the maul continued to prove unstoppable.

Moments later, quick thinking from lock Madushan saw the giant of a man raise away from the try line off a loose ball from the visitor’s line-out to put the game on a knife-edge, heading into the final 6-minutes.

Algama’s torrid day with the boot continued as he failed to convert a single kick off the tee. (Havies 25-18 Navy)

The visitors made one final push towards the hosts try line with intentions of salvaging a point, however, the home defence held firm proving to be immovable as Havelocks ground-out a tough win, continuing to apply pressure on Police Sports Club.