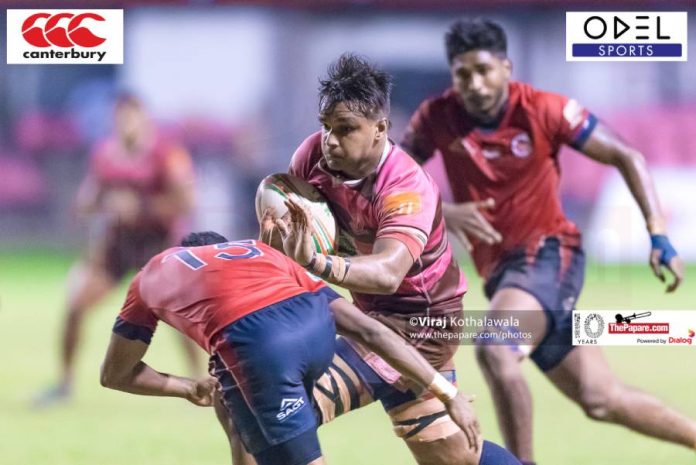 Havelock Sports Club overcame rivals CR & FC 30-22 in a tight tussle at the Dialog Rugby League to remain in second spot on the table.

Meanwhile CR & FC made 8 changes coming from their drubbing against Kandy, with Sharo Fernando battling against his old club alongside the forwards Gayan Dilshan and Wajid Fawmy. Harith Bandara partnered with former Royalist Kalindu Nandila at 9 & 10.

Sandesh Jayawickrama slotted home from in front eight minutes into the game after kicking off as the visitors were penalized for rushing up offside. (Havies 03-00 CR)

Janidu Dilshan, leading try scorer of the season, crossed over the whitewash minutes later as the visitors finally found their feet in the game.

Riza Mubarak failed with the extras in uncharacteristic fashion as the Reds took a narrow lead. (Havies 03-05 CR)

The lead did not last long and changed hands yet again just 5 minutes after Dilshan scored, as lock-forward Umeshka Dilshan crashed over. Sandesh Jayawickrama made no mistake from the tee, adding the crucial extras as Havelock too control of proceedings once again. (Havies 10-05 CR)

Both teams were short of one man as Kevin Dixon and Abdulla Faiz were both sent to the sin bin for indiscipline play as the game heated up.

With both teams down a man and the action being brought on fast, the visitors were awarded a penalty try as a rumbling CR maul was brought down illegally. The seven-pointer was soon cancelled out as the visitors were reduced to 13 men as Sharo Fernando was sin binned for ill-discipline at the breakdown.

Former Josephian Sven Muller, who replaced Azmir Fajudeen early on in the game when mainstay Havelock hooker was knocked out, was the beneficiary when he found himself at the right place at the right time, at the tail of a maul to crash over and take the host into lemons with a narrow lead.

After two pumped up half time chats from both coaches, both sides came out fighting. It was the visitors who managed to level proceedings through a penalty off the boot of Riza Mubarak, as th e energy levels of both teams went through the roof. (15 All)

Returning flanker Shawket Lahir crashed over the whitewash twice soon after to deflate the visitors and create a gap between the two sides.

Sandesh Jayawickrama converted one try and booted over a penalty, as the hosts seemed to run away with the game with a 15-point gap. CR looked all but gone with the final 10 minutes left in the game. (Havies 30-15 CR)

Charana Chamikara saw yellow for a ridiculous late charge on Omalka Gunaratne, as the former CR lad aimed to get one over his former employer.

With the hosts short of a man in the final 10 minutes, CR upped the tempo with hopes of a comeback in similar fashion to the Sailors against the Soldiers.

Gemunu Chethiya entered the field after being substituted for Kevin Dixon and the former Josephian scored with just three minutes remaining in the game. Riza Mubarak made no mistake with the extras, however the game was out of reach of the visitors as they continued to trail by 8 points. (Havies 30-22 CR)

With the bonus point secured by the hosts, the visitors chased an all illusive bonus point; however it wasn’t meant to be as the visitors left empty-handed. Havelock’s SC consolidated their second place with the win, while CR & FC dropped to fourth place with their defeat, as Master Coach Sanath Martis got the better of Apprentice Dushanth Lewke.