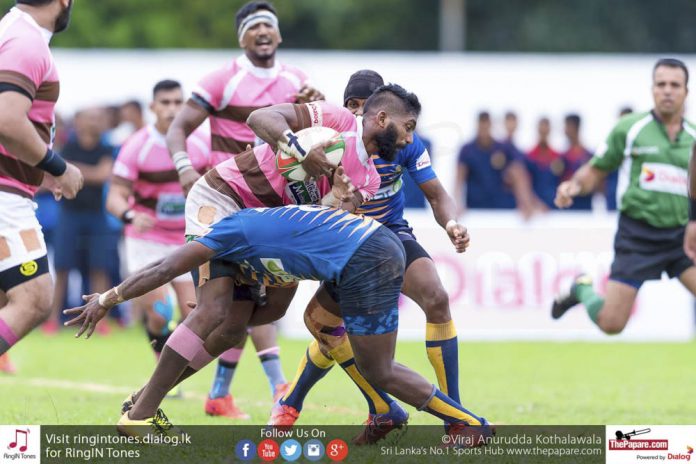 Havelock SC managed to qualify to the semi-final of the Dialog Clifford Cup after defeating Army SC 41 points to 20 at Police Park earlier today.

Rizah Mubarak kick started the game with the wind favouring his side but it were the soldiers who dominated from the beginning – gaining yards, taking hit after hit, which eventually saw Army inside centre, Janith Lanka slice his way through the defence drawing first blood for the Army SC 10 minutes into the game. Gayan Salinda added the extras. (ASC 07-00 HSC)

The next twenty minutes of the game saw the soldiers change gears, which changed the momentum of the game. Switching from offence to defence cost the soldiers as the park boys scored three tries in quick succession.

It was the scattered defence lines that allowed Havelock SC to breach their opponents territory. Dushmantha Priyadarshana was the first to go over the line after barging his way from the back of a rolling maul. Randy Silva was the next to touch down under the post after recieving a pass from Chamara Dabare who made a dashing run from Havies own ’22 till the soldiers ’22. Sudam Sooriarachhi scored the final try before half time when he dove from the blind side of a ruck in the near corner. Rizah managed to convert two out of three kicks while Gayan Salinda managed to maintain a 2/2 kicking rate when he added a three pointer to the Army total. (HT: HSC led 19 – 10 ASC)

As the second half kicked off, the soldiers displayed signs of frustration, leaking out penalties which cost them dearly. As a result of their indiscipline, Sugath Nanayakkara was sent off and the boys in pink were awarded a penalty try in the 54th minute which was followed by another solitary try by Prasad Madusanka in the 60th minute. Rizah failed to add the extras. (ASC 10-31 HSC)

As the game entered its final stages, the soldiers were giving it their all. Manoj Bandara and Samira Bulathsinghala managed to go over the line for Army in the 68th and 80th minutes, but the game was long lost in 78th minute when Dinuk Amarasinghe scored in the near corner after finishing a well executed ploy. The referee blew the final whistle as Rajith Sansoni, who came in as a substitute for Rizah bisected the posts with his conversion.