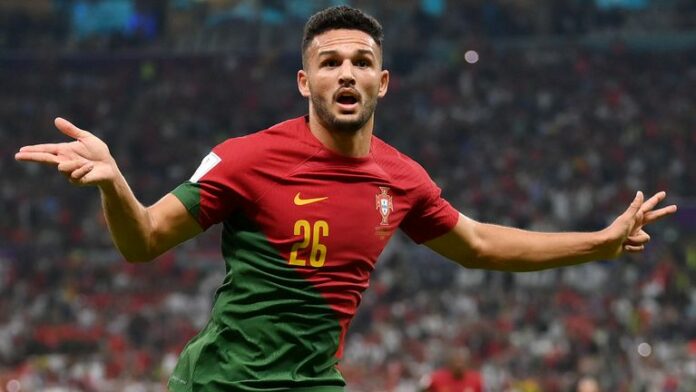 Goncalo Ramos woke up this morning relatively unknown outside his home country. The 21-year-old will rest his head on the pillow tonight after writing his name in FIFA World Cup™ folklore. Benfica player Ramos was the surprise pick of coach Fernando Santos, chosen ahead of the man at his fifth World Cup, the incomparable Cristiano Ronaldo.

What big boots to fill and by the end of the game Ramos would have needed a shoehorn to squeeze himself in. Portugal were irresistible, vastly improved on a pair of steady group-stage victories over Ghana and Uruguay, and it was Ramos who started the party after 17 minutes.

Joao Felix progressed into the box unchallenged, eventually feeding Ramos, granted freedom to turn by Fabian Schar, who was soon regretting his hesitation. Ramos unleashed a corkscrew shot that flew past Yann Sommer at the near post. It was not dissimilar from Ryan Giggs’ FA Cup semi-final strike beyond David Seaman in 1999.

Goalkeeper Sommer saved from Ramos and Otavio and Portugal No1 Diogo Costa was worked by Xherdan Shaqiri’s dipping free-kick, before Portugal scored their second. Schar did well to divert a searching cross behind but when Bruno Fernandes sent over the corner, 39-year-old Pepe sprinted to the edge of the six-yard box to plant a header past Sommer and become the second-oldest World Cup goalscorer behind Roger Milla, who was 42 when he netted at USA 94.

There remained a semblance of a contest entering the second half. That was until Ramos dashed to the near post to convert a low cross from Diogo Dalot, who jinked past Ruben Vargas to deliver from the right.

The future is looking bright for Portugal ✨ #FIFAWorldCup | #Qatar2022 pic.twitter.com/Bd7d6r1OTM

Now the shackles were completely discarded. Raphael Guerreiro stormed forward from left-back to complete a flowing move with a conclusive finish high into the net. Manuel Akanji toed in a consolation after Santos inadvertently helped a right-wing Switzerland corner to the far post.

There was never a hint of Portugal bolting the back door to protect what they had. Santos skipped on to a Felix pass to apply an accomplished finish and score the first World Cup knock-out stage hat-trick in 32 years. A lot of water – and world-class footballers – have passed under the bridge since then.

Rafael Leao came on to curl home and complete the rout. Moments earlier, Ronaldo, on as a substitute, ran through to put the ball in the net, only for an offside flag to halt the celebrations. It wasn’t his night. But it most certainly was a night that Ramos and all of Portugal will never forget.

This occurred out of public view when Fernando Santos made up his mind to leave out Cristiano Ronaldo and grant a first international start to Goncalo Ramos.

Imagine the headlines if a richly talented Portugal team that draws its performers from some of Europe’s finest teams had bowed out, with superstar Ronaldo and his 20 World Cup starts and eight goals watching impotently from the bench.

This was in equal parts a gamble from the erudite Santos and evidence of why he is trusted to make the big calls in charge of Portugal. The 68-year-old has been at the helm since 2014 and won the nation’s first major tournament at UEFA EURO 2016. He oversaw more success in the 2019 UEFA Nations League.

Santos has earned the right to go with his gut, then, and the coach patently liked what he saw in a trio of substitute appearances from Ramos – the 21-year-old made a scoring debut off the bench in a pre-World Cup victory over Nigeria and appeared for a combined 10 minutes in group-stage matches against Ghana and Uruguay.

And any external doubts over of Santos’s choices were eradicated after only 18 minutes when the forward walloped home an exhilarating opening goal. Benfica player Ramos finished the night as the first player with a treble in the knockout rounds since Tomas Skuhravy of Czechoslovakia in 1990. Santos would have been confident in his own judgement but how that decision was validated by a young man achieving something no-one had managed in 32 years.

Portugal coach Fernando Santos on Cristiano Ronaldo: “It is good to look and see the example this player gave: Professionalism, showed he is a captain, the way he celebrated the goals, the way he went on, showed a great will.”

Switzerland coach Murat Yakin, who switched to a three-man backline for the fixture: “We had a clear plan, we have practised it, we also had test games, the team was familiar with the system. We tried to put pressure on using the flanks, but unfortunately it didn’t work.

“Ronaldo or not, our players are able to play in every position. Yes, our opponents got a good start in the game, we saw many things not work out for us. There’s nothing we could’ve done today.”