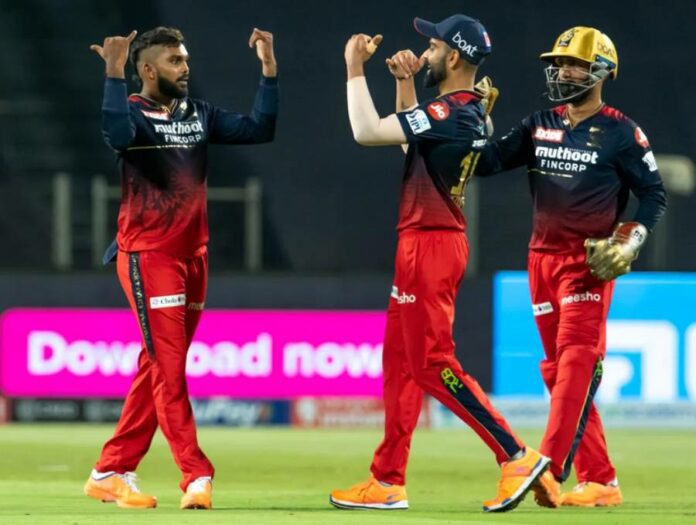 The Royal Challengers Bangalore (RCB) registered their third consecutive victory in the TATA Indian Premier League (IPL) 2022 after defeating the Mumbai Indians (MI) by 7 wickets on Saturday at the Maharashtra Cricket Association Stadium in Pune.

Anuj Rawat’s assured 66(47) at the top helped RCB chase down the target with 9 deliveries to spare after the RCB bowling attack restricted MI to 151-6.

Anuj Rawat hit consecutive sixes against Jaydev Unadkat to get things going. RCB scored 30 in the powerplay but didn’t lose any wicket inside the first six overs.

Rawat smacked a six followed by a four against Murugan Ashwin in the 7th over, which produced 15 runs.

The fifty partnership was up for the opening wicket. Jaydev Unadkat dismissed du Plessis for 16 after the RCB skipper was caught by Suryakumar Yadav at long-on.

Virat Kohli, who was the new batter in, creamed his first four of the innings and RCB were 61/1 after 10 overs.

15 runs were conceded in the 12th over, bowled by Basil Thampi. Kohli started the over with a four while Rawat concluded it with a stylish flick for six followed by a four.

Kohli got a reprieve after the right-handed batter was dropped in the deep by Dewald Brevis as RCB required 41 off the final five overs.

The Kohli-Rawat partnership continued to prosper for RCB as Rawat smashed two more sixes towards the on side.

MI finally scalped their second wicket as Anuj Rawat was run out, thanks to a brilliant direct hit from Ramandeep Singh.

Dinesh Karthik, who was the next batter in, pulled Bumrah for six as RCB required 8 off the final two overs.

Earlier, MI, who were put in to bat first, made two changes – Jaydev Unadkat and Ramandeep Singh were named in the eleven.

Openers – Rohit Sharma and Ishan Kishan started explosively with the bat and imposed pressure straightaway on the RCB bowling attack.

Skipper Rohit Sharma got off the mark with a four and smashed the first maximum of the innings in the 4thover. Ishan Kishan creamed consecutive fours against Hasaranga and the MI skipper wrapped the powerplay with a four as MI were 49-0 after 6 overs.

Harshal Patel provided RCB their opening wicket after the bowler took a sharp catch off his own bowling in the 7th over.

In the very next over, Akash Deep dismissed Kishan, who was caught in the deep thanks to a fine catch by Siraj. The wicket was followed by Tilak Varma’s run out, thanks to a brilliant direct-hit inside the circle from Glenn Maxwell.

MI were 62-4 at the end of 10 overs before they lost the wicket of Pollard, who was out LBW on the first ball against Hasaranga.

Troubles grew further for MI as Harshal Patel picked his second wicket to dismiss Ramandeep Singh, who was caught behind for 6.

Suryakumar Yadav took matters into his own hands and counter-attacked by smacking a six and four against Shahbaz Ahmed in the 15th over.

MI crossed the 100-run mark in the 17th over before Suryakumar slog-swept a six over deep mid-wicket against Hasaranga.

Unadkat supported Suryakumar well with the bat with two fours. MI hammered 23 runs in the penultimate over, which included three exquisite sixes as the fifty was up for Suryakumar Yadav.

The right-handed batter finished the innings in style with a maximum as MI posted a competitive total of 151-6 in the first innings.