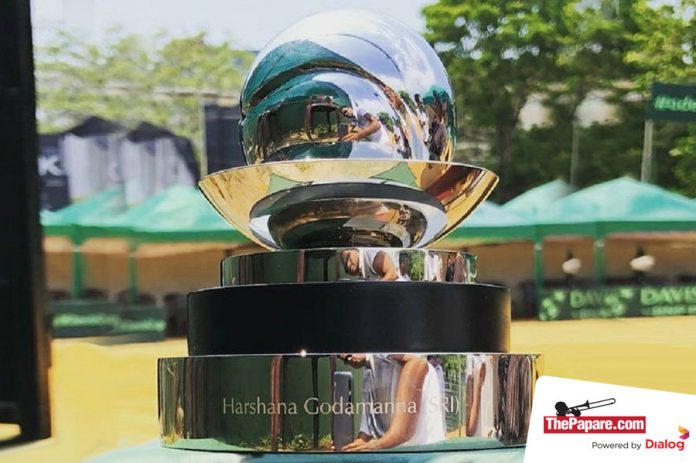 For his outstanding performances, his dedication towards his mother nation and for the remarkable sportsmanship skills shown towards the game, Harshana Godamanna wins one for him and for Sri Lanka as he was awarded the righteous trophy of life-time commitment by the governing body of Tennis in the world (ITF).

The tournament referee for the on-going Group II relegation tie between Indonesia and Sri Lanka presented the award to Godamanna, who heartwarmingly broke down in tears during this historical moment. He is now one of the two living gentlemen to carry the silver wear home, alongside Arjun Fernando who was awarded this prestigious trophy for his 14 years of National representation at the Davis Cup. 17 years of Davis Cup history was in the name of late Bernard Pinto who was the first ever Sri Lankan to receive this award back in the day.

Godamanna holds multiple records within the local circuit to remain one of Sri Lanka’s greatest players as well as in the Davis Cup. He currently holds the most total wins (Clay and Hard) with a tally of 69-25. He also holds the record for the most singles wins (43-15) and with trusted partner Rajeev Rajapakse, the most doubles win at 18-5. To top it all off, Godamanna has played the most ties for his nation with 51 under his belt with this year’s relegation tie against Indonesia.

Stay logged to ThePapare.com for LIVE action from the final day of the Asia/Oceania Davis Cup Zone Group II Relegation tie between Indonesia and Sri Lanka.