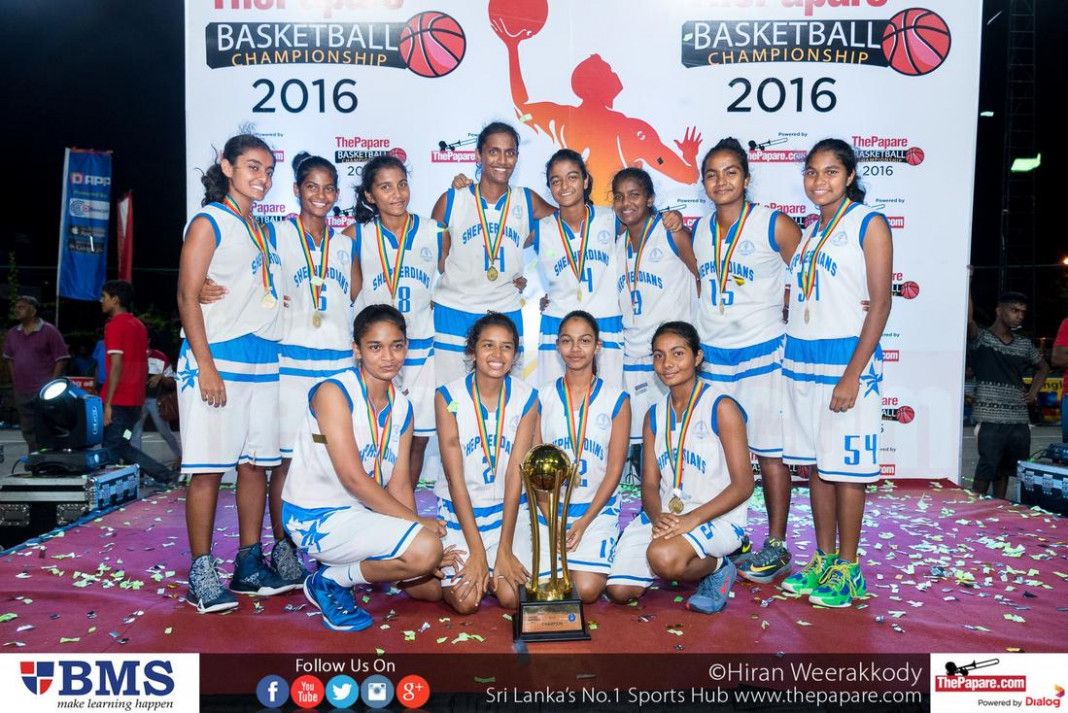 St. Joseph’s Girls’ School won the first possession off the jump ball, but failed to convert any points on the first couple of plays as the Shepherdians held strong on the defense. Nihari Perera started off proceedings for St. Joseph’s by converting a rebound under the basket. Nirma Sasanthi drew first blood for Good Shepherd, cutting through the defense for the layup. Good Shepherd Convent worked the lanes exceptionally well capitalizing on defensive rebounds. Good Shepherd led the first quarter 5-13.

It was a rather unsettling period of play for the two finalists in the second quarter as the two teams scrambled wildly for the basketball. Possession was transferred back and forth due to poor passing and careless dribbling. Both coaches would have been unhappy, owing to the lack of cohesiveness, especially in a game of such high stakes. However, Good Shepherd managed a 7-0 run for almost seven minutes, working the ball on the fast break off Josephian turnovers. The girls from Nugegoda put up a quick 5 points in the last eighty seconds to make up for the shoddy play, as play drew to a close at halftime. Good Shepherd Convent, managed a lead of ten points, with the scoreboard reading, 12-22

The tide seemed to turn for St. Joseph’s College, Nugegoda in the third period as they managed to narrow the deficit. They tightened their zone defense, forcing the Shepherdians to attempt shots from the perimeter; which led to a severe cut in their scoring. On the offense, St. Joseph’s contested more shots than in the first two quarters, by working the ball around well, before lining up to drive at the basket. They finally seemed to be settling into the final. However, it was a nightmare for St. Joseph’s at the free throw line, as the girls missed over 75% of the attempts. The Shepherdians, who were restricted to only 5 points in the third quarter, seemed to be losing the plot for a moment. Nevertheless they still walked out of the quarter leading 23-27.

The two teams indeed put the pedal to the metal in the final ten minutes; in an attempt to secure the title for their respective schools. Good Shepherd dominated the first five minutes of the quarter, securing a 9 point cushion, with the scoreboard reading 28-37. The defending champions, St. Joseph’s proved their worth to the crowd in the last five minutes, securing rebounds and not wasting any time making attempts at the rim. Good Shepherd Convent seemed to struggle on the defense; with one of their key players fouled out early in the quarter. The score was tied 38-38, with 1:45 to go. Good Shepherd were right back in the lead, securing a quick shot, but their opponents tied the game on the next play. Chalani Perera saved the day for St. Joseph’s, scoring a layup off the screen. The game went into overtime, with the tally reading, 40-40.

St. Joseph’s blew a couple of easy attempts to secure a lead early on in the overtime period. The two teams traded points consecutively as the last five minutes slowly drew to a close. Applying tremendous pressure on their counterparts, the girls from Nugegoda secured a 48-47 lead with 20 seconds to go in overtime. St. Joseph’s seemed to have the upper hand for the first time in the game; giving out all that was left in their tanks for their alma mater. As Good Shepherd lined up at the half court line, gaining possession of a timeout call, they clamored to get an attempt at the basket with the game down to the last ten seconds. The ball was passed around the players, owing to the lack of space granted by a solid Josephian man to man defense. It eventually ended up in the hands of Hansini Maleesha, who was left momentarily unguarded at the three point arc.  She beautifully nailed the three pointer, heroically sealing the championship for her school and breaking the hearts of both players and supporters of St. Joseph’s Girls’ School. Maleesha delivered when she was called upon, playing under tremendous pressure, and the rest as they say, is history.

Good Shepherd Convent emerged victorious as champions of the Girls Segment of the ThePapare.com U-19 Basketball Championship 2016, overthrowing the defending champions, 50-48 at the end of overtime.