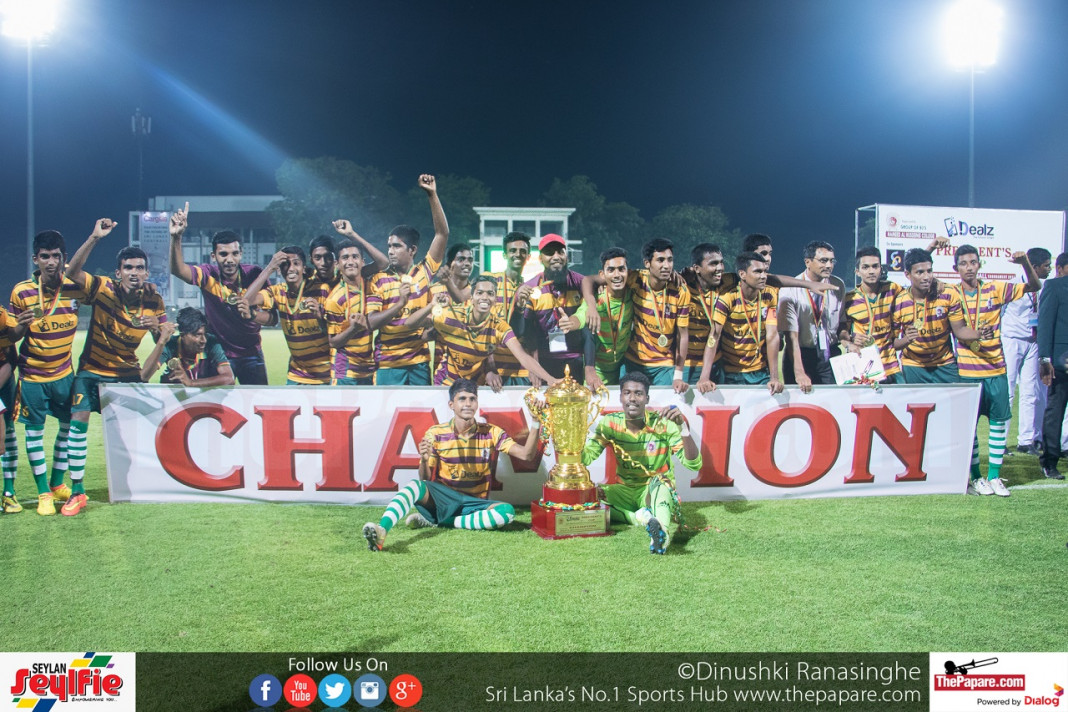 Hameed Al Husseinie were quick to settle down as they ran at their opponents amid a cracking atmosphere as the tournament hosts were backed by a full house.

Their opponents, Maris Stella however didn’t seemed to be fazed by the occasion as they held firm at the back. Mohomed Rishan provided the spark on the right for the Hameedians as he looked menacing every time he darted forward.

There were no clear cut chances in the 1st half despite both teams playing a rich brand of football as both defenses held firm.

After a much needed breather at the end of an enthralling first half, both teams set out quite positively in the second as both sets of offensive players wanted to make amends for a goalless start to the game.

The final few minutes proved to be chaotic as both teams just threw the kitchen sink at their opponents via the long ball. The final whistle stated the imminent as penalties seemed the only way to separate the sides.

Maris Stella stepped forward to take the first penalty as A.S Praveeth faced off against Mahendran Dinesh. Praveeth succumbed to the occasion as his shot flew miles over the target, handing an instant advantage to the Hameedians.

The next 8 penalties were successful for both teams as Hameedian skipper Mohomed Aman stepped out to seal the deal for his team with the tenth penalty of the shootout; the tally stood at 4-4.

However, Mohomed Aman found V. Fernandopulle in goal with a poor effort as Maris Stella were handed a life line by their keeper.

Their joy was short lived howeveras Shane Daberera skied the very next penalty to hand the advantage back to Hameed Al Husseinie.

Afzal Ahamed stepped up for the Hameedians this time around and made no mistake as he buried his penalty in the back of the net, sending the home fans into frenzied celebration.

Speaking to ThePapare.com the coach of Hameed Al Husseinie Mohomed Imran said, “We wanted to win the game during regulation time but they (Maris Stella College) were strong in defense. I wanted my team to attack but once they were in the middle they were cautious because they were conscious about defending their lines which I can understand. I had a lot of faith interms of winning the game be it in normal time or in penalties so I’m happy for my team”

His Excellency President Maithreepala Sirisena was present at the occasion to hand over the winners prizes in front of a packed house at the Race course international stadium. Hameed Al Husseinie swept the boards at the awards ceremony as they bagged all three titles on offer.