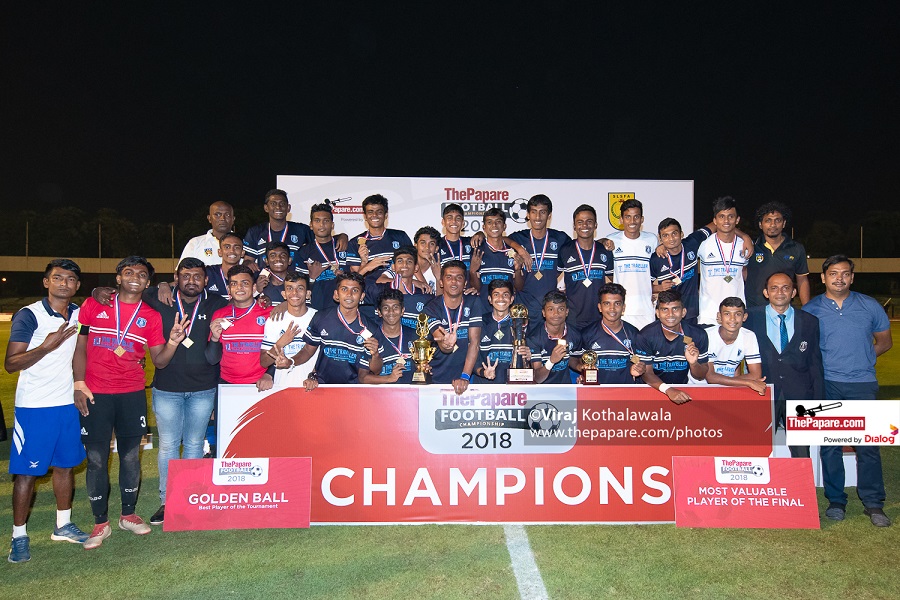 Joes got a chance in the very first minute of the match when Chalana Pramantha took a strike from just inside the box. Goalkeeper Mohamed Safrin just managed to get down in time to make the save at the expense of a corner.

Joes skipper and goalkeeper was then called into action twice in quick succession, first in the 13th minute when he pulled off a stunning save against a powerful strike by Mohamed Sahan and then less than a minute later again when Sahan headed towards goal.

The 18th minute saw brilliance by Shenal Sandesh when he dribbled into the box past 2 defenders but his final effort however went just wide of the post after taking a deflection off a Hameedian defender.

Later on, the Hameedian Captain Aman Faizer, playing his final match for his School, took a powerful strike from outside the box, however Kodikara stepped up yet again and pulled off the save. The Hameedian faithful had come in numbers and were making their voices heard acting as the perfect 12th man.

Joes got their next opportunity when Chamath Rashmitha gave a late cut-back pass which found the onrushing Nimantha Madushan whose effort flew well over the crossbar.

Shenal Sandesh and Mohamed Rishan both had chances for their respective sides towards the end of the half, but both efforts were wasted wide of the target as the teams went into the break goalless.

Mohamed Sahan got the first major opportunity of the 2nd half with a powerful strike which flew just over the crossbar. Skipper Aman followed that with a strike from similar range, but it had a similar result, flying just over.

The Josephians broke the deadlock in incredible fashion when in the 56th minute, a powerful strike by Chamath Rashmitha from the edge of the pitch caught Safrin off his line and crept just under the crossbar to give them the lead.

The goal was followed by some intense play until the Hameedians were handed a lifeline in the 70th minute when the referee pointed to the spot after Mohamed Afkar was cut down inside the opposition box. Hameedia after some premature celebrations converted the penalty through Tuan Nadheer to equalize.

Both sides were given golden opportunities to score the winner towards the end of the game, with the Josephians striking a free-kick from the edge of the box over the crossbar, while Sahan’s attempt from outside the box was tipped over the crossbar by Kodikara as the game went into penalties.

Kodikara pulled off a couple of stunning saves to deny the Hameedians, but the Josephians missed a number of chances to win the game. Goalkeeper Safrin stepped up to keep his team in the shootout in sudden death, but put it over the crossbar, crowning St. Joseph’s College as the first ever Champions of ThePapare Football Championship.