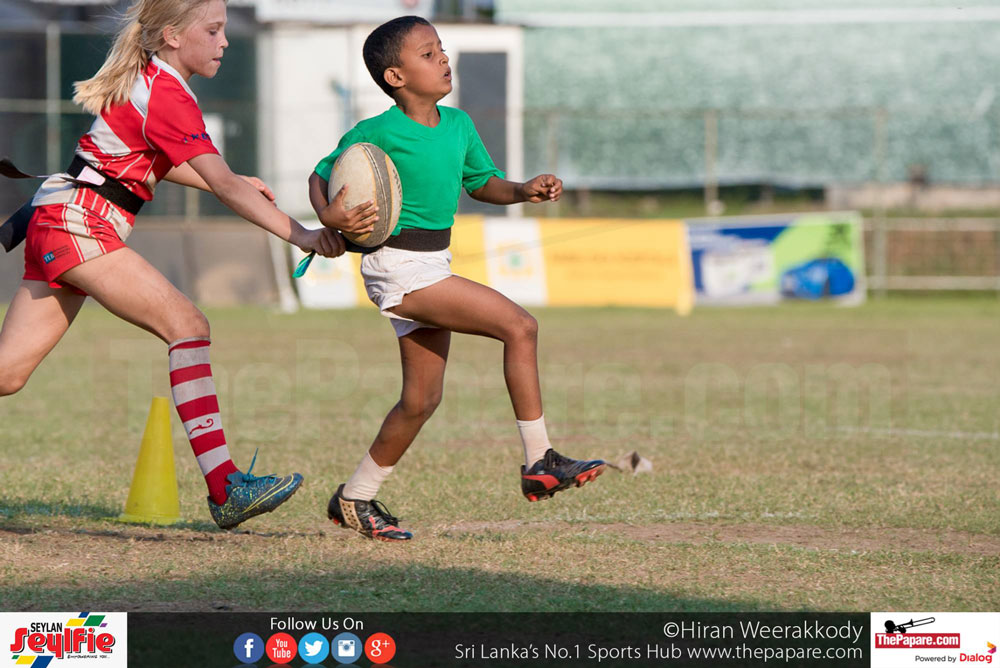 At 10pm on Sunday evening, at The Colombo Racecourse Ground, the curtain came down on the 2017 Sri Lanka Super 7’s powered by Dialog and so ended the glitz and the glamour of Sri Lanka Rugby’s flagship event.

The organisers should be congratulated for producing such a spectacular occasion that left smiles on everyone’s faces. Fireworks and loud music, dancing girls and flashing lights, sparkling skills shown by rugby stars both young and not so young – the event had something for everyone.

The smiles on the franchise player’s faces marked the end of a gruelling couple of weeks where mind and muscle where forced beyond the limits of mere mortals to a place where battered and bruised sports professionals go to find pain. It sounds dramatic but it was not as dramatic as the sounds that were made when a Nigerian runs into a Fijian or a Samoan runs into a Sri Lankan. The contact in the tackles and at the breakdown was breath taking and I’m pleased to note that often it was the local Sri Lankan stars putting in the big hits.

We know that Sri Lankan National teams have had the opportunity to work with New Zealander Nick Groube on their Strength and Conditioning. And Peter Woods, the Sri Lankan National 7’s coach, is on record stating that the physical testing results of the National 7’s squad is showing huge improvements with players getting nearer to where they need to be to compete on the international stage. But to actually see players going head to head in a physical contest with Olympic and World Series players can only be encouraging for our rugby faithful.

Another hugely positive part of the weekend was seeing the local U16 school’s teams showing that the future of Sri Lanka 7’s has a stockpile of up and coming talent that we need to nurture. Unfortunately these young boys do not get to play enough rugby against each other with this being the only tournament for the U16’s 7’s teams all year. Why can’t we have more tournaments spread over the preceding weeks for both the U16 and U18 age groups with the final weekend dovetailing with the Sri Lankan Super 7’s.

Some say it is too much rugby for boys who have school examinations. I can tell you that schoolboys in the powerhouses of world rugby also have scholastic study and there are some who also say regular exercise helps the mind to function better. Obviously study and rugby can live side by side just ask the Rhodes Scholar and 1987 World Cup winning All Black Captain, David Kirk, if rugby and study are possible. And he played in a time of amateurs, when rugby was played for the love of rugby, and no one received money to play.

Our rugby administrators have openly stated that they want Sri Lanka in the top 20 in World Rugby 7’s and we know that we need to invest in the future players as well as the current crop of National stars. I believe the goal should be to compete at the Olympics as well as in the IRB World Series. That will only happen if we can nurture our youth, if we can have them playing in more tournaments, if we can have rugby players dreaming to playing rugby on a world stage for Sri Lanka.

From the sidelines by Paul Michael Toia

There are other nations in our region and also around the world who dream these dreams of being a top 20 team. They are investing money in their youth programs that sees talent identification and development programs give the young players from Chile and Russia, Malaysia and Hong Kong to name a few. Their U16 and U18 squads regularly play in international tournaments to prepare them for their possible future. While our U16 and U18 squads play in one two day tournament a year. Those National Unions are investing money into the grassroots of local rugby and at International tournaments they are competitive. After seeing the lavish Sri Lanka Super 7’s it is difficult for anyone to say there is no money in the Sri Lankan Community. Please let some of the money trickle down to the future of Sri Lankan rugby and nurture growth in our grassroots.

And while our rugby administrators have the coffers open can we please spend some money on improving the consistency of the referees. Some decisions were baffling in the Super 7’s tournament but none more so than the fact that we had Charlie Brown, International Referee from Singapore, as a referee’s assistant during the final instead of controlling the game from the middle.

All those that attended the Sri Lankan Super 7’s will agree it is a stunning success but it is only the start, Sri Lankan rugby has too much talent for the rugby public not to want more success. The good thing is that we all want the same thing – constant improvement of Sri Lankan Rugby and maybe our National 7’s team playing in the World Series, the Olympics and becoming a top 20 rugby nation.