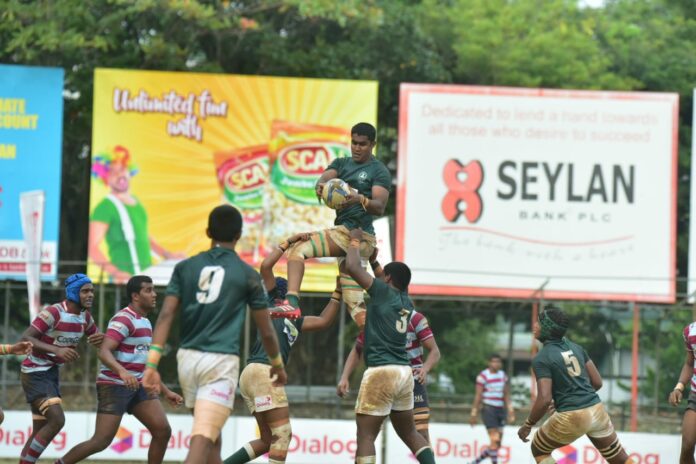 The unbeaten League champs Isipathana College took on Dharmaraja College in the 1st Quarter-final of the Dialog Schools Rugby  Knockout Tournament 2022, better known as the President’s Trophy. The lads from Havelock Park managed to walk out with a comfortable 38 points to 06 win over the Rajans to book their spot in the final 4 of the tournament.

Isipathana started off strongly with an aggressive passage of play as they pushed the Rajans into the back foot from the word go. Rinesh Silva went over the line inside the first 10 minutes to begin the scoring for the day, which was successfully converted by Malith Mihisara. A few minutes later, Dharmaraja College started scoring thanks to a 3 pointer by D. M. Sasanka through a penalty.

Isipathana restarted with intent once again as the action was mostly played on the 22m line of the Rajans. Green Machine found the white wash for the 2nd time in the game through a rolling maul from a 5m line out, which the Rajans had no answer to. Soorya Dodangoda was the try-scorer, while the conversion was unsuccessful.

Isipathana went over for a 3rd try from the restart of the game thanks to a brilliant run by the stand in Skipper Praveen Stefan, who found a huge gap in the middle of the field and then carried the ball for a good 30-40m. Wewalpandith and Kodagoda joined the party from that moment to carry the ball forward, and as soon as they came near the 5m mark, Isipathana decided to use the width of the field and the numbers they had to carve out a clear path for Mihisara to go over the line. Mihisara converted the try himself as the scoreline read 19-03.

Soon after the 3rd try, the Rajans finally started to show some fightback with some good aggressive running, but unfortunately for them, they lost possession whenever they came close towards the try line. However, just before the half time whistle, the Rajans received a penalty which Saumya Wijesiri kicked in between the posts successfully to make it 19-06 at lemons.

The second half began with Isipathana opting to make a lot of changes. Tharindu Wewalpandith was replaced, giving the big number number 7 a deserving time off. Just in the 5th minute of the second half, Naveen Kanishka provided acting Skipper Stefan with a beautiful long pass which gave him more than enough space to go over the line easily. Mihisara converted the try as the lead grew to 23 points for the League champs.

With the 4th try, Isipathana made more changes as they opted to give some match time to all the players of their bench, giving the senior players like Venura Kodagoda, Naveen Kanishka, Rinesh Silva, Praveen Stefan etc. some breathing space after a job well done. However, with the arrival of fresh legs, things went from bad to worse for the Rajans.

The Green Machine continued to pile up the tries with the newcomers as they made use of a scrum from the opposition’s 5m line. De Costa got the bowl out from the scrum and passed it to  Zumri Ibrahim, who pulled off a stunning exchange to Mesaada Rashminda who went over for a try under the posts, which Botheju converted as the score moved to 33-06.

It is fair to say that Isipathana saved the best for last as their 6th try deserved all the credit in the world. Rashminda, who received the ball 60m away from the try line, used the width of the field which was available to his advantage and went all the way by kicking and chasing not just one, but two chip kicks. His precision with the kicks and the speed to outrun the Rajans on both the occasions was simply phenomenal, as the 18-year-old who came out to play during just the final 20 minutes of the game ended up with 2 tries.

When the final whistle blew, Isipathana, who completely dominated the visitors from  Kandy, won with a scoreline of 38-06. Now Isipathana will face the winners of quarter-final 2,  S. Thomas’ College, who defeated the giant killers of the League Vidyartha College 35 – 19  at Havelock Park.  This will be a fresh match-up which we did not get to see during the League, and a fitting one to be the semi-final of the Dialog Schools Rugby Knockout Tournament.