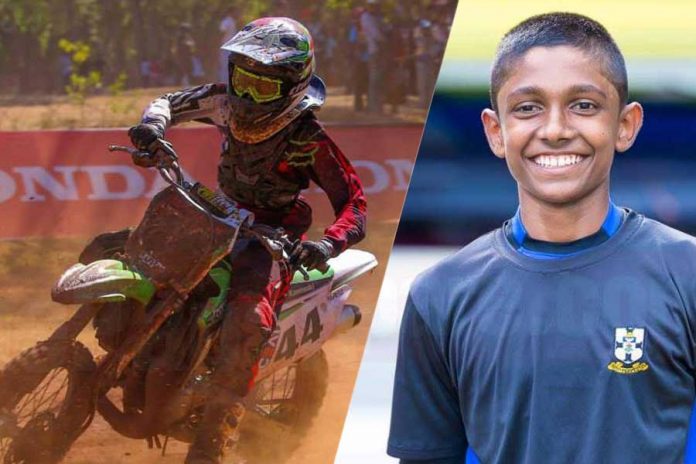 S.Thomas College Mount Lavinia, the school by the sea is an institution which routinely encourages its students to take part in multiple sports disciplines and it is not rare to find students who excel in more than one sport.


The protagonist of our story Bhanuka Rathnayake, a student of S.Thomas, has also exceeded in two sporting disciplines; rowing and motor racing. 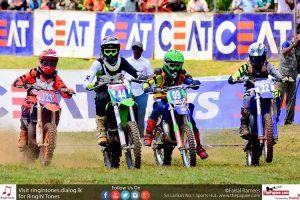 Bhanuka’s unique love is motocross racing.  He caught the bug of racing at a very young age when he trotted around with his dad Jayantha Rathnayake who is a keen fan of the sport, to the popular racing events all around the country. Bhanuka immediately fell in love with the thrill of riding and urged his parents to buy him a bike so he could race. Bhanuka’s dream of riding a bike became a reality when the current National Motorcross Champion Ishan Dassanayke’s father, following the youngster’s insistence, gifted him a bike.

“It was ‘Dasse Aiya’ (Ishan’s Father) who gave Bhanuka his first bike. Bhanuka had been pestering me to buy him a bike after the races. Ishan was then riding in the Under 16 and our families were friends and we used to visit Ishan’s home after races in Kurunegala. One such time Ishan’s father decided that we shouldn’t disappoint the youngster who was so keen on riding and gifted Bhanuka with his first bike which was a Honda CRM 50.” said Bhanuka’s father Jayantha relating an exceptional connection in the field of motor racing. 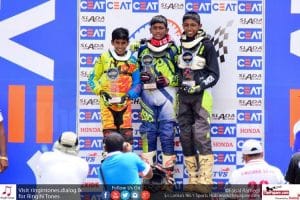 Bhanuka took part in his first race when he was just 9 years. He skipped a level as he did not participate in the ‘PW’ event, but straight away competed in the 85cc event with the much older folk. It was not easy going for the rookie as he had to battle with some of the biggest names in motorcross. Bhanuka went without a podium finish for two and a half years as he was a young contestant in the age category and struggled to match up to the much older and experienced riders. However, the young rider had the courage and determination to pursue the matter and the unwavering blessing and support of his parents who backed his love for motorcross.

Young Rathnayake’s first podium finish came in the year 2013 at Vijayabahu Supercross in Boyagane. Bhanuka finished third on a track which many of the riders consider to be the most demanding and technical motorcross track of the country. As a rider who had been eager for a podium finish for more than two years, he was not about to let go of any opportunity, managing the tremendous feat of finishing on the podium in 36 back to back races which included 9 first-place finishes. This was a remarkable feat by the youngster in a sport where consistency is difficult with so many moving parts determining the outcome of a race. 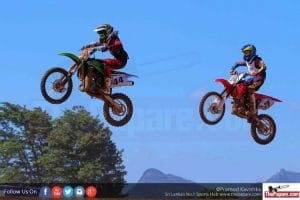 Bhanuka’s first mentor in motor racing was Haren Yatawaka who taught Bhanuka the A’s and B’s of racing at the Hanwella racing track. He also received valuable technical guidance from Indika Gurusinghe, a past rider himself and the father of Evon Gurusinghe, a leading young rider in the current Sri Lankan circuit. Another past rider, Dinesh Anurudha is the person who was in charge of fine tuning Bhanuka’s bike until recently, while the responsibility now lies with Sangeeth Suriyage after Bhanuka joined the Hellibees racing team. The twist in this story is the apparent support that the riding community seems to have for one another.

Although a fearless rider in the gravel, Bhanuka cuts a contrasting character in school. He does not like the spotlight much and is a reserved character.  Bhanuka like all Sri Lankan youngsters, was first drawn to cricket but gave that up and tried his luck with the Oval ball. In the Rugby field, he was a winger due to the speed he possessed. But he claims that he wanted to be in the thick of things and as ‘wingers’ sometimes don’t see much ball, made the switch. “Rugby is also a sport with a lot of injuries as is motorcross but my parents were also happy that I didn’t want to pursue Rugby” said Bhanuka about giving up the rugby dream. 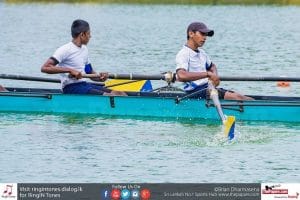 Jayantha who is an old Royalist, is the one who encouraged his son to take-on the sport of rowing as he thought it would complement his riding. Having taken-up the sport at the age of 14 in grade 8, he competed in the School’s nationals in the sculls and the doubles in the under 14 age categories and won it, which encouraged him immensely. “After taking part in my first rowing event, I immediately liked the sport “ Bhanuka took part in his first regatta against Royal college this year in the Under 16 fours event and had to end up on the losing side with the Royalists arriving at the finish-line first. “Regatta is a special feeling it’s not like any other rowing competition”

Known mostly by his peers at school as a Motor racer than an oarsman, we asked Bhanuka in which sport he feels the most pressure. ”I think it’s before a motor racing event I have the most pressure. In a rowing meet I have my team mates whom I prepare with but before a race the preparation is alone”.

The young rider had a great year in 2017, becoming the Under 16 Champion at the Sri Lanka Super Series organized by Sri Lanka Automobile Riders and Drivers Association (SLARDAR) and also managed to become the Under 16 first runner up in the national championship. 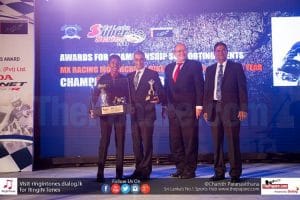 Having ridden his final season in the Under 16 category, Bhanuka now steps into the big league entering the MX 250 cc open category. The young rider will be rubbing shoulders with the likes of Ishan Dassanayake, Gayan Sandaruwan, Evon Gurusinghe and Buddika Kasun in the competitions and his composure will be put to test against the racing giants. Bhanuka’s father who is his biggest supporter, has made sure that his son has the best chance of competing with the big names having brought down the latest Kawasaki KXF 250cc 2018 model for Bhanuka for the upcoming season. “It is not going to be easy competing with the big names and some of my idols, but I am determined to give them a good fight. My target is to make sure that I finish within the first 5 in the competitions and if I can get a podium finish, that will be amazing” added young Bhanuka Ratnayake who thrives to do well in both in the gravel and water.