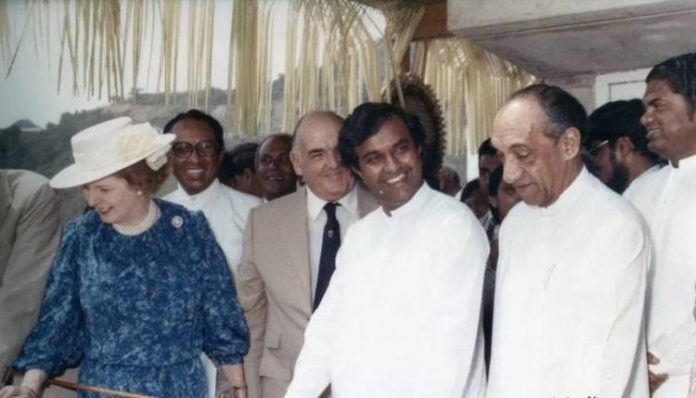 The 26th death anniversary of Gamini Dissanayake fell last week. His untimely death at the prime age of 52 was a bitter blow for cricket and to a large extent the country as a whole. We dedicate today’s column to profiling the man who changed the nation’s cricket fortunes.

Gamini became an MP at the age of 28 in 1970. When J.R. Jayewardene’s government won a landslide victory in the next general election in 1977, he became a prominent Cabinet Minister aged just 35! Gamini was an ambitious man. He was in-charge of the accelerated Mahaweli Development Project and on top of it also had the Land Ministry.

As T.B. Werapitiya’s term as President of Board of Control for Cricket was nearing, the stakeholders of the sport wanted a vibrant leader to head the board. Werapitiya was a politician so they were on the watch out for another politician who had made an impact since JR’s government took over. The names of Gamini Dissanayake, Lalith Athulathmudali and Ranasinghe Premadasa were discussed. Premadasa was left out because he was more football oriented. Then, Gamini was preferred over Lalith mainly because of one reason – he happened to be the neighbour of Abu Fuard, a former off-spinner and a key figure in cricket circles.

Initially, Gamini turned down the offer. His reluctance was that he had too much to chew and very little time to dedicate. Then cricket’s stakeholders went and met his boss – President Jayawardene.

JR had captained Royal College in the Bradby Shield and had represented the cricket team in the Royal – Thomian. Cricket was his first love. He had been a former President of the Board of Control himself. So, he convinced Gamini to add one more feather to his cap.

It’s no secret that Sri Lanka’s attempts in gaining Test status had been repeatedly shot down with the founding members – England and Australia exercising their veto power.

Why Gamini was successful in his very first attempt was that he came up with a professional bid when he attended the ICC meeting that gave us Test status in 1981. Obviously, there was backing from India and Pakistan, who proposed and seconded our bid. This time there was backing from Australia as Fred Bennet, one of their prominent cricket figures had arrived in Sri Lanka to assess our proposal and he supported it. Having Australia’s backing was a major plus point in Sri Lanka’s bid being successful. It was a master plan by Gamini.

England did not object when a vote was taken for the bid. Gamini had scored his first major victory for cricket in Sri Lanka. He was the cynosure of all eyes. Every leader had his favourite disciple. For JR it was Gamini. ‘He is a go-getter. He is meticulous but also can be ruthless if things don’t fall in line. I wish we had more men who passionately felt for their people,” the old fox once said of Gamini.

A politician it is said very rarely finds smooth sailing in his career. Gamini had pulled off the greatest victory for cricket off the field and within months he would meet a storm – the rebel tour to South Africa.

When the board met to discuss sanctions for those who had engaged in rebel tours, some experienced cricket administrators briefed Gamini about the penalties other boards had issued. England for example had banned Graham Gooch’s rebels for three years. So they wanted Gamini to follow suit. ‘Three years, no way. They will be banned for 25 years,” Gamini put down his foot. He was bitter about the rebel tour. It took him a long time to forgive the perpetrators who harmed the game’s progress.

None, in cricket circles, dared to cross his path again. Such decisiveness and single-mindedness was something that the UNP leadership has lacked over the years and that’s the reason why they have been politically doomed in the last quarter century.

Gamini cared deeply for his players. Arjuna Ranatunga told our Legends segment that the Board Chairman treated him like his own son. ‘He spent more time with me than he spent time with Mayantha (Gamini’s younger son). Arjuna missed a Lord’s hundred in 1984 narrowly. He was inconsolable in the dressing room. Suddenly, there was a pat on the back. Arjuna turned and watched. There were tear drops in Gamini’s eyes too. No matter how strong willed politician he was, at times the emotions got the better of him.

Business Tycoon Abdul Rahman Bukathir, another pioneer in the sport having brought the game of cricket to the gulf region bears witness to Gamini’s deep care for his players.

Bukathir, who conducted biannual cricket tournaments in his Sharjah Cricket Stadium told The Island newspaper how Gamini once called him and inquired about the pocket money his players would get during the tour. No cricket board President had until then given attention to such minute detail. The Sri Lankan cricket chief would want US$ 50 per day for each player for food. Bukathir would agree. He would then explore whether there was any provision to get players a further US$ 25 for laundry. This time Bukathir would reluctantly agree. Then Gamni would negotiate again for a further US$ 25 as taxi fares. Not knowing what else Gamini had in mind, Bukathir would offer a deal.

“I am prepared to pay each of your players a per-diem of US$ 100 per day. Nothing more. But do one thing, don’t tell about this to anyone.”

That is all what Gamini could ask for. Basically for a three week tour each player would walk away with more than US$ 2000. In the days before the game had become professional, this was huge for the players. And Gamini was a godsend for them.

The Asia Cup was successfully conducted in Colombo in 1985. Ceylon Tobacco had come forward as the sponsor. There had been murmurs of poor umpiring in Sri Lanka and that local umpires were not up to scratch. Gamini then brought down the world’s best umpires to officiate in the games – Dickie Bird and David Shepherd. Problem solved. Many years later, neutral umpires would become the norm of the day. Here was a man who was ahead of his times.

Just a few were fit to hold a candle to Gamini when it came to his oratory skills. Sidath Wettimuny recalled in our Legends segment the impact of a speech that Gamini gave when Sri Lanka played their first Test match in England in 1984. Gamini’s English counterpart’s speech followed soon after and he started off by saying, ‘Following Gamini Dissanayake is such a hard act.’

Soon Gamini realized that cricketing talent was only emerging from Colombo and Kandy at that point. He felt the need to take the game to grass root levels. Steps were taken to expand the sport to rural areas and more schools started engaging in the sport.

Another huge contribution of his was the formation of the Asian Cricket Council. This body was instrumental in shifting cricket’s power base from England and Australia. Gamini together with Air Marshall Nur Khan of Pakistan and N.K.P. Salve of India did the ground work for the formation of this body that has today become a strong force. He was the first Vice-President of ACC with Salve being the President.

Cricket’s iconic cheer leader Percy Abeysekara has spared none. Gamini was no exception. Gamini had once said, ‘Percy, why don’t you join the cricket board.’ Percy had replied, ‘Sir, there are three palanas I don’t like. One is Deshapalana. Second is Cricket Palana and the third is Upath Palana.’ Gamini loved a laugh. A few years later, Gamini would offer Percy a job at the cricket board again. This time too Percy turned down the offer saying, ‘Sir, I would rather be on the foot board than the cricket board.’ Gamini loved Percy. Don’t we all.

He served the Cricket Board for eight years at a stretch. His falling out with President Premadasa saw him quitting cricket and dedicating more time for politics as a firebrand of the opposition. Then in 1994, he returned to govern cricket on the request of some of the senior players.

Veteran cricket administrator Nuzki Mohammad served Gamini as the Treasurer of the Cricket Board. When he became the leader of UNP in 1994 and contested the Presidential election later that year, Nuzki warned him to take care of himself.

“I told him once to wear a bullet proof jacket when he is addressing his political rallies,” Nuzki recalled.

“He told me something interesting. ‘You see Nuzki, can you ask Aravinda to wear all these protective equipment and go and bat. You can’t do it men. I want to be comfortable when I am addressing a rally, able to move my fist and stuff.’.

Gamini was assassinated while addressing a political rally at Thotalanga. The Sri Lankan cricket team was in Zimbabwe at that point. A late night phone call from Colombo alerted the team of the tragedy. None of the boys slept from that point on.

May he attain the supreme bliss of nibbana.