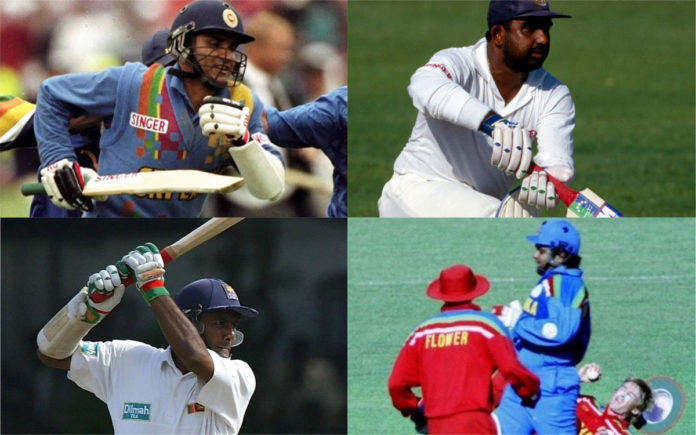 If you were asked to pick the 10 most memorable innings by a Sri Lankan in ODI Cricket, what would your choices be?

Most probably you would go for World Cup innings or the clearest in your memory, where more often than not the most recent incidences are deemed the most memorable ones (recency bias). In the poll “Sri Lanka’s Greatest ODI innings” conducted by ThePapare.com, this trend was clearly shown as many great innings from the 90s were eliminated from the race in just the first round (round of 32) So, we decided to refresh your memory with these ‘Golden Oldies’ played in the 1990s. 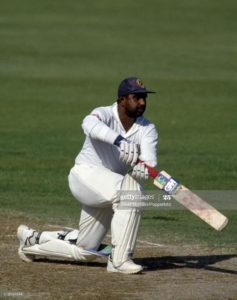 The perfect anchor, this is what comes to mind when you hear the name Asanka Gurusinha. Although he is famous for his pivotal role in the 1996 World Cup campaign, this is one of the memorable innings of Gurusinha which unfortunately was in a losing cause.

In the 1994 Pepsi Austral-Asia Cup, Sri Lanka had to win their 2nd group match against New Zealand if they were to make the semifinal of the tournament after suffering a hammering at the hands of the Australians in the 1st game. Sri Lanka skipper Roshan Mahanama invited the New Zealanders to bat first at the Sharjah Cricket Stadium and the Gavin Larsen led Kiwis set a target of 218.

Sri Lanka lost 4 wickets for 41, then were reduced to 7/152 but Gurusinha steadied the ship with a calm century when the next best score in the team was 26. Needing 16 to win in seamer Dion Nash’s final over, Gurusinha could only steal 13 runs. Sri Lanka needed 10-runs from Dion Nash’s last two-balls but Asanka Gurusinha, who had made a heroic century, hit the 5th ball for six but then could make only a single instead of the four Sri Lanka wanted off the last delivery.

Read: The best of Sanath Jayasuriya

Tired and devastated, Gurusinha was cheered all the way to pavilion by the Sharjah crowd and the New Zealand players as he was awarded the Player of the Match award. He also became the first Sri Lankan to score a century (118*) in the historic Sharjah ground. 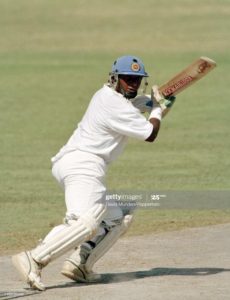 In the 1st ODI of the 1992 Australia tour of Sri Lanka, the hosts chased down Australia’s 247 in 49.2 overs thanks to an exuberant century by Aravinda de Silva.

Sri Lanka were on a 14-match losing streak to Australia and this innings turned the fortunes around for Sri Lanka as they went on to win the series.

This win was also important for Sri Lanka Cricket as it marked the return of international cricket in the country after a lapse of five years and the islanders celebrated it with a thrilling four wicket win. 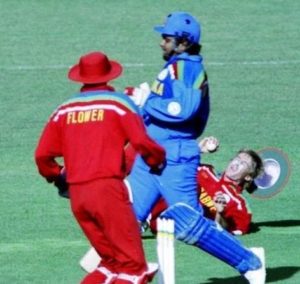 Once upon a time, a few tasks in sports were considered unimaginable, like the 10sec 100m, 4-minute mile or the 2-hour marathon. In cricket, breaching 300 runs in the second innings of an ODI was recognized as such. Before 1992, in the ODI cricket history which spanned 21 years and 715 ODIs, no team was able to achieve this milestone.

In the 1992 Sri Lanka vs Zimbabwe World Cup game, the islanders successfully chased down 312, becoming the first team to do so. After Andy Flower and Andy Waller hammered the Lankans to all parts of the Pukekura Park, Athula Samarasekara and Roshan Mahanama provided Sri Lanka with the perfect start opening the innings with a rapid 128-run partnership. But after their dismissals, Sri Lanka had a mini collapse and were reduced to 167/4.

Read: The best of Mahela Jayawardene

From then on, Arjuna Ranatunga took the responsibility of the chase and carried Sri Lanka over the line with 4 balls remaining. He basically puppeteered the fielders behind the wicket from square leg to point with the delicate touches which he is known for. His 61-ball 88 included with 9 fours and a six as he also took Sri Lanka to their first ever 300+ score in an ODI. 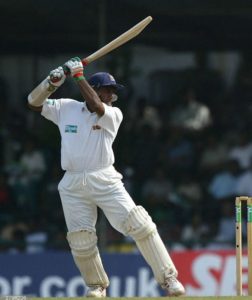 After 1992, the Cricket world had to wait another 3 years to see a 300+ 2nd innings score in an ODI and once again, Sri Lanka were the chasers; this time ending on the losing side.

After a massacre by Brian Lara who guided West Indies to 333 with a magnificent 169 off 129 balls, the Sri Lankans collapsed to 5-103 in the group stage game in the Singer Champions Trophy at Sharjah.

No. 07 batter Hashan Tillakaratne almost carried Sri Lanka over line with a brilliant run-a-ball century, becoming the first batsman to score a century at that position in an ODI. 78 runs from his century came through running as Tillakaratne toiled hard in the middle to take Sri Lanka to victory, but failed in the last over where he had to make 8 runs.

Tillakaratne got caught at deep square leg while trying to clear the boundary but the legitimacy of the catch by Stuart Williams was debatable with some camera angles showing he may have touched the boundary line. Sri Lanka lost the game by 4 runs. 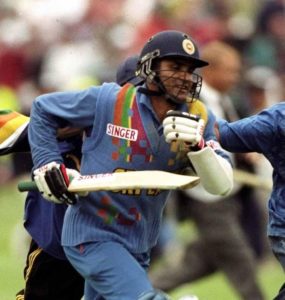 In the final of the Emirates Triangular Tournament 1998, Sri Lanka chased down 257 at Lord’s against England to record their first ever win at the historic cricket ground.

Sri Lanka’s number 03 batsmen, Marvan Atapattu launched a marathon batting effort to become the first ODI centurion for Sri Lanka at the home of cricket, anchoring the innings with classy 132 runs. The innings was decorated with 14 boundaries.

This innings also confirmed Sri Lanka’s first victory against England in England. Atapattu’s innings still lies as the highest score at Lord’s by an Asian batsman in an ODI.