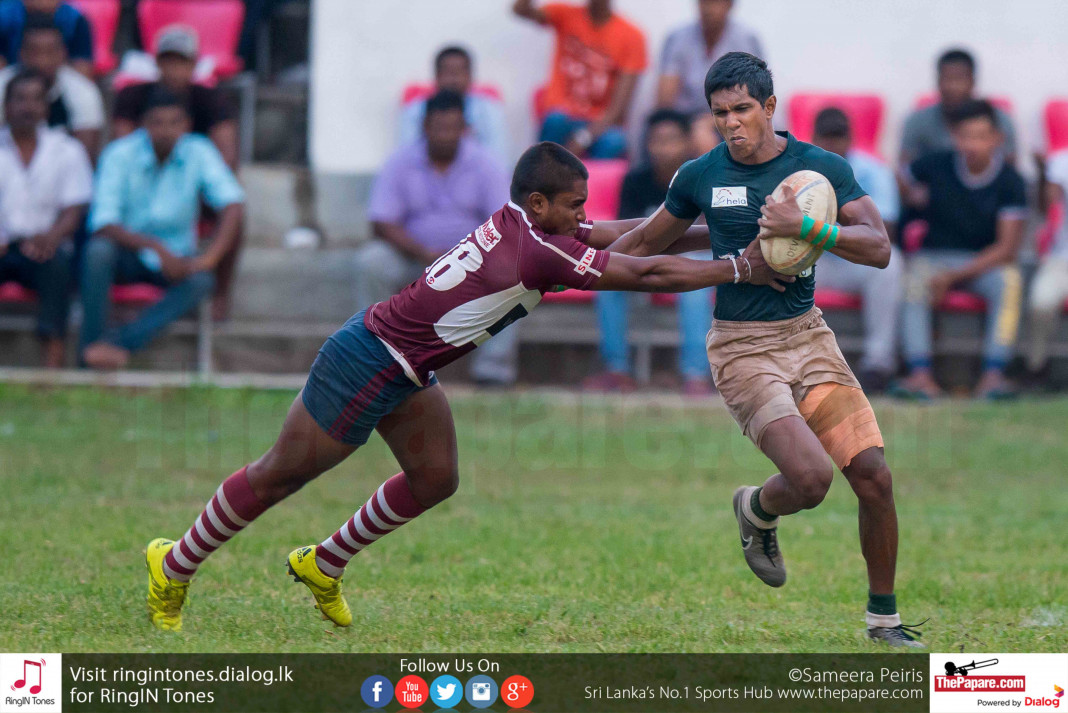 The two unbeaten teams in Group 1B faced off at yesterday as Isipathana College hosted Science College at Havelock Park in what turned out to be an absolute thriller. By the end of an enthralling 80 minutes of Rugby, the Green Machine prevailed by 29 points (3 Goals, 1 Try and a penalty to 23 (1 Goal, 2 Try, 2Penalties) thus also maintaining their unbeaten tag this season and securing pole position in their group

Science college got things underway attacking the club house end were noticed by their opponents that running through them was not going to be their rout one option as the Greens dished out some effective tackling to keep the speedy Science College players at bay.

The early pressure by the hosts began to tell as Isipathana received possession several times from turnovers and infringements but were let down by their own handling errors. However 15 minutes into the game the deadlock was broken as Chamodh Fernando finished off a fine back division move and scored near the left corner flag. Full Back Gayan Wickramarathne made no mistake with the conversion despite the acute angle (IC 07 – SC 00). 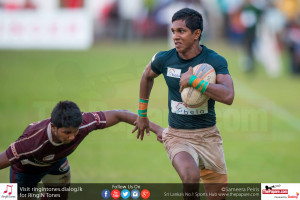 The Isipathana forwards were slowly settling into their rhythm and despite being small made in comparison to their opposition were dismantling the Science 8 in almost all aspects of the game during the first 30 minutes. There was no respite for the visitors as Isipathana doubled their lead with an amazing team try in the 25th minute. Kushan Indunil received the ball off a 22 meter scrum and sent Sumudu Rankothge through center of the pitch with a lovely inside ball. Sumudu in return drew the Science full back before popping a pass to the omnipresent No.08 Wageesha Weerasinghe who dived over under the posts. Wickramaraththne converted and Isipathana led 14nil.

Things only got  worse as another Sumudu Rankothge break saw Scrum half Harith Bandara receiving possession and weaving his way to score besides the posts. (IC 21- SC 00). 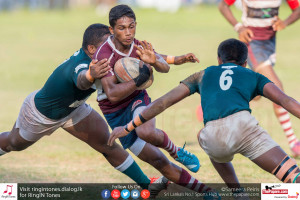 After 30 minutes Science College showed signs of settling down and got about their business immediately. Science got a few phases going on and their efforts bore fruit instantly. Fly half Vibuda Sahan put over a strait forward penalty. A few minutes later Science college reduced the deficit even further when little winger Tharnidu Maduranga fell over for an unconverted try (IC 28- SC 08).

Within a space of a few minutes Science College were right back in the game as Referee Rohan Fernando signaled for half-time.

The resumption of the 2nd session saw Isipathana making a sweeping move into opposition territory right off the kick & and were on their way to score another try with Sumudu Anuradha breezing past the Science defense and having support at hand. However little Maduranga who was having a fine game himself intercepted his pass and scampered through the next 60 meters to touch down under the posts for Science College. Vibuda Sahan put over the extras and Isipathana were now under pressure right from the start of the 2nd half (IC 21 – SC 15) 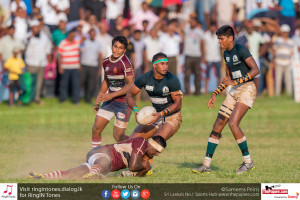 However to their credit the Kushan Indunil and his team managed the situation quite well and there was no scoring  done for the next 15 minutes with both teams trying to wrestle back the initiative. A wayward clearance kick by Science full- back Dilshan across the field found only the wanting hands of Chamodh Fernando. The fleeted-footed winger went solo and using his dancing, stepping skills weaved his way to score besides corner flag. Gayan’s conversion attempt lacked the distance.

The visitors though kept themselves in the contest with Sahan slotting over a 3 pointer from close range. Five minutes hence burly Charith Janitha managed to ground the ball over the try line. The conversion was missed but the game was in the balance.

A remarkable Science comeback was however not to be as Isipathana went on to dominate the remaining few minutes. The hosts came close on two occasions to seal the game with a try but Science held on. During the dying stages Full Back Gayan Wickramarathne fired across a penalty just to add some distance between the two teams just before the full time whistle.

The win ensured Isipathana, pole position in the group while Science end their group fixtures in 2nd place. Isipathana will take a lot of satisfaction from this win as they look forward for even tougher opposition in round 2. For the winners almost al of their players chipped in with some fine performances but Vageesha Weerasinghe stood a cut above the rest. Despite his small build for a No.08 he led his fellow forwards throughout the game while showing off his amazing work rate.

There were some unruly scenes after the game concluded as a number of fans surrounded the referee unhappy with his descions during the game. He was escorted out of the playing area with much difficulty by security.