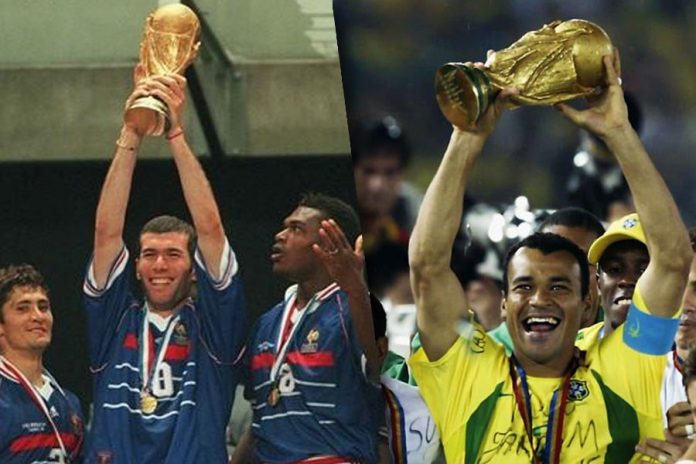 Mexico 86 became Maradona’s tournament as the Argentine genius netted five goals while creating another five for his team en route to victory.

The previous article was a voyage through three World..

West Germany avenged for their defeats in 1986, winning their third title in 1990 by beating the defending champions Argentina in an ill-tempered final. In 1994, Brazil tasted victory after 24 years under the captaincy of Dunga, beating Italy in a penalty shootout.

Hosted by France, the 1998 edition was mostly famous for its theme song, the ‘Cup of Life’ by Ricky Martin that eventually became one of the greatest sporting anthems of all time.

The group stage was filled with shocks and surprises. Defending champions Brazil opened their campaign with wins over Scotland and Morocco but they were surprisingly defeated 2-1 by Norway.

Leading through a goal in the 78th minute, Brazil were heading for a certain win but Norway stormed with two late goals to stage one of the most memorable comebacks in World Cup history.

The hosts topped their group with commanding wins against South Africa (3-0), Saudi Arabia (4-0) and Denmark (2-1). In group D, Nigeria caused a major upset by beating Spain 3-2 and eventually topping the group. Spain failed to qualify to the knockout despite thumping Bulgaria 6-1.

Romania did a similar feat by beating England 2-1 and topping their respective group. Argentina qualified with a game to spare as they beat Japan and Jamaica with Gabriel Batistuta scoring in both games. His hat-trick against Jamaica made Batistuta the only person to score hat-tricks in consecutive World Cups.

Newcomers Croatia gained the second place in their group mainly due to the heroics of Davor Suker. At Lyon, teams of USA and Iran posed for a joint photograph before their group game, an iconic image, given the political tensions between the two nations.

The round of 16 saw a classic between Argentina and England. After Batistuta and Alan Shearer scoring through two penalties, stepped up young Michael Owen in the 16th minute to score an excellent goal with a wonderful solo run.

But Argentina’s experience narrated its own tale, when Javier Zanetti scored through a well mastered set piece following a free kick, leveling the scores just before half time. The turning point of the game occurred when David Beckham was red carded on retaliation for a foul by Argentine skipper Diego Simeone.

The scores, deadlocked after 120 minutes, saw a penalty shootout which was eventually won 4-3 by Argentina. Goalkeeper Carlos Roa became the hero at Saint-Etienne.

The quarterfinals featured another penalty shootout between France and Italy. After a goalless draw, the game proceeded to penalties. Yet again, the Italians were undone, similar to the 1994 finals.

Brazil overcame Denmark 3-2 in a close game at Nantes. Martin Jorgensen opened the scoring in the 2nd minute of the match, soon to be equalized by Bebeto in the 11th minute. After Rivaldo made it 2-1 to take the lead for Brazil at the half, Brian Laudrup made it 2-2 in the 50th minute. Rivaldo scored his brace 10 minutes later, to take a marginal 3-2 lead, which they sustained until fulltime.

A moment of brilliance by Dennis Bergkamp was needed to end Argentina’s terrific run, as the striker’s late goal sealed a 2-1 win for Netherlands at Marseille.

The surprise package, debutants Croatia beat Germany 3-0 to qualify for the semi-finals. Later they won the third place, the best performance by a team appearing for the first time in a World Cup.

During the semi-finals, Brazil overpowered Netherlands 4-2 in a penalty shootout after scores were leveled at 1-1. They were to meet France, who ended Croatia’s dream run with a 2-1 win.

The Brazilians came in as favourites to win consecutive titles, against the hosts France. The pre-match build-up was dominated by the omission of Brazilian striker Ronaldo from the starting lineup, only to be reinstated 45 minutes before kick-off.

The final, however was dominated by France, winning 3-0 against a formidable Brazilian line up. Zidane scored two similar goals with headers, while Emmanuel Petit put the icing on the cake for the delighted home crowd at Stade de France.

The French reveled their maiden World Cup title as celebrations continued across the host nation. Croatian Davor Suker won the Golden Boot for his six strikes while Brazil’s Ronaldo won the Golden Ball.

Brazilian flare lights up the orient – 2002

It was redemption time for Brazil as they compensated for their defeat in 1998, by cruising to their fifth title, beating Germany in the final.

South Korea and Japan earned the opportunity to become the first Asian nations to stage the big event, as they jointly hosted the 17th World Cup. It was the last World Cup to implement the ‘Golden Goal’ rule.

The co-hosts provided 10 venues each, while the International Stadium in Yokohama was set to host the grand finale.

In the group stage, Denmark, Senegal and Uruguay forced the exit of defending champions France. They were eliminated following defeats to Senegal and Denmark and a stalemate with Uruguay. Les Bleus, failed to score a single goal in the tournament, marking the worst performance by a defending title holder.

The game between Uruguay and Senegal staged a thriller, where a comfortable 3-0 lead by Senegal was undone by a 3-3 comeback by Uruguay. The group stage also saw an 8-0 thumping on Saudi Arabia by Germany and the elimination of Argentina following a 1-0 defeat to England and a subsequent draw against Sweden.

During the knockouts, Turkey ended Japan’s campaign with a 1-0 win, while Senegal overcame Sweden, following a golden goal by Henri Camara after the game ended 1-1 at fulltime.

Brazil beat England 2-1 with a winning goal that came from a sublime Ronaldinho free kick. South Korea entered the semi-final beating Spain in a match which ended with much controversy as two goals by Spain were disallowed. South Korea became the first Asian team to reach the semi-finals.

Germany edged past South Korea in the semi-finals, with a goal from Michael Ballack to enter the final. But much to the despair, the German received a yellow card, forcing him to miss the final on accumulated yellow cards.

Brazil and Germany met on 30th June 2002 at Yokohama to compete for gold. The star-studded Brazilian side were eyeing to requite for the disappointing final four years before.

Coming into the finals, their main striker Ronaldo, was already on 6 goals. During the finals, Ronaldo stepped in, scoring both goals in Brazil’s 2-0 victory over Germany to secure their fifth World Cup title.

Ronaldo also finished the tournament as the top scorer with eight goals while Oliver Kahn won the Golden Ball.

Brazil became the first team since Argentina in 1986 to win the trophy without the need of a penalty shootout at any stage of the tournament. The ‘Selecao’ also became the first champion team to win every match at the tournament since 1970 and set a record for the highest aggregate goal difference (+14) for a World Cup winner.

Skipper Cafu, who appeared in his third successive final, hoisted the FIFA World Cup trophy to the night sky of Yokohama, bringing relish to the football-crazy nation.

7 Standout players at the Mercantile Sevens