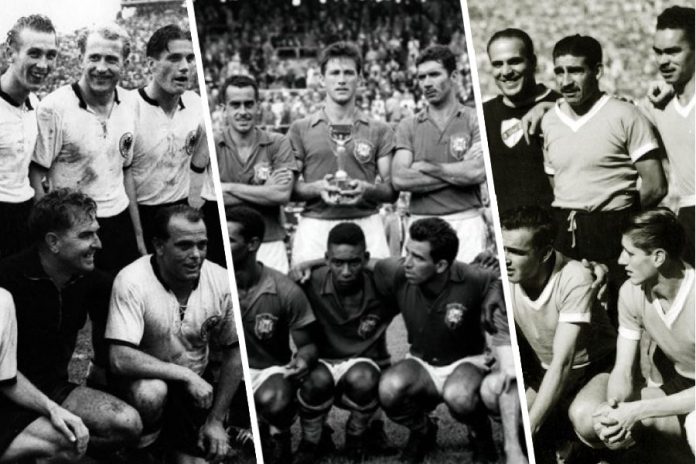 Following its 1938 edition in France, the FIFA World Cup was halted for 12 years due to the Second World War.

The FIFA World Cup needs no introduction. It is the pinnacle of world football..

As a result, Italy held their World Cup reign for a record 16-years, from 1934 to 1950. It was said that the Vice-President of FIFA, Dr. Ottorino Barassi, hid the trophy in a box under his bed during Second World War to save it from falling into enemy hands. The greatest football show on the planet recommenced in 1950.

The tournament, after a 12-year gap following the destruction of a World War, returned to South America as Brazil was chosen as the host nation. It was a golden opportunity for the football-crazy nation as they were seeking their first title.

A new format was introduced as the tournament featured a round robin at the final stage. The reason behind this choice was that the organizers had to spend large sums of money on stadiums and infrastructure. A knockout tournament, such as in 1934 and 1938, would feature only sixteen games, while the proposed two-group format would guarantee more games, and thus more ticket revenue.

In addition, this format would guarantee each team at least three games, and thus provide more incentive for European teams to make the journey to South America and compete. FIFA, at first resisted this proposal, but allowed it after Brazil threatened to step down as hosts.

Brazil built the biggest football stadium in the world, the ‘Maracana’ in Rio de Janeiro to host the final. Moreover, cities of Sao Paulo, Belo Horizonte, Curitiba, Porto Alegre and Recife were among the host cities.

Although 16 teams qualified for this edition, only 13 teams took part, as Turkey, Scotland and India withdrew from the draw. Scotland withdrew, following their stance of the Home Championship, while Turkey raised financial problems related to travelling. India too, cited travelling costs and issues related to team selections, practice time and valuing Olympics over FIFA World Cup.

France, who took one of the places, withdrew later, nearing the start of the tournament. England were the only team that made its debut.

Italy lost their unbeaten run at the World Cup as they were defeated 3-2 by Sweden in the first round. Hosts Brazil were the hot favourites as they dismantled every possible obstacle on their way as they recorded huge wins against Mexico (4-0), Sweden (7-1) and Spain (6-1).

The final group stage involved Brazil, Sweden, Spain and Uruguay, who appeared after their inaugural win in 1930. As the tournament featured a round robin format, the deciding game or the ‘de facto final’ became the match between Brazil and Uruguay. The hosts needed a draw to secure the title while a win was essential for Uruguay.

On July 16th a crowd of 199,854 crammed into the Maracana with high expectations for Brazil to clinch the title. The most watched football game in history, mounted pressure on the hosts which was a blessing in disguise for the underdogs Uruguay.

However, Brazil took the lead in the game, two minutes into the second half, but Uruguay equalized in the 66th minute and with eleven minutes to spare, they did the unthinkable as Ghiggia scored the winning goal. Uruguay’s appearance after the 1930 edition crowned them as champions for the second time leaving Brazil in despair.

Brazil’s surprise defeat later gave birth to the term ‘Maracanazo’ which is used to express a defeat that was not expected. Ademir of Brazil became the top scorer with 8 goals. A total of 88 goals were scored in 22 games.

The 1954 edition saw Switzerland becoming the smallest country to host a World Cup. It was a goal fest, as the tournament set the record for the all-time highest number of goals in a single edition as well as the highest goal average per game.

A staggering 140 goals were scored in 26 games, with an average of 5.38 goals per game. Six cities hosted games where Wankdorf Stadium in Bern was prepared for the finals.

ungary became the premier striking force, spearheaded by Sandor Kocsis who ended up with 11 goals for the tournament. Led by the legend Ferenc Puskas, they stormed to the finals, with wins against South Korea (9-0), West Germany (8-3), Brazil (4-2) and Uruguay (4-2). Their game against Brazil was known as the ‘Battle of Bern’. The infamous showdown produced 42 free kicks and three send-offs.

Sepp Herberger, the coach of Germany gambled against the seeded team of Hungary by sending in a reserve side to take an expected 8-3 loss, with the only consequence being the additional playoff game against Turkey which was ultimately won 7-2.

West Germany met Hungary in the finals. The ‘Golden Team’ of Hungarians were the favourites as they entered the final with a 32 game unbeaten streak. It started raining on the day of the finals which became a blessing for the Germans as the skipper Fritz Walter was known to play at his best in rainy conditions.

Adolf Dassler (founder of Adidas) provided the shoes with exchangeable studs. Having been defeated 8-3 in the group stage, West Germany turned the tables as they won 3-2 in a hotly contested encounter, which later became to be known as ‘The Miracle of Bern’.

Few controversies remain in the final. During the 2-2 equalizer by West Germany, footage showed that Hungarian goalkeeper Gyula Grosics was obstructed by Germen winger Hans Schäfer. Later, Puskas’ equalizer in the 87th minute was ruled offside, much to the fury of the Hungarians.

There were also doping allegations on the German team, which surfaced much later in 2010. However, the football world welcomed the new champions West Germany, while Hungary had to settle down as runners-up for the second time in their history.

For the first time, television coverage was provided and special coins were issued to mark the event. West Germany also became the first team to win the World Cup after losing a match at the group stage. Their win is considered one of the greatest upsets of all time.

The German team consisted of amateur players, as Germany did not have a professional league at the time. It was the only time that an amateur team won a FIFA World Cup. Named as the Best Player in the Tournament, captain Ferenc Puskas later became the all-time top scorer for the Hungary national team with 84 goals and later appeared for the giants Real Madrid in 180 games, scoring 156 goals.

Brazil finally won their first World Cup at the 1958 tournament held in Sweden. In their first-round match against the Soviet Union, they introduced two new players, a winger called Manuel Francisco dos Santos, known as ‘Garrincha’, and a 17-year-old called Edson Arantes do Nascimento, or more simply, Pele. France, had a star striker of their own, Just Fontaine, who eventually set a remarkable record of 13 goals in a single tournament.

The Brazil-England match in the first round, became the first goalless draw in world cup history as England held off the powerful striking force of the South American nation at Gothenburg. The English side had been weakened by the Munich Air Disaster which killed 3 internationals on the books of Manchester United, including England’s young star Duncan Edwards.

Argentina suffered their worst defeat in history as they lost to Czechoslovakia 6-1 which subsequently knocked them out of the campaign. During the group stage, Just Fontaine netted 6 goals while he continued his form until the semi-finals where they were eventually knocked out 5-2 by Brazil with young Pele scoring a hat-trick.

The third-place match saw Fontaine scoring four more goals, as France defeated Germany 6-3. This brought his total to 13 goals in one competition, a record that still stands.

Out of the twelve venues across Sweden, Rasunda Stadium in Stockholm hosted the final between Brazil and hosts Sweden. However the hosts were no match as Brazil demolished Sweden 5-2 to win their first ever world cup. Pele again made his contribution with two goals in the final finishing the tournament with 6 goals.

Sweden 1958 became the first World Cup to give international television coverage and it was the first World Cup without the founder Jules Rimet who died in 1956. For the first and only time, all four British countries qualified, with Wales and Northern Ireland, who ousted Italy, making their debuts.