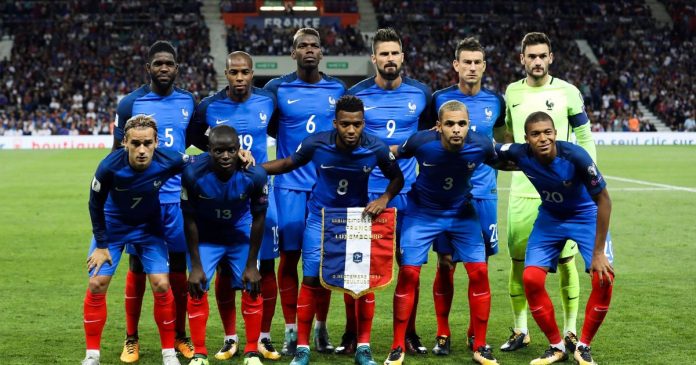 Having narrowly missed out on continental glory two years ago at Euro 2016, the strong French national team will head into the World Cup as one of the favourites.

France have some of the biggest names in world football in their squad and have plenty of talent and depth to prove that their favourites tag is well deserved.

Mohamed Salah’s Egypt has made it to the FIFA World Cup..

France made their first big impression at the World Cup in 1958, when they finished 3rd. They repeated the feat in 1986, before finally winning the World Cup in 1998 with a team that boasted a similar crop of global superstars as the present outfit.

Captained by current coach Didier Deschamps, the 1998 French team comprised of heavyweights such as Zinedine Zidane, Thierry Henry, David Trezeguet, Lilian Thuram and Emmanuel Petit. Since then however, apart from a runners-up finish in 2006, the French teams of past have failed to live up to their potential, having been eliminated twice in the group stages in the following World Cups.

France qualified rather comfortably at the top of Group A with 23 points, courtesy of 7 wins, 2 draws a solitary loss against group runners-up Sweden. Their qualification campaign was not a particularly memorable one, as despite a good defensive record where they conceded just 6 goals, they scored just 18 goals which was the joint second lowest amongst group winners in European qualification.

The two draws they registered were drab 0-0 performances against Belarus (away) and Luxembourg (home), fixtures in which Sweden were able to bag 12 goals. Since their qualification ended, they have played better in the recent friendly encounters beating Wales (2-0) and Russia (3-1) whilst drawing with Germany (2-2).

Didier Deschamps took over the reins as national team manager following Euro 2012. He will undoubtedly look to build on the success of their Euro 2016 campaign where they fell short at the final hurdle, losing to Portugal 1-0 in extra time.

During qualification he mainly employed a 4-2-3-1 formation playing key forward Antoine Griezmann behind the center forward. The system has provided a solid base for them to push forward from, giving them a balanced approach to the game.

However, one issue with the system is that similar to in Euro 2016, the mercurial Paul Pogba is limited to a more defensive role which has hampered their full potential in getting forward.

One of France’s biggest strengths is their impressive depth of talent, they could easily field 2 squads of 23 comprising top international talents capable of challenging the best of teams. Their bench strength will be key in order to rotate their stars and keep players fresh if they are to go the distance.

They also have two of the hottest young prospects in World football in Ousmane Dembele and Kylian Mbappe and both players have the pace to cause serious problems to any defence if they get the opportunity.

Amongst weaknesses, coach Didier Deschamps still has his doubters, with regards to his ability to truly get the best out of the talent available to him and his tactics will need to be on point when they come up against the heavyweights in the knockout rounds.

Injury casualties include Laurent Koscielny who would certainly have made the squad but misses out due to injury, and Dmitri Payet who injured his hamstring in the Europa League final, eliminating his chances of making the World Cup squad as well.

Amongst other concerns, Benjamin Mendy and Ousmane Dembele have only recently returned to first team football after recovering from injuries of their own and may be still a bit short of match practice.

Antoine Griezmann has been France’s best player over the past two years, and after winning the Golden Boot and Player of the Tournament at the Euros, he ended qualification as joint top goal scorer and top assist provider amongst the French squad with 4 goals and 4 assists.

Olivier Giroud was the preferred number 9 for most of the qualification campaign and he too bagged 4 goals alongside 1 assist. Dmitri Payet was another consistent in the lineup, scoring 2 goals with 2 assists from midfield and Paul Pogba also contributed with 2 goals from midfield during the qualifying campaign.

Raphael Varane has been their most reliable center back and is likely to partner up with Samuel Umtiti, whilst Djibril Sidibe have been a first choice full-back for the large part of their campaign and gets forward well down the right. Skipper Hugo Lloris has worn the armband since 2012 and led by example, keeping 4 clean sheets across the 9 games he played.

Antoine Griezmann is probably going to be France’s biggest star at the World Cup, but Kylian Mbappe is one of the players everyone will want to see play for the French team. Despite having limited opportunities during qualifying, the forward has had a stellar season for PSG this season scoring 21 goals and providing 11 assists.

His electrifying pace and impressive technical ability has already seen him draw comparisons to Thierry Henry, and the FIFA World Cup could be the stage where he makes the shift from a prodigious talent to a global superstar.