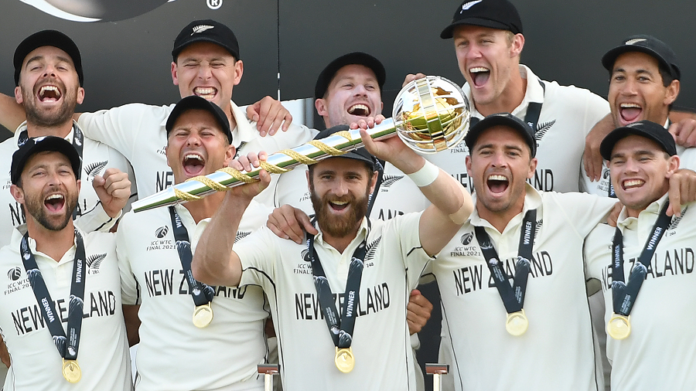 The second edition of the ICC World Test Championship begins this week with the highly anticipated five-match series between England and India.

A quick guide covering everything you need to know.

WHAT IS THE WORLD TEST CHAMPIONSHIP?

A nine-team global tournament, the WTC is a two-year competition that sees an undisputed World Test champion crowned at the end of a league campaign and a showpiece decider.

The format of the second edition is the same as the original – though the point system has changed – with each team playing three home and three away series to determine the qualifiers for the WTC Final.

The date and location of the Final will be announced at a later date.

HOW MANY TEAMS AND WHO ARE THEY?

The points system for the inaugural WTC has been overhauled for the second edition.

With all teams playing the same amount of series, it was originally planned for the two teams that collected the most points at the end of the cycle to progress to the final.

With the COVID pandemic causing major changes to the Test programme, it was decided that the percentage of available points collected would determine the standings.

In 2021-23, the percentage of available points collected will once again determine the standings but the amount of points available per Test has been made uniform.

No matter the length of the series, each Test will now see 12 points awarded for a win, four for a draw and six for a tie. Hence, a five-Test series will have a total of 60 points available and a two-Test series a maximum of 24.

As became the case in the previous edition of WTC, the standings will be determined on the percentage of available points collected.

This system allows the relative performance of teams to be compared at any point in time, meaning the cancellation of any matches or series for any reason does not directly impact the points table.

It will also standardise the imbalance in the number of matches played by teams.

🔸 12 points available every match, irrespective of series length 🔸 Teams to be ranked on percentage of points won

While the teams may not play the same amount of matches in the WTC cycle, each team will play six WTC series – three at home and three away.

The series each team will play are outlined below.