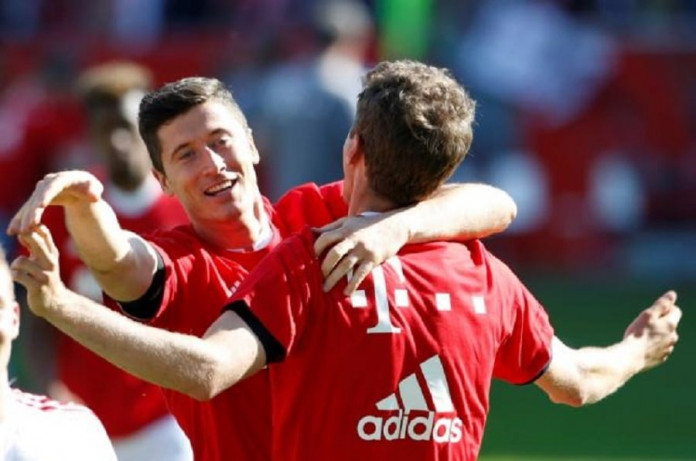 In Spain, Barcelona remain in pole position but old foes Real Madrid can still cash in if they falter on the last weekend of La Liga.

In England, the celebrations went on at Leicester City as they marked their fairytale Premier League success with another win while champions Juventus’ long unbeaten streak in Italy came to an end.

The title race will go down to an exciting, and not unfamiliar, two-team race on the final day with Barcelona in pole position to pip old foes Real Madrid in La Liga.

Barca are one win away from a 24th title following a 5-0 derby thrashing of Espanyol, featuring yet another double from Luis Suarez and goals from Lionel Messi, Rafinha and Neymar.

Real are a point behind after a familiar Cristiano Ronaldo double helped them beat Valencia 3-2. If Barcelona fail to win at Granada next week, Zinedine Zidane’s side can lift the title with victory at Deportivo La Coruna.

If they finish level on points, Barca will prevail because of their superior head-to-head record. Atletico Madrid blew their chance with a shock 2-1 defeat at relegated Levante.

Second-placed Borussia Dortmund, who face Bayern in the German Cup final on May 21, lost 1-0 at Eintracht Frankfurt as Bayern celebrated their first silverware of 2016 in coach Pep Guardiola’s final season, four days after their Champions League semi-final exit scuppered their treble hopes.

Borussia Moenchengladbach are almost certain of a fourth- place finish and a spot in the Champions League qualifying round after defeating Bayer Leverkusen 2-1.

Leicester City marked their sensational Premier League triumph in fitting style, lifting the trophy amid jubilant scenes at their King Power Stadium as Jamie Vardy scored twice in a celebratory 3-1 win over Everton.

At the other end of the table, Sunderland look favourites to avoid relegation after another Jermain Defoe goal helped them sink Chelsea 3-2.

Norwich City and Newcastle United look poised for the drop, the Canaries losing 1-0 to a Juan Mata goal for Manchester United while the Magpies drew 0-0 at relegated Aston Villa.

Second-placed Tottenham Hotspur were beaten 2-1 at home by Southampton, leaving them two points ahead of old rivals Arsenal going into next Sunday’s final round of matches after the Gunners drew 2-2 at Manchester City.

Champions Juventus were stunned 2-1 by bottom club HellasVerona as the retiring Luca Toni marked his final match by scoring a first-half penalty.

The race for the second automatic Champions League spot willgo to the final day as Napoli beat Torino 2-1 and AS Roma cruised past Chievo 3-0 with substitute Francesco Totti receiving an emotional reception on his 600th league appearance.

Napoli are second on 79 points with Roma two points behind. Frosinone were relegated after losing 1-0 at home to Sassuolo.

PSV Eindhoven retained the title after their great rivals Ajax Amsterdam blew their chance when they failed to beat second-bottom De Graafschap in a dramatic final round of matches.

PSV won 3-1 at PEC Zwolle to move to 84 points from 34 games, lifting the title by two points from Ajax who were held to a 1-1 draw when victory would have made them champions on goal difference.

Luuk de Jong netted twice for PSV to take his season’s tally to 26 goals, one behind AZ Alkmaar’s Vincent Janssen at the top of the charts, after Juergen Locadia had given them an early lead.

While PSV manager Phillip Cocu and his men celebrated, it was a painful day for Ajax who had led the league for most of the season only to falter against De Graafschap, a team they had beaten in every match for the last 16 years.

Olympique Lyonnais hammered Monaco 6-1, in amatch billed as a second-place decider, to move three points clear of their rivals and into pole position for the last automatic Champions League berth.

Alexandre Lacazette bagged a hat-trick and Mapou Yanga-Mbiwascored twice for Lyon. Monaco’s Lacina Traore was dismissed for a second yellow card midway through the first half.

Lyon have 65 points and a vastly superior goal differenceafter 37 games. Monaco are on 62 and could miss out on the top three altogether if they fail to beat Montpellier and Nice win at Guingamp next weekend.