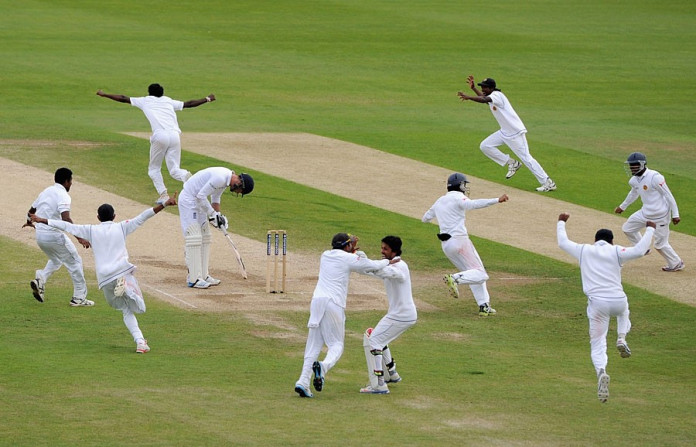 After a prolonged break, cricket fever will return to Sri Lanka as the Lions make their way to the birthplace of Cricket to take on rivals England in a three match Test series which will be followed by the shorter versions of the game.

Sri Lanka played their inaugural Test against England in 1982 and since then, the two teams have engaged in a fierce rivalry. Let’s take a close look at the Test numbers between the two sides.

After obtaining Test status, Sri Lanka played their first ever Test on the 17th of February 1982 at the P.Sara Oval against England. It was the 921st match in the history of Test cricket. Bandula Warnapura led the Lions while Keith Fletcher captained the visitors.

It was a close tussle as Sri Lanka bowled out England conceding a mere 5 run lead but later England’s experience proved vital as they eventually turned the tables securing a 7 wicket win.

Sri Lanka’s first win against England came in 1993 when they recorded a 5 wicket win at SSC under the captaincy of Arjuna Ranatunga. Alec Stewart led the visitors this time.

Recap of the past decade

Sri Lanka’s visit to England in 2011 resulted in a 1-0 win for the hosts as they beat the Lankans by innings and 14 runs at Cardiff.

In 2012, England’s tour in Sri Lanka ended in a 1-1 Test series draw as Sri Lanka’s 75 run win at Galle was followed by England’s 8 wicket win at P.Sara Oval.

Perhaps the most thrilling Test series between the two sides happened when Sri Lanka toured England in 2014. Sri Lanka won the series 1-0; securing a stirring 100 run victory at Leeds on the penultimate delivery of the match after clinging on to  a dramatic draw in the 1st test at Lords.

Since their first Test on English soil in 1984, Sri Lanka has played 15 Tests in England.

The thriller in 2014 is the only game played between the two sides at Leeds.

Sri Lankans are yet to play a Test match at the Riverside Ground in Chester – le – Street.

England’s Test record at the venue –

To play a Test match at Lord’s is an ultimate dream of any cricketer. The ‘Home of Cricket’ has hosted the most number of matches on a single venue (131), 23 more Tests than its nearest contender MCG.

Reaching a century at Lord’s is a special milestone for every player. So far only 8 Sri Lankans have scored centuries at Lord’s. They are: Sidath Wettimuny, Duleep Mendis, Amal Silva, Marvan Atapattu, Mahela Jayawardene, TM Dilshan, Kumar Sangakkara and Angelo Mathews. Out of them, Mahela has scored two tons while Sidath Wettimuny, Amal Silva and Duleep Mendis reached three figures in the same Test match.

The iconic venue has hosted 7 Tests between Sri Lanka and England. England has won two of them while Sri Lankans are yet to record a Test win at Lord’s.

Most wickets – M.Muralitharan (112 wickets in 30 innings)

Most wickets for England – Matthew Hoggard (37 wickets in 17 innings)