Alex Hales and Joe Root missed out on warranted centuries but helped England post 310/6 against Sri Lanka at stumps on day one of the second Test at Riverside grounds in Durham on Friday.

Both right-handed batsmen fell in the 80s as some excellent catching kept Sri Lanka alive on a dry surface which provided enough assistance off the seam to fast-bowler Nuwan Pradeep who led the tourists’ commendable bowling performance with a three-wicket haul.

Earlier in the first session, after opting to bat first on an overcast morning, Alastair Cook and Hales started off cautiously by taking the shine off the new ball during their 39-run opening stand before the former played a rather loose shot away from his body and was caught at 2nd slip by Dimuth Karunarathne as Suranga Lakmal struck with the second ball he bowled from round-the-wicket. Cook failed once again to reach the magical 10000-run mark as he fell five runs short of it.

A few overs later, Pradeep surprisingly bowled a well-directed bouncer to one-drop batsman Nick Compton; the delivery took the top-edge and flew to deep square-leg where Lakmal took a stunning catch above his head and fell awkwardly inches inside the rope.

Hales completed his 3rd Test fifty in 131 balls and played some exceptional strokes and reached the 80s with a straight six off Milinda Siriwardana but the part-time left-arm spinner took his revenge soon when a fiercely-edged cut was brilliantly caught one-handed by Angelo Mathews at slip to end the 96-run stand for the 3rd wicket.

Root batted brilliantly by manoeuvring the field to showcase his class during his 20th Test half-ton but he was surprised by a steep bouncer from Pradeep which got the leading edge straight into the safe hands of Kaushal Silva at extra-cover.

James Vince was the next to depart after getting a good start as he drove aerial off Siriwardana which was sharply taken by Lahiru Thirimanne diving to his right at short cover.

At 227 for 5, Sri Lanka sensed an opportunity to close out the English innings but the in-form Jonny Bairstow and Moeen Ali constructed an important 70-run stand before Pradeep induced a bottom-edge for a wide cut shot to dismiss Bairstow for 48.

Ali (28*) and Chris Woakes (8*) played out the tricky final over to remain unscathed at stumps.

The match will be continued tomorrow for day two.

Can Sri Lanka restrict England to less than 350 on day two? State your opinion below. 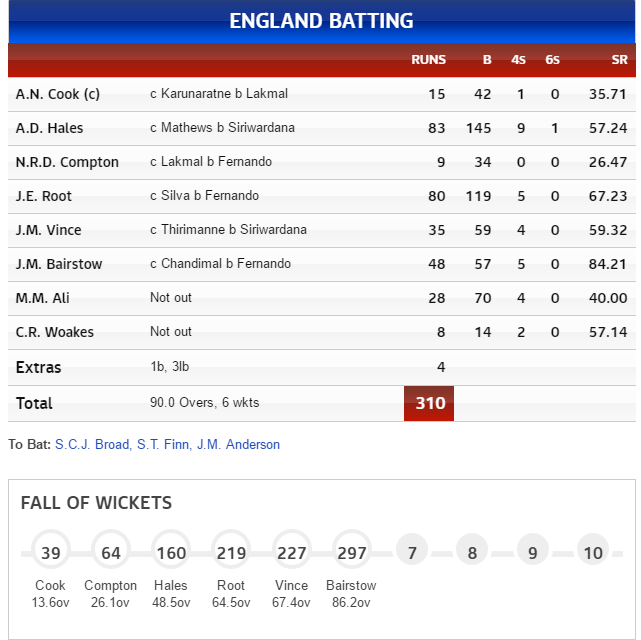