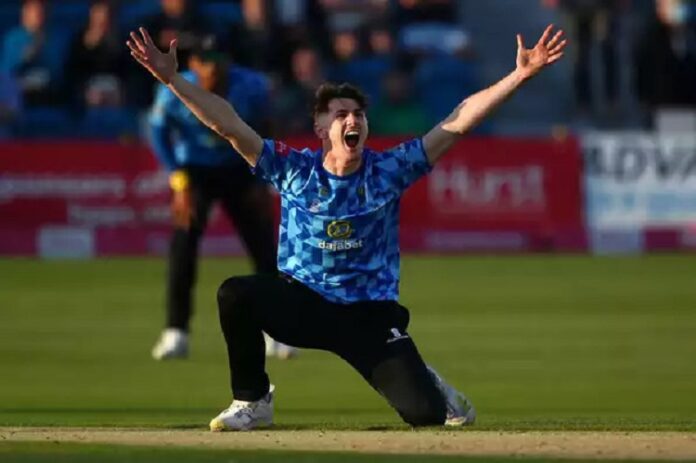 England have included left-arm pacer George Garton in their 16-member squad for the three-match ODI series against Sri Lanka, set to begin on June 29. Despite the absence of injured pacer Jofra Archer and all-rounder Ben Stokes, the England head coach Chris Silverwood announced a strong pace pack for the series on Saturday (June 19).

The 24-year-old Garton has played 24 List A games, picking 29 wickets. Conceding runs at more than run-a-ball, Garton neither has an impressive economy rate nor bowling average. However, his raw pace has been a standout feature of his bowling.

Speaking on Garton’s inclusion for the series, Silverwood said, “We have been monitoring the progress of George Garton for quite some time. He has been a significant part of Sussex’s bowling unit in white-ball cricket for an extended period. His ability to bowl quick with his point of difference being a left-armer certainly gives us options in this series, and he deserves his chance at this level.”

Barring the injured duo of Stokes and Archer, England haven’t rested any mainstays for the series, which has been a feature of their rotation policy during the pandemic era of international cricket. “This ODI series is important as we continue to build momentum ahead of the 2023 World Cup. Despite some injuries, the squad I have selected is strong and gives us depth across all departments. We are looking forward to competing and putting on a show for the fans,” Silverwood said.

Olly Stone has been diagnosed with a stress fracture of his lower back and has been ruled out for the rest of the English summer, while Saqib Mahmood and Reece Topley were also unavailable for selection due to their respective injuries.

“Several players are not available for selection due to injury. Jofra Archer (right elbow), Saqib Mahmood (abdominal) and Reece Topley (side strain) are all missing, but continue to make excellent progress from their respective injuries,” he added.

“We are pleased that Ben Stokes is returning to action with Durham this weekend after recovering from a fractured finger. If everything goes to plan, I hope he could be available for selection for the Vitality IT20 series against Pakistan next month.

“Unfortunately, following the second Test at Edgbaston against New Zealand, Olly Stone has been diagnosed with a stress fracture of his lower back and will miss the rest of the summer with the injury. It is a great shame as Olly was showing real promise with the ball and would have been part of our selection plans for this series.”

The three ODIs will be played on June 29, July 1 and 4 in Durham, Oval and Bristol respectively.