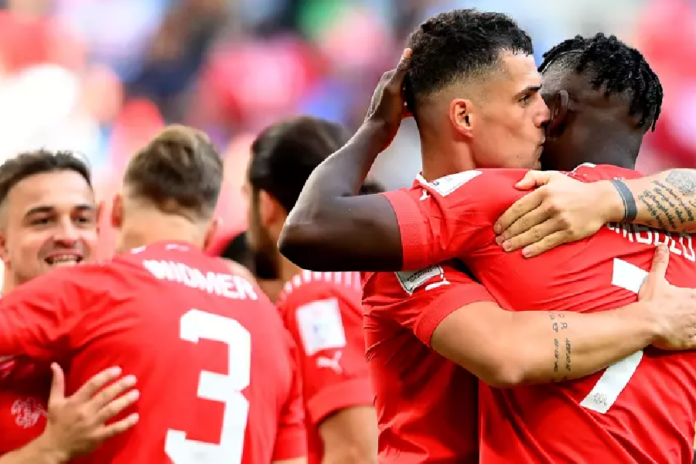 Switzerland came out on top in a game that had seemed in the balance until Embolo swept in to score just minutes after half time.

Switzerland edged their way to victory in a lively match against Cameroon thanks to a second-half goal from Breel Embolo, who scored against his country of birth.

However, in the early stages the African side looked most likely to make a breakthrough, Karl Toko Ekambi having an inch-perfect cross taken off his toes by the defender as he raced into the penalty area.

The Swiss too came close, Manuel Akanji heading wide from a corner, but it wasn’t until the second half that a goal threat really emerged. Just minutes after the break, a wonderful team move saw Switzerland pass their way from left to right, shifting through the gears, before Xherdan Shaqiri’s excellent pull-back put it on a plate for Embolo.

Cameroon remained a threat on the counter and via set-pieces – Andre Anguissa met a Bryan Mbeumo free-kick sweetly but the header was straight down Yann Sommer’s throat – but it was Switzerland who appeared most likely to add a second goal to the game.

Andre Onana smartly prevented Ruben Vargas from doubling the scoreline midway through the second half and Haris Seferovic had a late attempt bravely blocked as the scoreline remained 1-0.

It was a moment of deep respect as Embolo, born in Cameroon, gave a muted response to putting Switzerland ahead. Embolo’s hometown is the Cameroonian capital, Yaounde, but a young Breel left for France with his mother when he was just five years old. After relocating to Switzerland in 2014, he has become a mainstay in the Swiss squad.

Xherdan Shaqiri has been directly involved in exactly half of Switzerland’s 24 goals across their last four appearances at major tournaments (EUROs and World Cups). The explosive attacker has scored eight goals and assisted a further four, including one in this game.