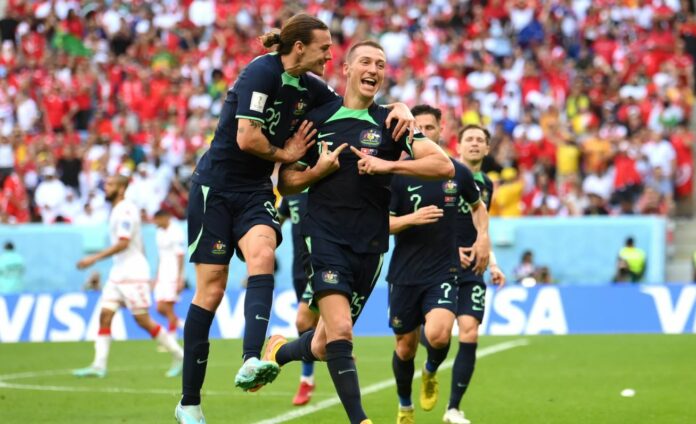 Australia’s chances of making the Qatar 2022 knockout stage received a massive boost with a battling win over Tunisia.

Mitchell Duke was the hero as Australia claimed their first FIFA World Cup win in over 12 years with a hard-fought victory over Tunisia at Al Janoub Stadium.The forward, who plays his club football for Fagiano Okayama in Japan’s second tier, provided the game’s decisive moment with a brilliant header midway through the first half.Tunisia, who were roared on by another passionate and highly vocal support, toiled tirelessly in search of an equaliser but often lacked in composure and inspiration in the final third.Australia defended heroically, too, no-one more so than Harry Souttar. The giant Scotland-born defender earned hugs and high fives from his team-mates late in the first half when he threw himself to block from Mohamed Drager with a goal seemingly inevitable.Tunisia’s best chances thereafter came when Youssef Msakni fired wide from close range and, later, when Wahbi Khazri shot straight at Mat Ryan during some frantic closing stages.

Duke has never been a high-profile or much-lauded member of Australia’s squad. That will all change now, though, after he provided a goal of real class and intelligence to secure this landmark win.Remember Jared Borgetti’s match-winner for Mexico against Italy in 2002? This had shades of that famously crafty header, with Duke – despite facing away from goal – determining just the right amount of contact and re-direction needed to divert Craig Goodwin’s cross just inside the far post.

In 17 previous World Cup matches, Australia had never once led at half-time. This match represented a notable first, therefore, and paved the way for the Socceroos to end a seven-match winless run at the global finals.