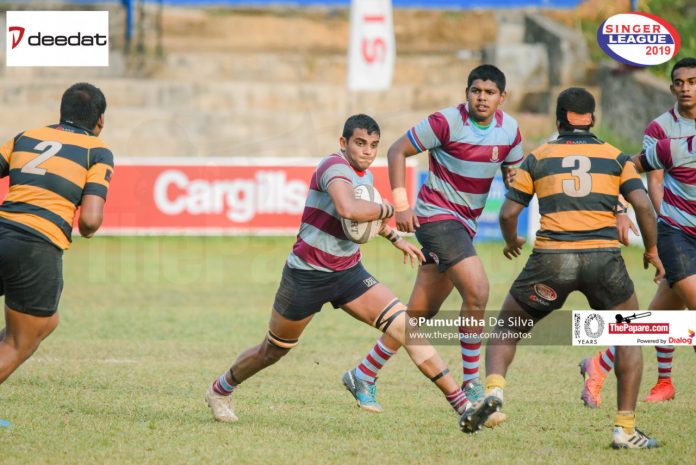 It was a twist of events at Nittawela when Dharmaraja College scored a try in the final minute of the game with a conversion to decide the fate of both teams. In the end the kick was cleared by Saumya Wijesiri as the Rajans came from the back to take away the game from D. S. Senanayake College 14-13.

Despite the scoreline reading with just a 1 point gap, D. S were guilty of botching up chances and both sides made cardinal errors. However the first three minutes of the game was free flowing rugby until D. S knocked the ball forward. D. S were holding onto possession through their big forwards and whenever the Rajans got the ball, it was kicked numerous times back into the hands of the visitors. In fact the first try came off Saranga Udawatte where he made a dash towards the try line from a bad cross kick by the Rajans. Despite scoring in the right corner, he missed his own conversion (DRCK 00 – DS 05)

Through out the game, the line outs were not accurate and countless penalties were awarded. However the visitors secured most of the possession especially with the big prop forward Joel Kumara being the battering ram, sucking in at least 3 defenders in every carry. D.S had their chances to score especially through the pick and go but the Rajan defenders held their nerves until halftime.

The second half started with many errors from the start especially with misjudged kicks and gifted penalties to the opposition. D. S were unlucky on a number of occasions to run the ball down their backline after their forwards made hard yards. However it was once again Saranga Udawatte who touched down from the right corner after 3 defenders failing to bring him down from the 22m line. He missed the conversion from the difficult angle despite all the hard work put into scoring that try. (DRCK 00 – DS 10)

The last 10 minutes were crucial for DS as the Rajans managed to crawl their way into the DS half using the pick and go. However due to a number of offences and high tackle on the try line, a penalty try was awarded to Dharmaraja and were desperate to comeback into the game. (DRCK 07 – DS 10)

Disaster struck the DS outfit when their prop forward Malshan Vimukthi was yellow carded and had to defend with just 14 men. With time running out, Saranga Udawatte pointed towards the goal opting for a 3 pointer and kicked the 35m penalty. This meant that the Rajans need a converted try to win the game. (DRCK 07 – DS 13)

The restart went in favour of the Rajans and were hanging onto dear possession using the pick and go. They were extremely close to the try line, surrounded by the cheers of the spectators until Tharindu Kapuwatte finally managed to crawl over the white wash. It was now or never with an all important conversion to come. Rajans full back Saumya Wijesiri cleared the conversion and turned the whole game despite the early lead by D. S to the delight of all the home spectators for securing a magical one point victory.