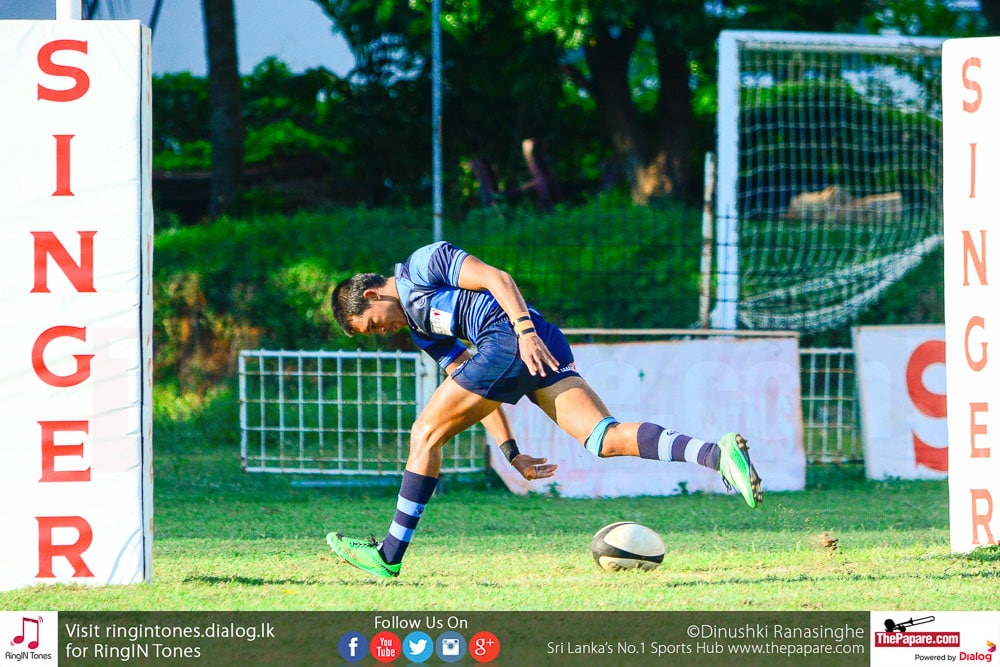 A below par performance by Dons gave them their third loss the season against the double blues. Wesley college managed to decimate D.S.Senanayake College 64-12(10T, 7C- 2T, 1C). D.S. were mediocre from the get go enabling Wesley to run in 10 tries.

Though D.S were able to score within the first quarter of the game they could not keep that momentum throughout the game. Conceding tries at regular intervals did not make the situation any better.

Coach Jeevan had made few changes in the starting lineup for Wesley. Taariq Jurangpathy started off the game as fly half Murshid Zubair was ruled out due to a knee injury and J. Jayawardene started at hooker for Shamail Amit. Meanwhile former skipper Omar replaced Avantha Hashan on the wing.

Awantha Lee, the outside center for the blues managed to sneak in between the center backs and off-load the ball to his twin Avishka Lee which led on to the first try for the game scored and converted by Avishka. Just minutes later the Wesleyites scored a second try when an up and under was not collected by the opposition skipper A. Muzmi. The opportunity was seized by winger Dineru Ranaweera who collected the ball just after the first bounce and found his way under the post comfortably. Avishka added the extras.

An unstoppable rolling maul gave D.S their first try. A line out well driven from 5 meters out saw blind side flanker R.W. Samarawickrama open the scoring for the Dons which was then converted by their skipper. 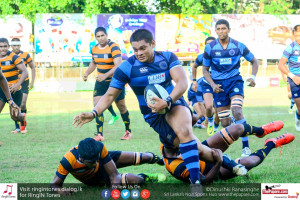 Getting back on track Wesleyites compiled many phases before going over for their 3rd try. From around in the opposition’s 22, the ball was sent out to Taariq who made a single dummy and touched down under the post while Avishka put through the conversion.

Yet again an up and under was fumbled by Muzmi, enabling Omar to grab the ball and pop it to Awantha who stepped his way under the post. Avishka added the extras. Wesley were now leading 28-07.

Omar making the maximum of his speed scored the 5th converted try of the game when he stole the ball easily and ran past several defenders. Just before the breather Captain Zayan Sabar added another 5 points which was not converted.

The uneven game in the first half went down to a pretty physical level in the beginning of the second half. With both teams struggling with the ball in hand. Turn over ball for Wesley was beautifully worked through the line when Awantha Lee tried to sneak in again. This time he was tackled by both the centers, but that did not stop him and his offload to Omar helped him get the first try of the half. 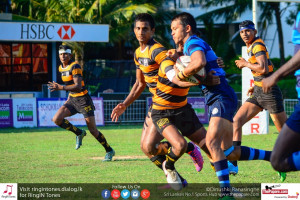 A Few minutes later, the Wesley forwards built up many phases before sending it out for the backs to score in the corner. After numerous attempts from the forwards to break the line, finally the ball was fed to backs and ended up with Awantha Lee who walked over the try line. Jurangpathy added the extras.

Of the last 2 tries which was scored by D.U.Saumya and Avntha Hashan only one was converted Jurangpathy. Later on D.S added 5 pointer when the no.08 A. Safwan blew through the defense.

Speaking to ThePapare.com Coach Jeevan stated “the boys played well and were up to the level of expectation.”

Outside center Awantha Lee who was rock solid in defense and mercurial in attack is ThePapare.com man of the match.